In October, the House of Representatives Committee on Ways and Means (Ways and Means) released an analysis of their year-long investigation into the misuse of race in clinical decision support tools. This report followed the September release of recommendations from the joint National Kidney Foundation (NKF)-ASN Task Force on Reassessing the Inclusion of Race in Diagnosing Kidney Diseases. The task force recommended immediately implementing new equations to estimate kidney function that do not use race as a factor, making nephrology the only medical specialty besides obstetrics and gynecology to make such a recommendation.

With jurisdiction over much of health care policy, including the Medicare and Medicaid programs, Ways and Means is one of the most powerful committees in Congress. In September 2020, Representative Richard Neal, who chairs the committee, focused on the use of race in clinical algorithms and clinical decision support tools as part of a broader effort to increase equity in health care.

The resulting report , Fact Versus Fiction: Clinical Decision Support Tools and The (Mis)Use of Race, describes 31 responses to letters of inquiry from Chairman Neal to medical professional societies, including ASN, that utilized clinical decision support tools including a race variable and a subsequent request for information from the committee.

The committee found that, broadly, “there is a need and desire for professional medical societies to lead the way in a critical reexamination of how race and ethnicity data, when used improperly…can create worse outcomes for patients of color.” According to the committee, “the scientific and medical communities have much work to do to achieve consensus on a path forward.”

The report also described a committee directive for the appropriate utilization of demographic data in health care, noting that “data on race and ethnicity should be used to measure the social and health impact of racism—not for biological racial distinctions. Overall, health care must be race-conscious—rather than race neutral or colorblind—if it is to succeed in ending racial health inequities.”

Through its year-long work, which included interim and final reports, the NKF-ASN Task Force on Reassessing the Inclusion of Race in Diagnosing Kidney Diseases made strides toward a race-conscious kidney health care by advancing recommendations to diagnose kidney diseases without the use of a race variable.

Specifically, the task force recommended “immediate implementation of the CKD-EPI equation refit without the race variable”; “national efforts to facilitate increased, routine, and timely use of use of cystatin C” to refine diagnoses for people with or at risk of kidney failure; and supporting further “research of GFR estimation with new endogenous filtration markers” for kidney diseases and “interventions to eliminate race and ethnic disparities” in kidney health. Together, these recommendations advance a framework for diagnosing kidney diseases that will increase equity in kidney health. 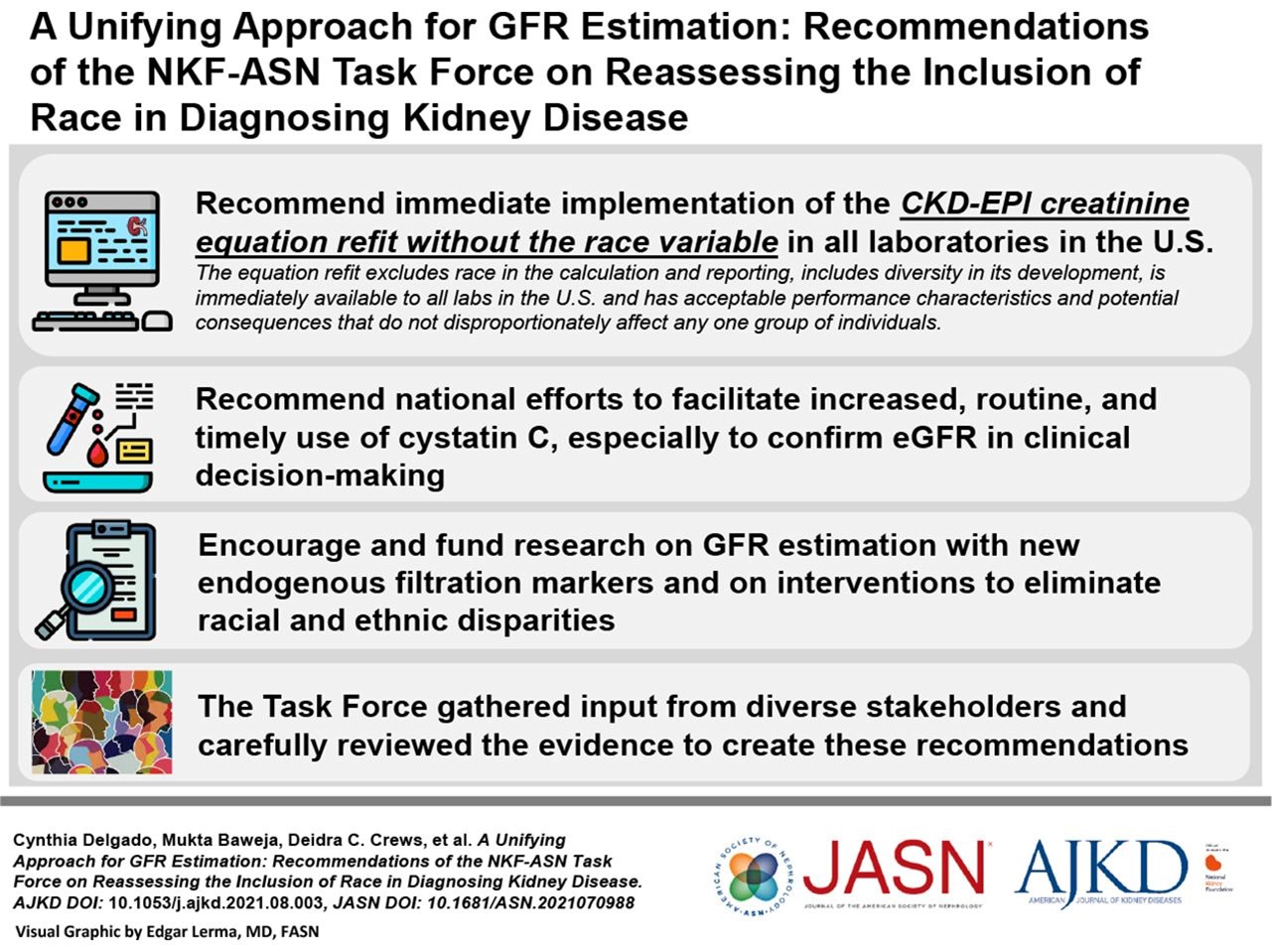 “As the largest organizations representing kidney patients and health professionals, NKF and ASN are committed to eliminating health disparities that harm kidney patients and ensuring that racial bias does not affect the diagnosis and subsequent treatment of kidney diseases,” said ASN President Susan E. Quaggin, MD, FASN, in a statement. “By recommending the CKD-EPI creatinine equation refit without the race variable, the task force has taken action and demonstrated how nephrology continues to lead the way in promoting health care justice. It is time for other medical specialties to follow our lead, and NKF and ASN stand ready to help however we can.”

For example, ASN Executive Vice President Tod Ibrahim presented, “Clinical Algorithms and Race,” during the Council of Medical Specialty Societies (CMSS) Virtual Annual Meeting in October. CMSS includes 47 medical specialty societies, including ASN, and these societies represent more than 800,000 physicians in the United States. Mr. Ibrahim used this opportunity to urge his colleagues to “assert, as soon as possible, that race is a social construct and not a biological determinant; genetic variation is greater within, rather than between, racial groups; health care based on skin color has no place in 21st century medicine; and your society is committed to eliminating race from clinical algorithms.”

Ways and Means has recognized and welcomed ASN’s efforts to increase equity in the diagnosis of kidney diseases. In WIRED, Chairman Neal commended the recommendations of the NKF-ASN Task Force, saying, “I hope others will follow their lead as we work together to create a more equitable health system for all.”

ASN’s partnership with NKF was further recognized in the committee’s report, which points out that “few societies addressed this question of communicating with patients. Some suggested disseminating information directly to patients and communities, while others suggested training providers to inform patients. The American Society of Nephrology (ASN) emphasized the role of patient-led organizations.”

In addition to Ways and Means, other leaders and organizations across the federal government have taken a vested interest in ensuring clinical support tools are bias free and increase equity in health care. In September 2020, Senator Elizabeth Warren and three other members of Congress requested that the Agency for Healthcare Research and Quality (AHRQ) review “the use of race-based clinical algorithms.” AHRQ announced multiple requests for information seeking public comment on the use of race in clinical algorithms. These and related efforts at federal agencies, including the National Institutes of Health, are aligned with the Biden Administration’s Executive Order on Advancing Racial Equity and Support for Underserved Communities Through the Federal Government, which establishes that it is the “responsibility of the whole of our Government” to “recognize and work to redress inequities in their policies and programs that serve as barriers to equal opportunity.”

As NKF focuses on implementing and communicating the task force’s recommendations, ASN is engaging with Ways and Means, Chairman Neal, Senator Warren, AHRQ, NIH, and other stakeholders to highlight the work of the task force and advance public policy that promotes a race-conscious diagnosis of kidney diseases and increases equity in kidney health. ASN will continue to provide updates on the policy efforts to institute the task force recommendations and the development of policies to eliminate disparities in kidney health.

In Fact Versus Fiction: Clinical Decision Support Tools and The (Mis)Use of Race, Ways and Means asserted that the “actions of professional societies and associations will be critical to addressing the embedded issues, and there is growing response to the need for their leadership on these and related issues.” ASN stands ready to answer this call and lead the field of medicine toward health equity.