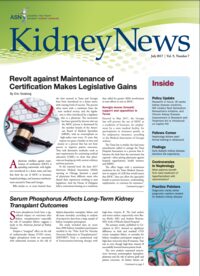 Particularly in interaction with donor age and pathway of death, total ischemic times of 14 hours or longer are associated with increased rates of adverse allograft outcomes in deceased donor kidney recipients, reports a study in Transplantation.

The researchers analyzed the impact of total ischemic time and graft outcomes in 7542 patients receiving their first deceased donor kidney transplant in Australia and New Zealand between 1994 and 2013. Total ischemic time included warm and cold ischemia: from the time of donor renal artery interruption/clamping to release of the renal artery clamp in the recipient. The authors hypothesized that donor characteristics and the pathway of donor death would affect graft outcomes. Median follow-up time was 5.3 years, with an interquartile range of 8.2 years.

Prolonged ischemia of 14 hours or longer was recorded for 48.7% of recipients. At follow-up, graft loss occurred in 59.6% of patients with prolonged total ischemic time and 40.4% of those with a shorter ischemic time. Rates of graft loss were 99.4 versus 58.7 per 1000 person-years, respectively.

Delayed graft function (DGF) occurred in 13.5% of recipients with total ischemic times of 14 hours or longer versus 10.9% of those with shorter ischemic times. This effect was greatest for those with donors aged 55 years or older. The adjusted odds ratio (OR) for DGF associated with prolonged ischemic time was 1.79 with older donors versus 1.45 with younger donors.

Prolonged total ischemic time was also associated with an increased risk of overall graft loss, OR 1.09, and increased overall mortality, OR 1.13. The pathway of donor death also had a significant impact: among recipients of kidneys from older donors with donation after cardiac death, the risk of allograft loss was at least three times higher for those with total ischemic times of 14 hours or longer.

Prolonged total ischemic time is associated with an increased risk of adverse outcomes in recipients of deceased donor kidneys. The effect is even greater with organs from older donors—especially those with circulatory death. The authors discuss the implications for “appropriate and optimal use” of kidneys from older donors and those with comorbid conditions [Wong G, et al. The impact of total ischemic time, donor age and the pathway of donor death on graft outcomes after deceased donor kidney transplantation. Transplantation 2017; 101:1152–1158].