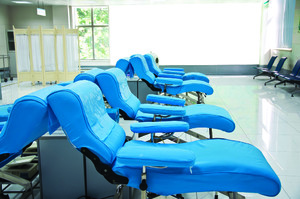 A quietly flourishing sector of the hemodialysis products market is dialysis chairs. According to a new draft report from Persistence Market Research, the market for hemodialysis chairs in India is growing quickly as the number of people with chronic kidney disease worldwide increases.

The rate of growth in the hemodialysis chair market in India is 31% per year, the highest noted in the draft report, which will be published in July 2017. Overall, the number of patients with diabetes in India will more than double by 2040. Online lists of dialysis chair manufacturers and suppliers in India and China are lengthy.

The market report, “Hemodialysis Chairs Consumption Market: Global Industry Analysis and Forecast 2016–2024,” states that the growth rate for the dialysis chair market in the US is 6% and 8% on average in the rest of the world. The market can be generally divided into electric chairs and manual hemodialysis chairs.

The Elkhart, IN, medical chair manufacturer Champion recently celebrated 25 years in the medical chair business. The company began by producing chairs for dialysis patient comfort, and its product line now includes other types of medical chairs.

Although the company’s focus is on US sales, Champion also sells chairs in Saudi Arabia, Singapore, India, Mexico, and Canada. Champion attracted investment from Levine Leichtman Capital Partners (LLCP), which noted in 2013 that “with its leading position in the dialysis center market and growing position in similar healthcare markets, the company is ideally positioned to benefit from the continued strong growth within these market segments. On May 9, 2017, LLCP sold Champion to an undisclosed buyer.