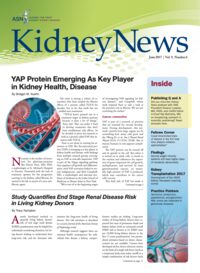 Anewly developed method to quantify living kidney donors’ risk of end stage renal disease (ESRD) postdonation may be helpful for individuals considering donation, for living donors wishing to understand their long-term risk, and for clinicians who monitor the long-term health of living donors. The risk calculator is described in a recent Journal of the American Society of Nephrology study.

Although research suggests there are minimal health consequences for individuals who donate a kidney, comprehensive studies are lacking. Long-term studies of living kidney donors have reported low rates of premature death and kidney failure (with an estimated overall ESRD risk to donors at 31 ESRD cases per 10,000 living kidney donors in the first 15 years postdonation), but personalized estimates based on donor characteristics are not available. Centers have developed ad hoc donor selection criteria on the basis of a single risk factor (such as a maximum body mass index cutoff) or a simple combination of risk factors (such as hypertension and age).

“There are over 120,000 living kidney donors in the United States, and more than 5000 donations every year. Both people who already donated and people considering donation want to understand their long-term risk of kidney failure,” said Dorry Segev, MD, PhD, of the Johns Hopkins University School of Medicine and the Johns Hopkins School of Public Health.

To provide insights, Segev and his team set out to construct a prediction model of ESRD after living kidney donation and to create an easy-to-use web-based risk calculator, where a user could provide characteristics of a potential donor and receive estimates of ESRD risk over time.

The investigators first studied information on 133,824 living kidney donors from 1987 to 2015, as reported to the Organ Procurement and Transplantation Network. The median age at donation was 40 years. Among these donors, 40.8% were men, 12.5% were black, and 59.4% had a first-degree biologic relationship to their recipient.

“We were able to produce a calculator that estimates donors’ risk based on age, race, gender, body mass index, and whether or not they have a first-degree biological relationship to their recipient,” said lead author Allan Massie, PhD, MHS. The findings suggest that greater permissiveness may be warranted in older black candidate donors, and that young black candidates should be evaluated carefully.

“Because living kidney donors voluntarily undergo surgery for no direct medical benefit to themselves, it is incumbent upon the transplant community to provide them with accurate estimates of long-term risk,” Segev said.

The authors noted that because ESRD is very rare in living kidney donors and takes many years to develop, they were unable to study other important potential risk factors like pre-donation kidney function, smoking, and blood pressure. Information on these risk factors was not collected in the early years of living donor registration.

Geir Mjøen, MD, who was not involved with the study but has published many articles on outcomes after kidney donation, stressed that additional long-term research is needed. “The study is important because it describes large differences in the risk of ESRD after donation; however, because of limited follow-up time, risks faced by younger donors could be under-communicated,” he said.

Mjøen, who conducts research at Oslo University Hospital in Norway, and his colleagues have noted that many analyses of donor risks have included control groups that are less healthy than the living donor population and have had relatively short follow-up periods. Also, it can be difficult to compare these analyses owing to variations in design.

One of Mjøen’s recent studies notes that living kidney donation has increased by approximately 50% globally but that there has been stagnation and even a decline in some countries, which may reflect ambiguity concerning the use of living donors. To safely increase living kidney donations, ensure proper informed consent, and provide guidance for follow-up care, it is imperative to provide accurate information concerning the long-term effects of donor nephrectomy, Mjøen said.