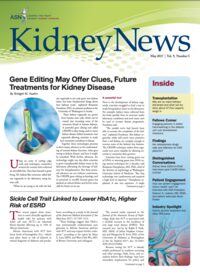 African Americans with SCT have lower levels of hemoglobin A1c—which may place them at risk of delayed or missed diagnosis of diabetes and prediabetes, according to a study in the Journal of the American Medical Association (J Am Med Assoc 2017; 317:507–515).

“These findings suggest that HbA1c may systematically underestimate past glycemia in African American patients with SCT and may require further evaluation,” according to the report by Mary E. Lacy, MPH, and Wen-Chih Wu, MD, of Brown University and colleagues.

The second study, reported in the Journal of the American Society of Nephrology, finds that SCT is associated with a twofold increase in the incidence of end stage renal disease (ESRD). That research was led by by Rakhi P. Naik, MD, MHS, of Johns Hopkins University and Marguerite R. Irvin, PhD, of the University of Alabama at Birmingham (J Am Soc Nephrol 2017; doi: 10.1681/ASN.2016101086).

Because testing for SCT is already widely performed in newborn screening and other settings, Naik, Irvin, and coauthors believe their findings “may have immediate implications for policy and treatment recommendations.”

Twofold increase in ESRD for African Americans with SCT

Naik and colleagues analyzed the association between SCT and ERSD in a sample of 9909 self-reported African Americans from the Reasons for Geographic and Racial Differences in Stroke (REGARDS) study. Sickle cell trait was present in 7.5% of the sample. Rates of other genetic variants associated with kidney disease were 12.8% for APOL1 high-risk genotypes and 2.5% for hemoglobin C trait.

There were some significant baseline differences among groups: SCT carriers had a lower estimated glomerular filtration rate and higher urine albumin-to-creatinine ratio. Chronic kidney disease (CKD) prevalence was 36.8% in the SCT group, compared to 25.9% for individuals with hemoglobin C, and 25.1% for those with neither trait.

“Our study demonstrates that SCT is not only a significant genetic risk factor for the development of ESRD in African Americans, but also that it confers a similar degree of risk for ESRD as APOL1 high-risk genotypes, which are currently the most widely recognized genetic variant associated with kidney disease in this population,” Naik and colleagues write.

The findings suggest “an additional genetic basis” for the higher rate of advanced kidney disease among African Americans. While the mechanism of kidney damage is yet unclear, some evidence points to vascular damage and hypoxia in the renal medulla—the same pathway leading to nephropathy in patients with full sickle cell disease.

Lacy, Wu, and colleagues analyzed data on 4620 African American participants from two community-based cohort studies: the CARDIA Study and the Jackson Heart Study. The participants, mean age 52.3 years, made up to three study visits including concurrent measures of fasting glucose and HbA1c.

These measures were analyzed for association with SCT, which was present in 7.9% of those studied. Participants with SCT were older, had lower kidney function, lower HbA1c, and a higher reported rate of diagnosed diabetes.

On analysis using generalized estimating equations, mean HbA1c was 5.72% in those with SCT, compared to 6.01% in the non-SCT group. The average difference of 0.30% was present across a range of fasting or 2-hour glucose levels.

The presence of SCT was associated with potentially missed cases of diabetes, defined as HbA1c of 6.5% or higher. Diabetes prevalence was 3.8% for participants with SCT versus 7.3% for those without. By comparison, rates of self-reported diabetes diagnosis were 17.2% and 14.7%, respectively.

“These findings suggest that HbA1c may systematically underestimate past glycemia in African American patients with SCT and may require further evaluation,” Lacy and coauthors write.

The authors discuss some ways in which SCT might affect the accuracy of HbA1c. Red blood cells may be shorter-lived in people with SCT, thus reducing the time available for hemoglobin glycation. It’s also possible that the presence of HbS might interfere with common HbA1c assays. (The authors note that their study used high-performance liquid chromatography techniques that have not shown clinically significant interference in those with HbA1c).

The most common hemoglobin variant in the US population, SCT is found in 8% to 10% of African Americans with SCT, compared to less than 1% of white Americans. The American Society of Hematology notes that SCT may be present in 1 to 3 million Americans, and in more than 100 million people worldwide.

The new studies suggest that the presence of SCT may signal some important clinical associations.

“These findings raise the possibility of benefit from incorporating information on hemoglobin variants into clinical guidelines for interpreting HbA1c values for screening and diagnosis of prediabetes and diabetes,” Lacy and colleagues write. They call for further studies to assess whether delays in recognizing prediabetes and diabetes could account for the reduced kidney function in African Americans with SCT.

In a previous study (J Am Med Assoc 2014; 312:2115–2125), Naik and colleagues found an increased risk of CKD, lower kidney function, and higher albuminuria in African Americans with SCT. The authors note that, in contrast to APOL1 genotype, testing for SCT is routinely performed in newborn screening, athletic examinations, and pregnancy counseling.