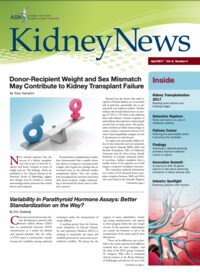 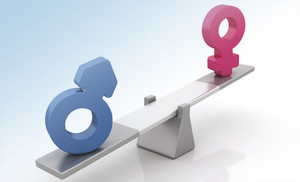 New research indicates that the success of a kidney transplant may rely in part on how the recipient and donor compare in terms of weight and sex. The findings, which are published in the Clinical Journal of the American Society of Nephrology, suggest that changes may be needed to current immunology-based protocols that match donors and recipients.

Several kidney transplantation studies have demonstrated that a smaller donor size relative to recipient is associated with a higher risk of graft loss, perhaps due to increased strain on the relatively smaller transplanted kidney. Very few studies have investigated the outcomes associated with donor-recipient weight mismatching as determined by body mass in isolation, however.

Research has also shown that male recipients of female kidneys are at increased risk of graft loss, presumably due to size mismatch and nephron number. (Studies indicate that female kidneys have an average of 12% to 17% fewer total nephrons than male kidneys.) Female recipients of male kidneys also experience reduced graft survival, but to a lesser extent. The mechanisms involved are likely immunologic in nature, owing to mismatch between H-Y minor histocompatibility antigens (on the Y chromosome in male donors).

To explore the potentially additive effect of size mismatch and sex mismatch, a team led by Amanda Miller, MD, and Karthik Tennankore, MD, of Dalhousie University and the Nova Scotia Health Authority, in Canada, examined whether receiving a kidney transplant from a smaller donor of the opposite sex would impact a recipient’s transplant outcomes.

The researchers analyzed information on a cohort of US deceased donor transplant recipients between 2000 and 2014 who were listed in the Scientific Registry of Transplants Recipients. The team excluded living donors, patients <18 years of age, those receiving multiple organs, en bloc or sequential transplants, and patients without a documented donor or recipient weight.

After accounting for other transplant variables, the investigators found that if a kidney transplant recipient was >30 kg (66 pounds) heavier than the donor, there was a 28% higher risk of transplant failure compared with equally weighted donors and recipients. If the kidney was from a smaller donor of the opposite sex, the relative risk of transplant failure was further elevated to 35% for a male receiving a kidney from a female donor and 50% for a female receiving a kidney from a male donor. This risk is similar to that observed when a recipient receives a kidney transplant from a donor who has diabetes, a known risk factor for kidney failure. It is also comparable to other risk factors for graft loss that historically influence organ allocation, including dialysis vintage >4 years and expanded vs. standard criteria donors.

“This study is extremely important because we have shown that when all else is considered, something as simple as the combination of a kidney donor’s weight and sex is associated with a marked increase in kidney transplant failure,” Miller said. “While more research is required before including these variables in a recipient matching strategy, this study highlights the importance of donor and recipient matching above and beyond current immunology-based protocols.” It will be important to determine the extent to which any benefit derived from weight and sex matching would offset the potential risk of longer times on the transplant wait list for individual candidates.

Jane Tan, MD, PhD, a transplant nephrologist at Stanford University Medical Center who was not involved with the study, noted that the results lend support to previous research as well as provide insights that will be useful when looking toward the future.

“These findings build upon prior studies that demonstrate the long-term risks of low nephron dose for metabolic demand in kidney transplantation, as well as the potential impact of non–human leukocyte antigen immune responses to allograft survival,” she said. “With a continued increase in obesity among kidney transplant candidates, donor-recipient weight mismatch may factor into clinical decision-making, especially among recipients with increased metabolic demand.”

In an accompanying editorial, Bethany Foster, MD, MSCE. and Indra Gupta, MD, of McGill University, stressed that while matching for sex and body size in organ allocation algorithms deserves consideration, this idea must be approached with a great deal of caution. It would require complex matching, and special care would have to be taken to avoid disadvantaging larger recipients. “Restricting transplant options by prioritizing sex matching may also lead to longer waiting times,” they wrote. “Females with a large body size would be particularly disadvantaged by an approach that favoured allocation of sex- and body-size matched kidneys.”

Article: “Donor-Recipient Absolute Weight and Sex Mismatch and the Risk of Graft Loss in Renal Transplantation.”