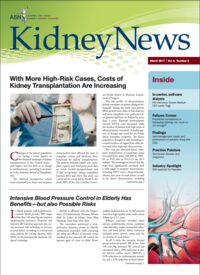 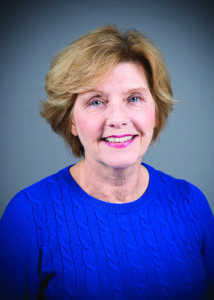 I’m curious, when did you decide to become a nephrologist?

It wasn’t until my third year of residency. Actually, I was interviewing for positions in internal medicine private practice in Houston, which is where I trained, at Baylor College of Medicine. I had one month during which I was rounding on the general medicine service at our county hospital. My attending was the chief of the renal division, Wadi Suki. It was one of those months that it seemed every other patient was a kidney patient. We had cases of malignant hypertension, flagrant lupus nephritis, a patient with membranous glomerulopathy who ended up with a renal vein thrombosis—some very unusual types of cases. At the end of the rotation, Dr. Suki turned to me and said, “You seem to like nephrology. Do you want to be a renal fellow?”

I thought about it for maybe five minutes, and then said, “Sure.” I really had never considered it before, but I haven’t regretted it for a moment since. For the record, that was 1981, clearly another downtime, I guess you would call it, for interest in nephrology, because if I had not agreed to become a renal fellow that year, they would have had only one first-year renal fellow for a huge program that covered three giant hospitals. So that was a time when nephrology was not that attractive to residents. I believe it’s cyclical.

Mentorship and role modeling are really important. What did you learn from Dr. Suki?

First of all, he was known as a researcher in divalent ion metabolism. But his approach to patients was what really grabbed me. He could take basic renal physiology and apply it to the patient in front of him. He also had a way of being able to look at the whole patient, but then to dissect out the problems on a one-by-one basis and tackle each of them. He was not the only one who did this—several other members of the renal division could do the same thing, and I found that amazing. I really liked the fact that the approach to the patient was thoughtful and logical, that you looked at the whole patient and not just a single organ. But then you were also able to understand, at a basic physiological level, what was going on for a particular nephrology issue. And I told myself, that’s the way I wanted to be. I wanted to be able to do the same thing.

And you have done that. I know you have a big clinical load, so you see a lot of patients, but you also run a basic science lab. What is similar and what has changed between, say, where Dr. Suki was in the early ’80s and where you are now near the end of the 2010s.

Grant funding is a lot harder to get now, and actually, there is quite a bit that has changed. Interestingly, the academic setup at Baylor was quite similar to what it is at the University of Louisville: a medical school that is affiliated with a number of different hospitals, both public and private, with the same sorts of tensions that exist when you have an administration of a private hospital, perhaps having a different agenda or different priorities than a medical school.

But yes, research funding was a lot easier to come by during the ’80s. I won’t say that everybody always had a grant, but Dr. Suki had research grants for a considerable amount of the time I was there. I’m not sure exactly what the funding level was, but I’ve heard quotes that it was in the 30th percentile, and that, of course, is considerably different from what it is now.

The types of patients we were seeing were actually extraordinarily similar to those we see now, so I don’t think that has changed very much. What has changed is where these patients are taken care of. When I was in training, you could admit someone with practically anything to the hospital. If a person had a bad headache, you could get them admitted. When we saw somebody who had proteinuria as an outpatient, we could admit them for their entire proteinuria workup, including the biopsy, wait until the results of the biopsy came back, and start them on therapy. That doesn’t happen now.

One of the advantages for a trainee in having that opportunity was that you were able to see very easily, unfolding right in front of you, how you do a workup on a certain clinical problem all the way to the very end to treatment. I think this is more challenging now, because you don’t want to admit a patient for an entire workup. Most of the workup is done in the outpatient setting. The patient may or may not even be admitted for the biopsy. Then they come back to clinic where the decision on treatment is being made. So it may be a little harder now for trainees to get the total evolution of an evaluation of a patient.

From your perspective, what are some of the most exciting areas of research into kidney diseases?

There are a lot of exciting areas of research. I guess the first one that pops into my mind is the discovery of the variations in the APOL1 gene and the propensity for the development of kidney disease in African Americans. To me, this discovery started to provide an answer to a question that so many of us had asked for many years: Why was it, when you looked at the dialysis population, that African Americans were disproportionately represented? Some very nice studies done early on suggested that even when you held many other factors constant, such as blood pressure control, diet, where they lived, profession, and socioeconomic status, that still, African Americans progressed to end stage kidney disease more often than Caucasians did. The discovery that the variations in this gene can confer some propensity toward the development of kidney failure, I think, from a public health standpoint, is just phenomenal.

The next step is to figure out what exactly happens. What is the mechanism by which changes in this one protein can have such a profound effect on kidney health, and what can we do about it? Is this a gene therapy thing or would this be amenable to more conventional pharmacologic therapies? The APOL1 finding, to me, stands out as number one.

Another exciting shift in the way that we think about kidney diseases is exemplified by the discovery that the antigen that produces, or antibodies against the antigen that produces, membranous glomerulonephritis is PLAR2. This finding got everyone to start thinking more about the glomerular diseases apart from their simple pathology. The pathology has done well for the years that we’ve used it. You look at the pathology and see a pattern (the name of the disease is actually based on the pattern seen on pathology), but all of us knew that’s what we were doing. We were looking at the picture, describing the picture, and calling it the disease.

Discovering what appears to be a causative protein has allowed us to start thinking in terms of pathophysiology, not simple pathology. We see this extending from the discovery in membranous glomerulopathy to the complement-associated kidney diseases, and, now, to what is in essence, an entire reorganization and reclassification of what we used to call membrano-proliferative glomerulonephritis, which is now being subclassified into a more mechanistic type of organization as opposed to a simple picture. This is the same thing we see with IgA nephropathy, and the next big one that’s going to fall is focal segmental glomerulosclerosis. We already know from studies, some of them from the University of Louisville and other places, that there are differences in the composition of the matrix tissue deposited in focal segmental glomerulosclerosis in the different types, and this again, points toward the fact that we have lumped a bunch of things together based on what the pathology picture looked like. Now we are going to be able to completely reclassify these illnesses, which then points toward much more individualized therapies for them. This is another big shift in the way nephrology is happening.

I think there are two other areas. First, “How does acute kidney injury (AKI) result in chronic kidney disease?” This is something new and exciting. I can tell you that when I was in training, the teaching was that you get AKI and you’re going to get better from it. We now know that, sure, you’ll be able to come off dialysis if you required it for the AKI, but there are some subtle changes that occur, and these subtle changes, over time, can lead to the development of chronic kidney disease.

As a sequel to that question, another exciting area of research is understanding the mechanisms by which chronic kidney disease leads to myriad systemic effects. Over the past 10 years, we had the discovery of FGF-23 and what it does to produce left ventricular hypertrophy. We had the discovery of the inhibitors of WNT signaling that contribute to bone disease and the loss of Klotho . . . who knew in a million years that there was a protein produced and expressed in the kidney that would have such myriad systemic effects? And yet it’s interesting that even when I was in fellowship training from 1981 to 1984, my mentors and others were describing chronic kidney disease as accelerated aging. And we now know from the discovery of Klotho, that in fact in many ways, they were absolutely correct because chronic kidney disease results in the loss of Klotho, and the loss of Klotho is one of the major contributors toward aging. This, to me, is very exciting.

The last piece of exciting research I would like to touch on is that, in 1984, if someone had told me dietary potassium regulates the expression of the sodium chloride co-transporter, I would have told them they were crazy. And yet we now see discoveries of entirely new signaling systems that have allowed us to understand sodium and potassium handling in the kidney so much better—just when many people thought, “Oh, this is done. We’ve done sodium–potassium, we know how this works.”

I think there is a tremendous amount of new knowledge in nephrology. I think there are many exciting things right on the edge of happening, and the discoveries that I’ve talked about are the first steps leading to very exciting and innovative therapies for these illnesses. I think that in the next 10 years we will see a phenomenal explosion of new therapies for kidney diseases. 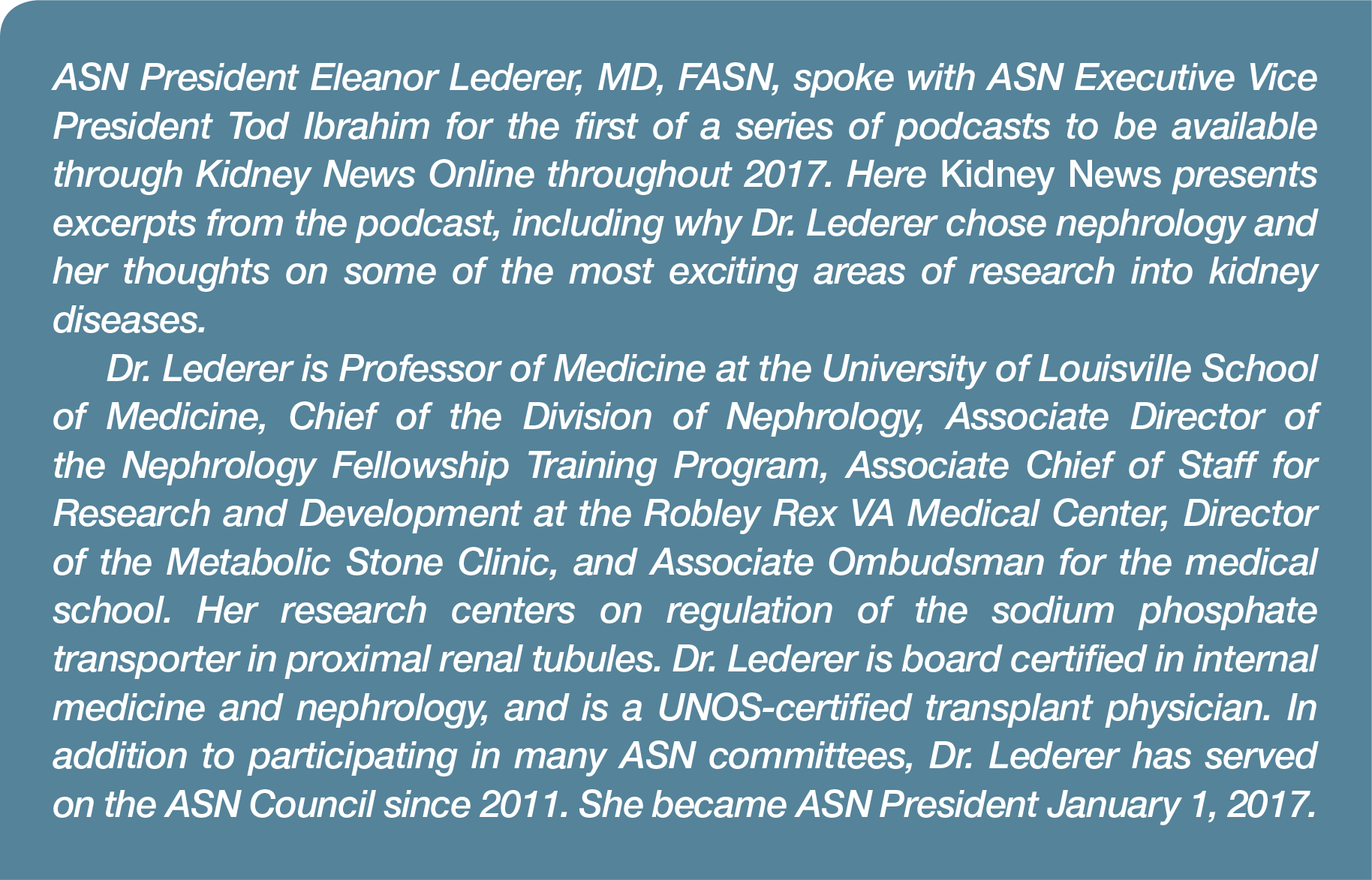