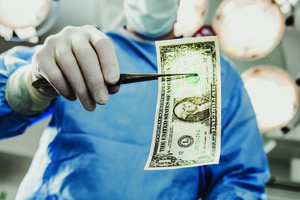 With More High-Risk Cases, Costs of Kidney Transplantation Are Increasing

Changes in the patient population are having a major impact on the financial landscape of kidney transplantation in the United States—with higher costs but little or no change in reimbursement, according to an analysis in the American Journal of Transplantation.

The national retrospective cohort study examined how donor and recipient characteristics have affected the costs to transplant centers and Medicare reimbursement for kidney transplantation. The analysis included linked cost, transplant registry, and third-party payer data on nearly 54,000 deceased-donor and 37,000 living-donor kidney transplants between 2002 and 2013. The study was conducted by a team led by David A. Axelrod, MD, of the East Carolina University Brody School of Medicine Department of Surgery.

The risk profile of deceased-donor kidney transplant recipients changed dramatically during the study time period. More patients were older or had diabetes, and more transplants were performed after patients had been on dialysis for more than 5 years. Expected posttransplant survival (EPTS) score decreased, while the number of patients with high levels of allosensitization increased. A similar pattern of changes was noted for the living-donor transplant recipients. The donor population changed as well, including increased numbers of organs from older donors and other high-risk characteristics.

The cost per deceased-donor transplant (independent of acquisition costs) increased from about $98,000 in 2002–03 to $107,000 in 2012–13 (in 2013 dollars). The investigators found that the costs were significantly correlated with a wide range of recipient characteristics, including EPTS score, allosensitization, obesity, and cause of renal failure; as well as by donor characteristics, including age, cause of death, donation after cardiac death, and terminal creatinine level; and by histocompatibility matching.

For living-donor transplants, costs increased from about $87,000 to $95,000 during the timeframe studied. Transplants with greater allosensitization were associated with higher costs for these patients. Other contributors to higher cost included obesity, cause of renal failure, the recipient’s work status, and 0-ABDR mismatching.

“The study by Axelrod et al. addresses a very important issue of the increasing costs of kidney transplantation,” said Uday Nori, MD, of the Ohio State University Wexner Medical Center. “Ever since the new UNOS conditions-of-participation for transplant centers were enforced in 2007, transplant professionals faced a great dilemma: Do we continue to provide high-risk patients access to transplantation or become risk-averse by transplanting only low-risk individuals? Ten years later the answer is still not clear.”

Indeed, kidney transplantation has become increasingly complex—the result of changing demographic patterns, a shortage of high-quality organs, and increased use of treatments to address allosensitization. Transplantation improves outcomes and reduces costs, even for high-risk patients. However, these savings are only realized over time, whereas the initial costs are borne by the transplant center.

The increased cost analysis did not take into account two areas that are difficult to study, Nori said.

“In order to be compliant with the new conditions-of-participation that were enforced by CMS in 2007, most transplant centers increased their staffing in the areas of data collection, quality improvement, patient care, and administration. Professionals such as pharmacists, dieticians, social workers, and psychologists are now an integral part of the multi-disciplinary teams, which is a new paradigm in the care of transplant recipients. Among physicians, transplant trained subspecialists from nephrology, infectious diseases, endocrinology, etc., routinely provide care to these patients,” Nori said. “The costs of hiring and maintaining such large highly specialized care teams is very high and adds to the bottom line for expenses for each transplant center. Although widely acknowledged, this data is not rigorously analyzed or published.

“The second area is the increasingly popular ‘paired donor exchange’ programs. With declining living donor transplants across the country, this method has gained widespread notice since 2009 or so,” Nori continued. “The logistics and staffing to maintain such programs require substantial costs to the transplant centers and most likely result in net loss over time. The only major incentive for programs to do these transplants is to provide a life-saving service to an otherwise disadvantaged population and to avoid having to utilize deceased donor kidneys for these patients.”

Even given these limitations, the study provides nationwide, risk-adjusted data on the association between transplant center costs and donor and recipient characteristics. The results show that costs have risen substantially along with increased numbers of nonstandard donor organs and high-risk recipients.

These changes in clinical characteristics have “eroded profitability” of kidney transplantation in the United States, the researchers said. “Policy makers should consider the creation of risk-adjusted payment for renal transplant, similar to that of liver and heart transplant, to ensure that access is reserved for expensive but deserving candidates,” they wrote.