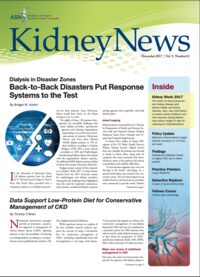 Starting dialysis with a fistula has been shown to improve patient outcomes, but the challenge of getting a surgically created fistula in time to start dialysis is often hard to overcome. But trial results presented at Kidney Week suggest a minimally invasive technique for creating a fistula may one day allow interventional nephrologists to quickly and safely create fistulas.

The study was one of several late-breaking studies presented at the meeting that suggested innovative techniques, trial designs, and treatments might yield better results for patients with kidney disease and those at risk. Among them were a pragmatic trial examining the benefits of longer dialysis sessions in a real-world setting and studies aiming to reduce the kidney risks faced by patients undergoing cardiac procedures. Other trial results assessed the efficacy and safety of drugs tolvaptan, bardoxolone, and rituximab in select groups of patients with kidney disease.

The pivotal trial of an ultrasound-guided technique for creating an anastomosis between the proximal radial artery and perforating vein in an outpatient setting achieved its targets, according to Jeffrey Hull, MD, an interventional nephrologist at the Richmond Vascular Center and assistant clinical professor at Virginia Commonwealth University.

Instead of surgically creating such an access, in the trial the Ellipsys® Vascular Access System was used by interventional nephrologists to create fistulas for 107 patients at 5 outpatient vascular centers. The minimally invasive procedure takes on average 23 minutes, said Hull.

In the prospective trial, arteriovenous fistula with fused anastomoses were created for 95% (102) of the trial participants. The trial’s goal of achieving primary flow and diameter endpoints for 49% of the patients was exceeded. In fact, 86% of the participants achieved brachial artery flow volume greater than or equal to 500 mL/min and a vein diameter of at least 4 mm.

“We created high-quality fistulas in the office setting,” said Hull. “This was done by interventionists who had never done it before.”

He said the company making the device hopes to achieve US Food and Drug Administration approval this year.

Kidney Week meeting attendee and KN Editor-in-Chief Richard Lafayette, MD, a nephrologist at the Stanford University Medical Center, called the study “a great advance toward moving the procedure into the hands of nephrologists.”

Janice Lea, MD, MSc, professor of medicine and director of Emory Dialysis at Emory University in Atlanta, said she thought this study was the most “impactful” of the late-breaking trials.

“It could directly improve dialysis care by giving patients better vascular access without a lot of surgery,” Lea said. She said she could definitely see it being very useful for patients who are new to dialysis, but she would like more data on whether it will benefit patients who’ve had multiple vascular access procedures, who have poor circulation, or other complicating factors.

Longer dialysis sessions may lower the risk of early death among dialysis patients, suggest data from observational studies. To verify if this is true, Laura Dember, MD, of the University of Pennsylvania, and colleagues conducted a pragmatic trial comparing 4 hour and 15 minute dialysis with standard 4-hour sessions in 260 dialysis units operated by Fresenius and DaVita, the two largest dialysis providers in the United States.

“They are also called real-world trials because they are conducted under the circumstances the intervention will ultimately be applied rather than idealized experimental conditions,” Dember said.

She explained that the interventions were carried out by the dialysis center staff and applied to 7035 incoming dialysis patients. The data used for the study analysis were all clinical data routinely collected during care. The trial was part of the National Institutes of Health Research Systems Collaborative that aims to advance the use of such pragmatic trials in the hopes of more efficiently producing results that will be generalizable in real-world clinical settings.

“There was significant amount of resistance on the part of the patients [to longer dialysis duration],” explained Dember.

Despite not being able to answer whether longer dialysis improved outcomes, the trial did demonstrate that dialysis may be a promising setting for pragmatic clinical trials. The trial also offered valuable lessons that may aid future studies.

“We need to develop more effective approaches for engaging on the ground clinicians and patients if we are going to conduct large scale trials that are embedded in clinical care delivery,” she said.

Two other late-breaking studies demonstrated potential strategies to protect the kidneys from harm during heart procedures.

The contrast agents used to enhance imaging studies of individuals with suspected coronary artery disease may harm the kidneys, explained radiologist Marc Dewey, MD, of the Institute for Radiology at Charité Hospital in Berlin, Germany. Each year, 70 million such studies are conducted with intravenous contrast agents and 7 million are done with intracoronary agents in the United States and United Kingdom, he said. But there are limited data to guide clinicians to the least harmful choices.

During the study, patients with suspect coronary disease were randomly assigned to undergo ICA (162) or CTA (165). The groups had comparable glomerular filtration rates prior to the procedures. After the procedures, 9 patients in the CTA group (6%, 95% CI 3-10%) and 21 patients in the ICA group (13%, 95% CI 8-19%) experienced a contrast-induced acute kidney injury.

“It’s encouraging that there are ways to potentially reduce the risk of kidney injury [in heart patients],” said Lea.

The trial tested QPI, a small interfering RNA (siRNA) that reduces the expression of the p53 gene. The p53 gene promotes cell death, so according to the drug’s manufacture Quark, the drug might prevent the death of normal kidney cells caused by acute kidney injury. The drug is also being studied to prevent ischemia-reperfusion injury in patients undergoing kidney transplant.

In the study, 341 patients undergoing nonemergency cardiac surgery at 41 sites were randomized to receive a single intravenous dose of QPI 4 hours after surgery or a placebo. Participants had at least one risk factor for acute kidney injury. Patients who received QPI had a 26% reduction in the relative risk of acute kidney injury compared with placebo (37% vs. 50%; p=0.02). The severity and duration of kidney injury was also reduced in the treated patients, Corteville said. Adverse events were comparable between the two groups. A phase 3 trial is planned to confirm the results.

In high risk patients with multiple risk factors for acute kidney injury the trial also showed a significant reduction (29%) in a composite endpoint of death, dialysis, or a 25% reduction in eGFR, said Shai Erlich, PhD, Chief Medical Officer of Quark Pharmaceuticals during a press briefing at Kidney Week.

Erlich explained that while the investigators hoped to see a trend in this direction, they did not expect that such a trend would be significant because the study wasn’t designed to be large enough to detect such a difference.

“This exceeded our expectation that we would only see a trend,” Erlich said.

A phase 3 trial is planned; if that trial is successful and the drug is approved for use in the US it is likely to be indicated only for those at high risk, Erlich said.

More research is needed to determine if the benefits outweigh the costs of the treatment, cautioned Lea. She noted that similar kidney injury–reducing drugs have proved not to be cost-effective. Additionally, she would like to see studies comparing QPI to conventional kidney sparing techniques, like administering IV fluids prior to surgery.

“I don’t think it will be ready for primetime anytime soon,” she said.

Other studies presented focused on the safety and efficacy of drug treatments: