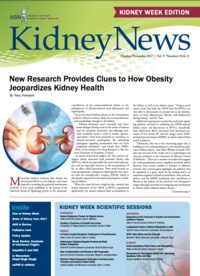 Higher serum soluble urokinase receptor (suPAR) levels are associated with a higher risk of CKD progression in children, according to a study in JAMA Pediatrics.

The findings are the latest to suggest suPAR may be a useful biomarker for predicting onset or progression of kidney disease. A 2015 study in the New England Journal of Medicine showed that elevated levels of suPAR are linked with the incidence of CKD and faster decline of renal function in adult patients (Hayek SS, et al. N Engl J Med 2015; 373:1916–1925).

Not having good early biomarkers can hamper treatment for kidney disease.

“Time after time, research has shown that treatments need to be given early in the course of the disease to be the most effective,” said Michael Bennett, PhD, assistant professor of pediatrics and director of the Biomarker Laboratory at Cinncinati Children’s Hospital Medical Center. “Finding earlier markers of kidney disease and its progression can allow physicians to make better informed decisions as to the course of treatment for the patients. Earlier implementation of those treatments may lead to better outcomes.”

Nephrologists rely on biomarkers like creatinine, estimated glomerular filtration rate (eGFR), and protein in urine to identify adults and children with kidney disease. But these markers don’t do well at predicting which individuals will progress from normal kidney function to CKD or have a faster decline during kidney disease, said pediatric nephrologist Howard Trachtman, MD, professor of pediatrics at NYU Langone Medical Center, co-author of both studies.

Especially challenging is predicting kidney disease in children whose kidney dysfunction may stem from congenital disorders or diverse etiologies, Trachtman said. Two-thirds of children in the study had congenital malformations of the renal or urogenital tract, noted co-author Jochen Reiser, professor and chair of the Department of Internal Medicine at Rush University Medical Center in Chicago. Kidney disease in adults is most often caused by diabetes, hypertension, and polycystic kidney disease, Reiser noted.

Trachtman, Reiser, and colleagues performed a post-hoc analysis of two European prospective follow-up studies of pediatric CKD: 642 children from the 4C Study and 256 from the ESCAPE trial. About 70% of children had congenital anomalies of the kidneys and urinary tract; other diagnoses included tubulointerstitial nephropathies, glomerulopathies, and postischemic CKD. More than 60% were male; mean baseline age was 11.9 years and mean eGFR 36 mL/min/1.73 m2.

Associations between baseline suPAR and eGFR during up to 8 years of follow-up were analyzed. Disease progression was defined as 50% loss of eGFR lasting for at least 1 month, start of renal replacement therapy, and/or eGFR < 10 mL/min/1.73 m2.

High suPAR levels were associated with worse outcomes. Rates of endpoint-free renal survival at 5 years were 64.5% for children in the lowest quartile of baseline suPAR compared to 35.9% for those in the highest quartile. Independent risk factors for the primary endpoint were diagnosis of glomerulopathy, older age, higher blood pressure, proteinuria, and lower eGFR. Among 269 children with a baseline eGFR > 40 mL/min/1.73 m2, higher suPAR levels were associated with a fivefold increase in risk of CKD progression: adjusted hazard ratio 5.12.

“We were very surprised to see the prediction [of kidney disease progression] was as strong as in adults or stronger,” Reiser said.

Despite the study’s promising findings, Bennett noted a few limitations: suPAR was measured at one time point so the study can’t track changes over time, and study participants had established kidney disease by traditional measures, so “it is not clear whether suPAR will be useful early in the clinical course with milder disease.”

“While any additional early information that can be found to help diagnose or track progression earlier in patients is likely to lead to improved outcomes down the road, more investigation needs to be completed before this finds its way into the daily practice of nephrologists,” Bennett said.

“It can take a decade or more for new biomarkers to go through enough studies to be trusted in making decisions clinically,” Bennett said. “Even then single markers are not typically useful on their own to make clinical decisions; they usually need to be combined with other markers, whether traditional markers like eGFR, or other novel biomarkers, to provide the most complete clinical picture.”

In the meantime, the study provides some valuable insights into the relationship between suPAR and kidney disease. For example, while much study of suPAR has focused on its role in focal segmental glomerulosclerosis (FSGS), it appears to be involved in other forms of kidney disease as well.

Also, researchers studying the molecular mechanisms of kidney disease may want to take a closer look at suPAR’s role and how it interacts with other molecules known to contribute to kidney disease and whether it might be a potential target for therapies.

“It’s really a novel concept that there is something outside the kidney in the blood, probably coming from the bone marrow, dominating de novo but also existing kidney disease,” Reiser said.

The researchers would like to do another study in which they follow children born with congenital malformations but otherwise functioning kidneys to determine if suPAR might predict progression in this subpopulation.

Preclinical studies are also underway to better understand how suPAR might be linked with kidney decline. Already, researchers have found that suPAR binds to integrins and podocytes, but other mechanisms may be involved, Reiser said. Trachtman said he hoped this work would ultimately lay the groundwork for clinical trials of interventions based on the underlying biology.