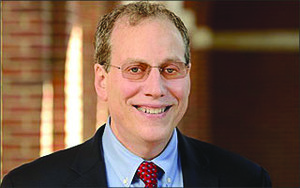 Andrew P. Feinberg, MD, MPH, will deliver a state-of-the-art lecture entitled “Epigenetics at the Crossroad of Genetics and Environment Leading to Disease” on Saturday, Nov. 4.

Dr. Feinberg is director of the Center for Epigenetics at the Johns Hopkins University. He also holds an adjunct professorship at the Karolinska Institute in Sweden and is a presidential scholar at Harvard’s Dana Farber Cancer Institute.

Dr. Feinberg made the first discoveries of altered DNA methylation in human cancer. He discovered human imprinted genes and loss of imprinting in cancer, and proved the epigenetic hypothesis of cancer through his work on Beckwith-Wiedemann syndrome. He also identified the first common genetic or epigenetic variant for cancer risk—loss of imprinting of insulin-like growth factor 2 in colorectal cancer. His discovery of epigenetically altered progenitor cells led to a paradigm shift in our understanding of carcinogenesis.

Recently, he pioneered genome-scale epigenetics with the first epigenome center funded by the National Institutes of Health (NIH). The center has pioneered methods such as the first comprehensive genome-scale methylation, which led it to identify the major target for epigenetic variation in humans. Dr. Feinberg led the first whole genome bisulfite sequencing analysis of human cancer.

He received the NIH Pioneer Award for his idea in 2009 that genetic variants, in evolution or in cancer, could lead to increased epigenetic plasticity, enhancing survival in a changing environment. His studies of metastasis driven by stochastic epigenetic change rather than metastasis-specific mutations provided evidence for this idea.

His honors include a MERIT Award from the National Cancer Institute, election to the National Academy of Medicine, and the Feodor Lynen Medal from the German Society for Biochemistry and Molecular Biology. The Institute for Scientific Information ranks him among the most cited authors.

Dr. Feinberg received his MD and MPH from Johns Hopkins University. As a postdoctoral fellow at the University of California, San Diego, he identified epigenetic memory of cell fate in Dictyostelium. He received clinical training in medicine at the University of Pennsylvania and in medical genetics at Johns Hopkins. As a fellow there from 1983 to 1986, he developed the random priming method, which is ranked in the top 100 papers of all time in citations. He was a Howard Hughes investigator at the University of Michigan from 1986 to 1994, and returned to Johns Hopkins as the King Fahd Professor of Medicine, Molecular Biology, and Genetics.