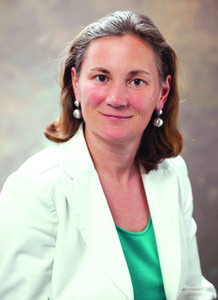 Human-Engineered Tissues for Dialysis Access” is the title of a state-of-the-art lecture to be given on Thursday, Nov. 2.

The speaker will be Laura E. Niklason, MD, PhD, the Nicholas M. Greene Professor in Anesthesia and Biomedical Engineering at Yale University, where she has been on the faculty since 2006.

Dr. Niklason’s research focuses primarily on regenerative strategies for cardiovascular and lung tissues, but the first use of the new technology is likely to be grafts for use in hemodialysis. Dr. Niklason’s engineered blood vessels are currently in clinical trials, and are the first engineered tissues to be studied in a phase III trial. The approach does not require any cells from the patient; the engineered tissue is available “off-the-shelf.”

Studies in vascular tissue mechanics showed several decades ago that most of the mechanical properties of arteries are derived not from the cellular components, but from the collagen- and elastin-based extracellular matrix. Using this principle, Dr. Niklason’s research team utilized banked human vascular smooth muscle cells to engineer implantable arteries. In this process, they seed allogeneic vascular cells onto a degradable substrate to culture vascular tissues in a biomimetic bioreactor. After eight to 10 weeks, the engineered tissues are decellularized to produce an engineered extracellular matrix–based graft.

The advantage of using allogeneic cells for graft production is that no biopsy needs to be harvested from the patient, and no patient-specific culture time is required. The acellular grafts can be stored for six months and are available when patients need them.

These grafts have been tested most extensively for hemodialysis access in patients who are not candidates for autogenous arteriovenous fistula creation. The first patient was implanted in December 2012 in Poland. Since then, 60 patients have been implanted with engineered grafts for dialysis access, 40 patients in Europe and 20 in the US.

The grafts can be used for dialysis access as soon as four to eight weeks after implantation. This early experience has been very positive, indicating a potential future for this novel graft in providing vascular access for hemodialysis.

Dr. Niklason’s lab was one of the first to describe the engineering of whole lung tissue that could exchange gas in vivo. This work was cited in 2010 as one of the top 50 most important inventions of the year by Time magazine. Dr. Niklason was inducted into the National Academy of Inventors in 2014 and elected to the National Academy of Medicine in 2015.