One disease or many?

IgA nephropathy (IgAN) is well identified by dominant IgA glomerular deposits; however, this immunohistologic entity can be an asymptomatic chance finding or present with an extremely variable course. The variable clinical and histologic expressions are likely to be the result of genetic and environmental factors modulating common pathogenetic and progression mechanisms.

Who gets IgAN, and what do we know about the origins?

There is genetic heterogeneity, and no causal mutation has been detected. IgAN has genetically complex traits, and genome-wide association studies have identified susceptibility variants that are responsible for 6% to 8% of disease risk (1). Genome-wide association studies have indicated the involvement of pathways, including antigen presentation, complement activation, regulation of IgA mucosal synthesis, and innate immunity. These findings suggest a role for mucosal infections and intestinal immunity. The pathogenesis of IgAN is thought to develop on the basis of a genetic predisposition, only partially known, via multiple hits (2). The first hit is an abnormal production of galactose-deficient IgA1, which needs a second hit, represented by the production of autoantibodies directed against galactose-deficient IgA1, followed by the third hit, the formation of immune complexes in circulation. The deposition of complexes in circulation in the mesangium activates complement and other mediators, leading to inflammation and finally ending in fibrosis, which is the fourth hit.

How do patients present?

The clinical presentation can be apparently benign, with isolated microscopic hematuria or bouts of gross hematuria coincident with mucosal infections. The patients presenting these features are often young, with normal GFR and normal blood pressure (BP), and spontaneous remission can occur, particularly in children. On the contrary, in several patients, years after unnoticed microscopic hematuria, proteinuria develops, mostly around 1 to 2 g/d. These patients often present with hypertension and mildly reduced GFR. The diagnosis of IgAN can be missed if a renal biopsy is not performed, and some patients enter dialysis and transplantation programs without the recognition of the causal renal disease.

Who is likely to have progressive disease?

The detection, at renal biopsy, of proteinuria, hypertension, and reduced GFR is associated with potential progression (Table 1). However, the most significant risk factor for progression of IgAN is persistent (time-averaged) proteinuria (>1 g/d) and persistent hypertension. Also, mild time-averaged proteinuria (>0.5 to <0.9 g/d) has been associated with progression, indicating the need for renal biopsy and diagnosis of IgAN before the development of heavy proteinuria (3). Time-averaged proteinuria and mean BP over 2 years are predictive of outcome, but clinical decisions are usually taken at biopsy. The added value for individual prognostication of histologic features has been proven by the Oxford Classification of IgAN (4), indicating that the mesangial (M) or endocapillary hypercellularity, segmental glomerulosclerosis, and tubular atrophy/interstitial fibrosis lesions predicted renal outcome independent of clinical data at renal biopsy and during follow-up. Addition of M or endocapillary hypercellularity, segmental glomerulosclerosis, and tubular atrophy/interstitial fibrosis lesions to baseline GFR, proteinuria, and mean BP improved prediction of patient risk, with accuracy comparable with the 2-year follow-up data (5). Patients with M1 are at risk, even if proteinuria at biopsy is <1 g/d, whereas those with M0 and tubular atrophy/interstitial fibrosis lesions 0 have low risk, even if proteinuria is 1 to 1.5 g/d (Table 1). 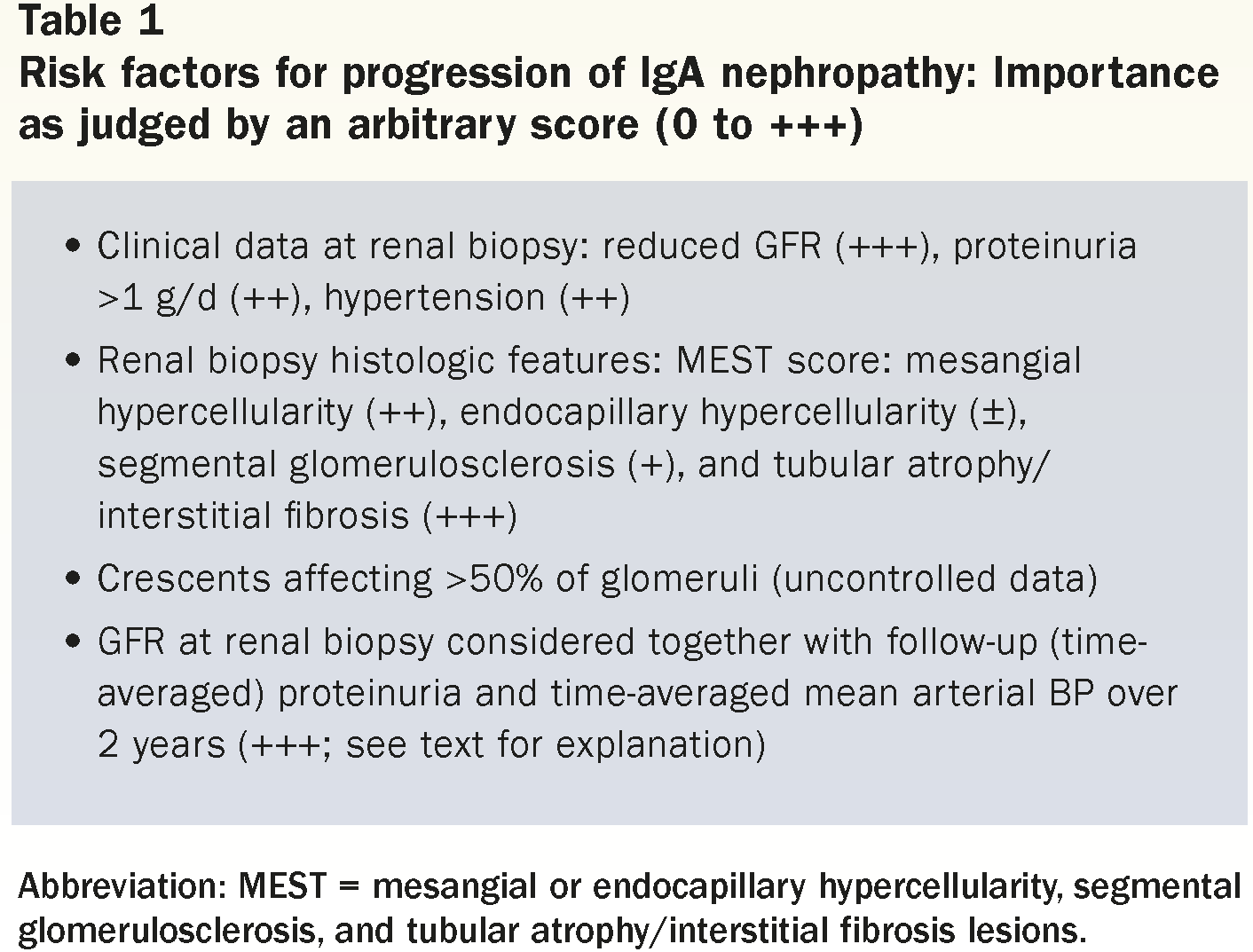 Supportive therapy: One for all and what does it include?

Given the usually long course of disease until renal failure develops, nonspecific measures that retard progression are key in the treatment of IgAN patients at risk for progressive loss of renal function. In sum, such measures are referred to as supportive therapy. Key components are the administration of renin-angiotensin system (RAS) blockers (i.e., ACE inhibitors or angiotensin receptor blockers uptitrated to achieve both sitting BPs in the 120s as well as a proteinuria below 1 g/d) (6). Both targets seem of equal importance. Nondihydropyridine calcium antagonists should not be used as first-line agents given their induction of glomerular hypertension. Other important measures are lifestyle changes (in particular, the initiation of a moderate protein diet; 0.8 g protein per 1 kg body wt per day, particularly if GFR is below 60 mL/min), salt restriction, nicotine abstinence, and treating all components of the metabolic syndrome (Table 2). In patients with proteinuria that was initially controlled by these measures but subsequently started to increase again, aldosterone breakthrough may have occurred. In such patients, a low dose of an aldosterone antagonist (e.g., spironolactone at 25 mg/d) may effectively reduce proteinuria again; if this approach is used, hyperkalemia is a risk, necessitating frequent monitoring and/or the addition of a loop diuretic. 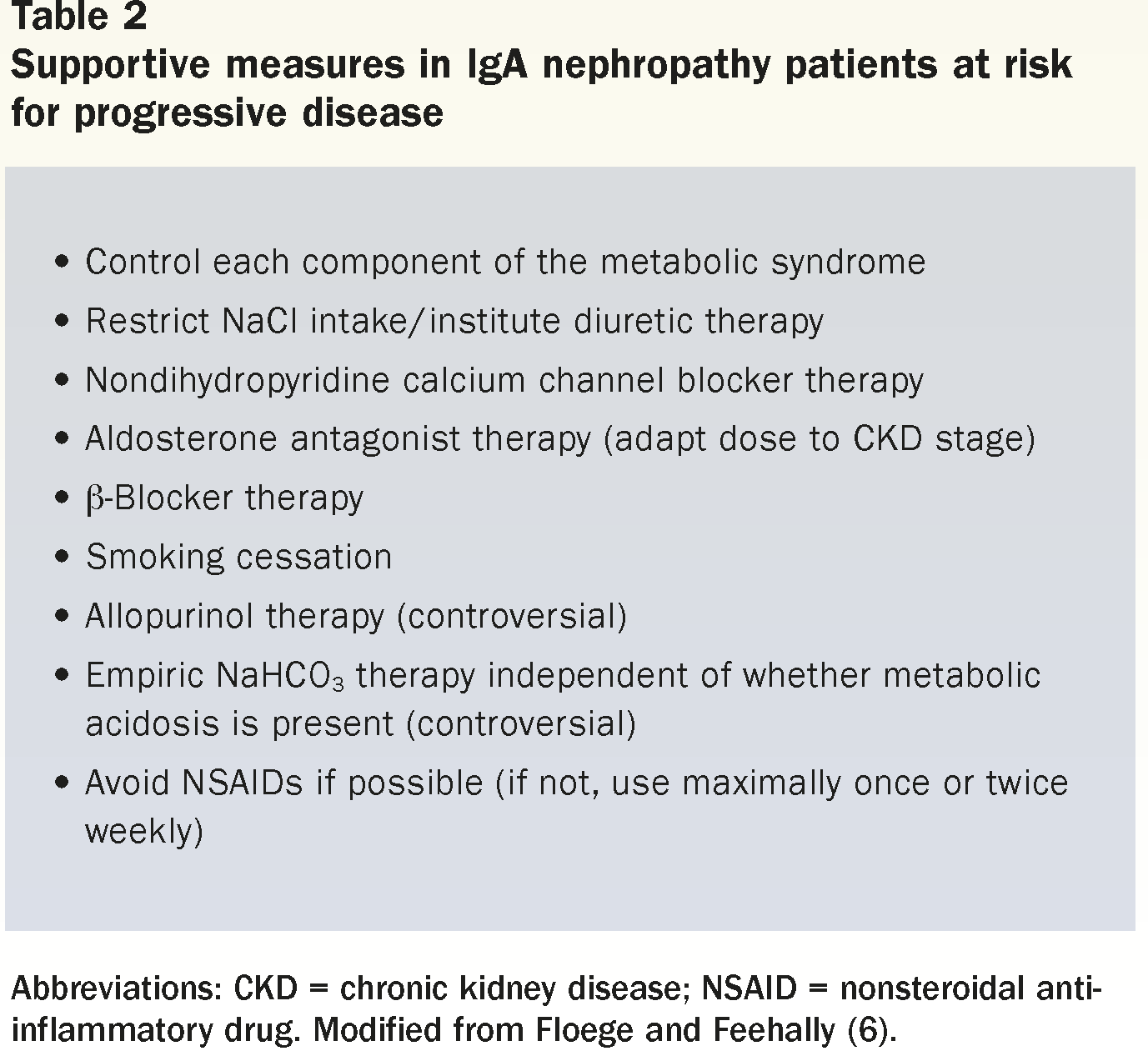 Who should receive immunosuppression, and if so, which one?

Immunosuppression should only be considered in patients at risk for progression of IgAN (see above). There is relative consensus not to offer immunosuppression to patients with a GFR below 30 mL/min at baseline, unless one of the very rare rapidly progressive courses with widespread crescents and glomerular necrosis is present (7). Importantly, the detection of a single crescent in an otherwise stable clinical setting does not warrant immunosuppression but should rather call for RAS blockade. Immunosuppression has mostly relied on systemic corticosteroids, whereas combination therapy, mycophenolate mofetil, and calcineurin inhibitors are discouraged (7). A landmark trial in 1999 (8) as well as some subsequent trials showed that a 6-month course of initially high-dose corticosteroids with tapering can stabilize the course of disease. This trial and the subsequent trials, however, suffered from inconsistent RAS blockade or the requirement to halt RAS blockers before randomization (6). In our recent STOP-IgAN Trial, a 6-month-long optimization of supportive measures reduced GFR loss so much that no added benefit of immunosuppression on the course of GFR could be detected (9). An effect of immunosuppression on inducing full clinical remission was noted in some patients with a baseline GFR above 60 mL/min, but this benefit was offset by a 50% increase in infections and significantly more diabetes induction and weight gain (10). Thus, at present, systemic corticosteroids should be used restrictively in high-risk IgAN patients, only be considered after optimization of supportive measures, and probably be reserved for those patients who still exhibit a proteinuria above 2 to 3 g/d despite these measures.

What novel therapies are on the horizon?

Given the uncertainty of the value of systemic immunosuppression in IgAN and our increasing knowledge on the pathogenesis of IgAN, alternative approaches are of great interest. On the basis of a small pilot trial (10), the NEFIGAN Phase II Trial recently evaluated effects of budesonide encapsulated to achieve preferential release in the terminal ileum in high-risk IgAN patients. In data presented at ASN Kidney Week 2015, this approach reduced proteinuria and stabilized GFR in the patients. A phase III trial is currently in the planning phase.