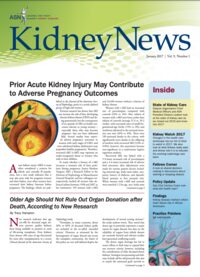 The likely repeal of the Affordable Care Act (ACA) early in the Trump administration has placed patients who gained coverage through the legislation and the ACA’s value-based kidney care initiatives in limbo.

The Trump administration and Republican leaders in Congress are vowing to quickly repeal the ACA when they take power in January 2017. The repeal is expected to allow a 2–3 year grace period for parts of the ACA to continue. After that time, Republicans are expected to replace the ACA with their own legislation.

The planned repeal raises many questions about what will happen to patients who gained coverage under the legislation, ACA programs for patients with kidney disease, and some of the patient protections in the bill.

President Trump said shortly after the election that he would keep some protections, such as provisions that prevent individuals from being denied coverage based on preexisting conditions.

“From what I’ve seen, there seems to be a slight pulling back from a full repeal and all of its features,” said Jeffrey Silberzweig, MD, chief medical officer at the Rogosin Institute. “I’ve always believed in a cautious approach to things, so I’m pleased to see that.”

But John Sedor, MD, chair of the American Society of Nephrology’s Public Policy Board and a nephrologist at MetroHealth System in Cleveland, is concerned that some of his patients who gained access to insurance through the ACA may lose it. He noted that the number of patients without insurance at the public hospital where he works dropped from about 16–18% before the ACA to about 4% after. Those most vulnerable to losing coverage are patients, particularly minority patients, who also have the greatest risk of advanced chronic kidney disease (CKD), he noted.

“For CKD patients, it could destabilize their insurance and reduce their access to care,” he said.

Both President Trump and House Speaker Paul Ryan (R-WI) have proposed changing Medicaid into a block grant program, which they say would give states more flexibility in how they administer the program. These changes could mean that coverage under Medicaid would vary by state.

The effect of this change on health care providers would likely depend on which state they practice in, Silberzweig noted. For example, the Rogosin Institute is based in New York State, which has been generous in providing access and funding for the state’s Medicaid program.

“It would have less of an impact [in states like New York], than in states that have not historically been as generous,” he said.

The United States has launched several efforts in the past 8 years to shift away from a fee-for-service payment model for physicians to value-based payments. The future of the Center for Medicare & Medicaid Innovation (CMMI), which administers many of these models, may hang in the balance as Republicans reshape health reform.

The 2015 MACRA legislation, which established a new system for Medicare payments for doctors that emphasizes value-based care, was passed by huge bipartisan majorities in both houses of Congress, noted Robert Doherty, senior vice president of policy and government affairs at the American College of Physicians, during a session on alternative payment models at Kidney Week 2016 in November. The MACRA legislation, which goes into effect this year, is unlikely to be changed under the new administration, he noted.

But the CMMI, which was created under the ACA and also has a role in MACRA, could be in jeopardy. The CMMI was created to test and fund various innovative payment and quality improvement programs, including the Comprehensive ESRD Care Model and the Medicare Shared Savings Program.

“Here’s the one interface with ACA that has me concerned,” Doherty said. “If Republicans deliver on repealing all of the [ACA], the innovation center would go away. Where would the funding come from for all the projects being supported by the [CMMI]?”

The CMMI has been unpopular with Republicans, noted Sedor. For example, more than 150 Republican congressmen and women sent a letter to Centers for Medicare & Medicaid Services administrators in September 2016 arguing that the CMMI had overstepped its authority in creating mandatory payment demonstration projects (http://bit.ly/2d1CDRY). Among those signing the letter was Sen. Tom Price, MD, (R-GA), and President Trump’s nominee to head the Department of Health and Human Services.

It might be possible to create other mechanisms besides the CMMI to take over MACRA-related roles, Sedor said. “We’re going to have to wait and see how things evolve when they take over,” he said.

Organizations, like the Rogosin Institute, that are participating in the the Comprehensive ESRD Care Models and have invested heavily in infrastructure and staff for the projects are concerned about what will happen to their projects if CMMI disappears.

“It would be very difficult for us if they completely pulled funding for existing projects,” Silberzweig said. “I think it would be fairer to continue funding existing projects at least for the demonstration period that was part of the original proposals and not fund new projects.”

“My view is that we all need to proceed cautiously at this point until we get into [the new year] and the new administration steps in and does whatever they are going to do,” Silberzweig said.

Sedor urged the administration and Congress to carefully consider the impact of any changes they make on people who are currently covered under the ACA.

“I’m a fan of the ACA,” he said. “It certainly has issues that need to be addressed. But it was a game changer in terms of providing access to millions of people who were uninsured.”