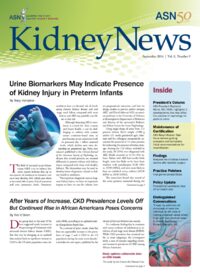 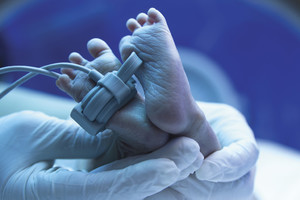 The field of neonatal acute kidney injury (AKI) is in its infancy, but some reports indicate that up to one-quarter of newborns in intensive care units may develop AKI, which puts them at increased risk of poor clinical outcomes and even premature death. Premature newborns have an elevated risk of developing chronic kidney disease and end stage renal failure compared with term infants, and AKI may possibly contribute to this risk.

Although detecting AKI in newborns is critical for their current and future health, it can be challenging to achieve with current serum creatinine–based tests, in part because serum creatinine levels on postnatal day 1 reflect maternal levels, which decline over time depending on gestational age. Now, new research published in the Clinical Journal of the American Society of Nephrology indicates that several proteins are excreted differently in preterm infants with kidney injury compared with those with healthy kidneys. The biomarkers may be used to develop better diagnostics related to kidney health in newborns.

“Having better diagnostic tests to diagnose kidney injury can have an important impact on how we care for infants, how we prognosticate outcomes, and how we design studies to prevent and/or mitigate AKI,” said David Askenazi MD, an associate professor in the University of Alabama at Birmingham’s Department of Pediatrics and director of the university’s Pediatric and Infant Center for Acute Nephrology.

Of the biomarkers that were significantly different between patients with and without AKI, all had fair discriminative capability, with the highest being uromodulin, followed by α-GST and EGF. The biomarkers with the lowest discriminative ability were clusterin and albumin.

Although other studies have suggested that urine kidney injury molecule-1 (KIM-1) can be an early marker of AKI in premature infants, the marker was not significantly associated with serum creatinine elevation in this study. “This could be due to differences in tubular development in premature infants, or it could be that the reasons for elevation of serum creatinine were different in our cohort compared to others,” the authors wrote.

The researchers also noted that their work previously found a protective association between AKI and preeclampsia in premature infants, which was again present in this study. They explained that it is possible that preeclampsia alters the physiology of the premature kidney in a way that reduces its susceptibility to develop AKI, for example by causing episodes of ischemia pre-conditioning. Studies with larger cohorts are underway to address some of the study’s remaining questions and limitations.

“The burgeoning field of AKI urinary biomarkers has largely ignored one of the most vulnerable populations, namely very-low-birth–weight infants. This study has examined 14 multiplexed biomarkers in a relatively large cohort, confirming the results of previous smaller studies examining only a single biomarker,” said Prasad Devarajan, MD, FAAP, who was not involved with the study and is the director of the Division of Nephrology and Hypertension at Cincinnati Children’s Hospital Medical Center. “If validated in larger multicenter cohorts, these findings hold promise for the development of biomarker panels to predict neonatal AKI and its adverse outcomes, as well as to design clinical trials guided by biomarker changes.”

Additional research is needed to determine whether the candidate biomarkers predict significant clinical outcomes, including the development of chronic kidney disease, and whether interventions guided by the biomarkers can impact these outcomes.

Disclosures: All authors declare no real or perceived conflicts of interest that could affect the study design, collection, analysis and interpretation of data, writing of the report, or the decision to submit for publication. Askenazi is a speaker for the Acute Kidney Injury (AKI) foundation, Baxter, and BTG. He received a career development award from ASN. That support was critical to gathering of the data for this work.