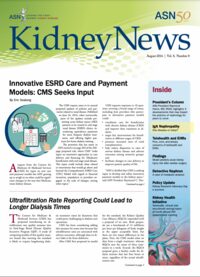 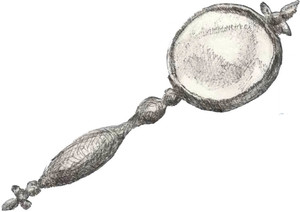 The detective sits facing the window. He is silent for a moment, then quickly turns around.

Nephron (smiling): You forget about mixed double and triple acid base disturbances. But please, continue.

Tubule So this is a young female—rather healthy, with only a history of migraines and depression—who presented with one week of progressive shortness of breath, generalized malaise, and loss of appetite.

Tubule . . . an anion gap of 11. So this is a normal anion gap metabolic acidosis.

Nephron Interesting. So we have a hyperchloremic metabolic acidosis. I’m guessing she doesn’t have diarrhea, or else you wouldn’t be bothering me with this.

Tubule Well, for hyperchloremic metabolic acidosis, you want to see whether there is a kidney-related cause or an extrarenal cause.

Nephron Remember there are only two body systems in my nephrocentric mind . . . renal and extrarenal.

Tubule Well, the patient hasn’t complained of any diarrhea, otherwise . . . I don’t know.

Nephron I see. Ms. Tubule, Let’s take it one step at a time. If you have acidemia, what should the kidney be doing? Should the urine be acidic or alkaline?

Tubule Acidic! The kidney needs to dump that acid to help us cope with this acidemia.

Nephron Good. So if the kidney is able to dump acid and get rid of it, the kidney is doing the right thing, right? In other words, it’s not a distal nephron problem (where the fine tuning of acid–base is headquartered). So if you are dumping acidic urine, your problem lies in the gut or the proximal tubule most of the time. If you are having alkaline urine, your problem lies in the distal tubule most of the time. Because if the kidney is the problem and you truly have a nephrogenic tubular acidosis (my term for renal tubular acidosis), it’s really a distal tubule problem and you cannot acidify the urine.

Nephron How is the urine anion gap calculated?

Tubule Urine anion gap . . . Oh! So that would be the urine sodium plus potassium, minus the urine chloride. If there is more chloride than sodium and potassium—that is, the urine anion gap is negative—then we presume that extra chloride is balancing high ammonium excretion, which is the proper renal response to acidemia, implying an extrarenal cause of acidosis.

Nephron Right. More precisely, urine anion gap is a surrogate marker for the ability of the kidneys to excrete acid in the form of NH4+. What about the urine pH?

Henle It also represents decreased NH4+ excretion in the kidney.

Nephron (jumping in): Careful with that quick reflex thinking. Let’s think this through. The kidney can excrete acid in 3 ways: NH4+, titratable acids, and free protons. NH4+ is the main way the kidneys excrete acid and grossly represents about two-thirds of the total acid excretion load. NH4+ excretion requires 3 things: proximal tubular synthesis, medullary recycling, and intraluminal trapping by free H+ excreted in distal nephrons. We measure NH4+ excretion indirectly with urine anion gap. Free protons represent less than 0.01% of the total acid excretion load. Free protons depend on the activity of the H+-ATPases in type A intercalated cells. We measure free H+ with urine pH. So a high urine pH does not really represent problems with NH4+ excretion.

Now, where were we? We have a hyperchloremic metabolic acidosis that we now suspect is nephrogenic in etiology. I presume the patient has normal renal function?

Henle So now we’re entering the land of renal tubular acidoses or in your words—nephrogenic tubular acidosis. Serum potassium is normal. Her urine pH was 6.5. Her urine anion gap is positive. Her fractional excretion of bicarbonate was 17%.

Nephron I take it this was after she was given IV sodium bicarbonate?

Tubule They were initially giving her sodium bicarbonate when she first came in the emergency department.

Nephron The clinical characteristics of proximal nephrogenic tubular acidosis will vary depending on whether the patient is at steady state or is actively receiving treatment with bicarbonate. They will also vary depending on if the proximal nephrogenic tubular acidosis represents an isolated problem with bicarbonate reabsorption or is part of a generalized proximal tubular disorder.

In this case, another extra piece of information we need to consider is the elevated fractional excretion of bicarbonate (FE bicarbonate), which only occurs in the presence of bicarbonate supplementation.

Nephron Is there other evidence of generalized proximal tubular dysfunction?

Henle She has no hypophosphatemia or hypouricemia; also no glucose in the urine.

Tubule I think this is a proximal or type 2 RTA actively treated with bicarbonate, hence the positive urine anion gap and urine pH of 6.5 as she does have the elevated urinary bicarbonate excretion. But I don’t know from what.

Nephron Let’s stay away from calling thing types 1 and 2. Rather using terms such as proximal and distal is more illustrative of the location and pathophysiology. Numbers confuse physicians – especially nephrologists . . . .

Henle Well, given the evidence so far, I have to agree with Ms. Tubule that there’s definitely some element of proximal RTA. However, the severity of her acidosis is what perplexes me. Normally with proximal RTA, at steady state, the serum bicarbonate is in the 12–20 mEq/L range. Her serum bicarbonate is borderline low and her presentation quite severe for what I would expect.

Henle So I’m not sure. But in the differential for proximal RTA, we think of congenital transport defects–doubtful for it to present in a middle-aged woman. Lead, mercury, cadmium, copper could also do it, but I don’t think she’s had any exposure to heavy metals. I don’t think she has Wilson’s disease, either. Infiltrative conditions–multiple myeloma, amyloidosis–are a possibility as well . . . And your favorite test–serum free light chains–had a normal ratio for her kidney function.

Nephron Are there medications she is taking that are associated with proximal tubular dysfunction?

Henle She’s not on acetazolamide, tenofovir, or any chemotherapy agents as she has no cancer.

Tubule Her only medicine is topiramate.

The detective’s eyes brighten as he suddenly looks up at Ms. Tubule for a split second, then looks down again.

Henle and Tubule, in unison What?

Nephron Do we have the pH of the original urine sample? Before bicarbonate infusion?

Ms. Tubule flips frantically through her index cards as though the world were looking on.

Nephron So this patient demonstrates the inability to acidify her urine also in steady state conditions. In the face of severe acidemia one would expect her urine to be maximally acidified, and yet this young patient with otherwise normal renal function is unable to get the urine pH lower than 5.5.

Henle A problem with distal acidification. So you’re thinking about a distal RTA also?

Nephron Exactly. In fact, a mixed proximal and distal nephrogenic tubular acidosis caused by topiramate. When was the medication started?

Tubule It was for migraine prophylaxis, started several months ago, and why, the dose was recently increased!

Henle Let me make sure I understand. To summarize, we have a patient who presented with a hyperchloremic metabolic acidosis, symptomatic for 1 week, with bicarbonate initially of 12. The history and urine studies suggested a nephrogenic cause of the acidosis. Potassium was normal. Her urine was consistent with a distal acidification defect, but she also demonstrated increased FE bicarbonate after receiving bicarbonate supplementation. And all of these findings are consistent with adverse effects related to topiramate.

Nephron Indeed. And these derangements typically improve with stopping the medication. In addition, topiramate has also been associated with an increased incidence of calcium phosphate nephrolithiasis and osteoporosis.

Tubule Do you remember the patient we suspected of having mixed RTA secondary to topiramate?

Tubule Right, so on our recommendation the primary team discontinued the medication. She did well with bicarbonate supplementation in the short term and was discharged from the hospital; follow-up labs have completely normalized.

Nephron Very well then. And so, yet again, from a diagnosis of hyperchloremic metabolic acidosis, you have identified an easily reversible cause, and I hope one you will never forget. Let’s have some NY style coffee . . . I have a headache!

The concept of Detective Nephron was developed by Kenar D. Jhaveri, MD, Associate Professor of Medicine, at Hofstra Northwell School of Medicine and an Attending nephrologist at Northwell Health System, NY. Send correspondence regarding this section to kjhaveri@northwell.edu or kdj200@gmail.com.