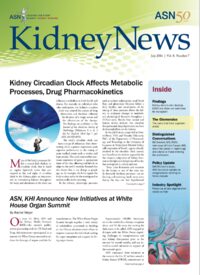 On June 13, 2016, ASN and the Kidney Health Initiative (KHI)—the society’s public-private partnership with the US Food and Drug Administration—participated in a summit the White House convened to address the shortage of organs available for transplantation. The White House Organ Summit brought together a wide variety of stakeholders committed to building on the Obama administration’s efforts to improve outcomes for individuals waiting for organ transplants and support for living organ donors.

Approximately 100,000 Americans are on the waitlist for a kidney transplant alone, and 13 die every day waiting for their name to be called. ASN engaged in dialogue with the White House regarding challenges to transplantation and new kidney therapeutics prior to the summit for several months, and was invited to unveil initiatives in support of the summit’s goals.

ASN announced three initiatives at the summit: the first $7 million toward a kidney disease XPRIZE, commitment to developing a roadmap to achieve the goal of creating a bio-artificial or bioengineered alternative to dialysis, and a partnership with the US Department of Veterans Affairs called the Kidney Innovation Initiative.

Onstage at the White House, ASN announced its commitment of the first $7 million toward a kidney disease prize completion, in partnership with the XPRIZE Foundation.

“With more than 450,000 Americans and millions of people around the world suffering from kidney failure who depend on dialysis to live, ASN is committed to finding a superior alternative that improves their lives and today announced its pledge of the first $7 million toward a possible XPRIZE competition to achieve that goal,” said ASN President Raymond C. Harris, MD, FASN.

Developed in partnership with the XPRIZE Foundation, the kidney disease prize competition would incentivize the development of a novel wearable or implantable device that replaces kidney function and improves patient quality of life.

The Medicare program entitles every American suffering from kidney failure—regardless of age— to lifesaving dialysis at a cost of nearly $35 billion annually, more than the National Institutes of Health’s total budget. Despite this commitment to care for patients with kidney diseases, little innovation in the field of kidney treatment has occurred for decades.

“ASN believes a prize competition has the power to catalyze the radical degree of change patients deserve and to ignite the science that is poised to develop life-changing solutions,” Harris said.

Michelle A. Josephson, MD, FASN, former chair of the ASN Transplant Advisory Group, made the kidney disease XPRIZE announcement on behalf of ASN.

“It was wonderful to see the White House recognize the problem of kidney failure, the large number of people affected by kidney failure, and that treatments need innovation and improvement,” Josephson said. “As excellent as our interventions are, they are not good enough; we really need improvements in the dialysis field.”

Following a morning of panel discussions and other announcements of commitments to advance the goals of increasing access to transplantation, participants divided into breakout groups—including one group focused on innovation opportunities. In that discussion, XPRIZE emerged as “really the subject of the roundtable with members of the FDA, CMS, and some of the other scientific agencies there, talking about the best way to get this implemented and to move things forward,” recounted ASN Public Policy Board Chair John R. Sedor, MD, FASN.

“We also focused on kidney diseases under-recognized, as research in kidney diseases has been underinvested, and we asked the White House to help us raise awareness about the problem kidney disease is for patients across the country and in fact, worldwide,” Sedor said.

In addition to pledging the first $7 million for the kidney disease XPRIZE, ASN announced the Kidney Innovation Initiative—a partnership with the US Department of Veterans Affairs (VA) that challenges innovators worldwide to compete in developing technology resources that improve quality of life and outcomes for people with kidney diseases and those anticipating a kidney transplant.

Also at the summit, KHI committed to initiate the development of a roadmap that will describe scientific, technical, and regulatory milestones needed to achieve the goal of creating a bio-artificial or bioengineered alternative to dialysis as renal replacement therapy. The roadmap will consider challenges to development, provide “state of the art” expectations for entrepreneurs and other technology developers, and spur innovation in producing functioning kidney replacements by engaging stakeholders, identifying research priorities to alleviate critical knowledge gaps, and advancing the science of alternatives to dialysis.

The White House asked participating organizations, companies, and other stakeholders to report back on progress concerning the goals and announcements set at the summit in 6 months.

“We think this is a very positive step that the White House has identified kidney disease broadly as an issue which is very important for the country’s health. We are delighted that they took the time and energy to put together this conference, and we’re hoping this is just the beginning of a much larger initiative,” Sedor said.