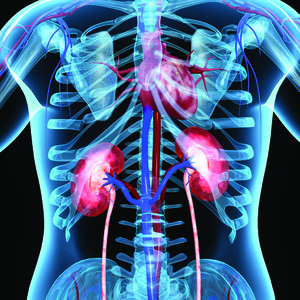 “There is increasing awareness that acute kidney injury is both a major source of immediate morbidity and mortality and has a long-term impact on the development of chronic kidney disease,” said Raymond Harris, MD, FASN, President of the American Society of Nephrology. “Unfortunately, we still lack effective therapies to prevent or treat AKI. Therefore, it is encouraging that these three studies provide important new insights into the pathogenesis and offer potential avenues for prevention and treatment of AKI.”

Previous research has suggested that ultrasound preconditioning of adrenergic neurons innervating the spleen has an anti-inflammatory effect—including protection against severe sepsis-induced AKI in a mouse model. Those studies identified the cholinergic anti-inflammatory pathway (CAP) as the central mechanism of protection.

In a new study, Tsuyoshi Inoue, MD, PhD, Chikara Abe, MD, and colleagues at the University of Virginia School of Medicine in Charlottesville sought to build on that knowledge by testing whether similar protective effects could be induced by ultrasound stimulation of the vagus nerve. In their mouse model, vagal nerve stimulation (VNS) ameliorated renal IRI via the same CAP activated by ultrasound. The findings included evidence that vagal efferents were the common pathway activating the CAP.

The results highlight the importance of neuroimmunomodulatory mechanisms of AKI—for example, the “interorgan crosstalk” by which injury to one kidney affects the response of the other kidney.

“In the setting of multiorgan failure, such neural mechanisms are likely to be even more important,” writes Simon J. Atkinson, PhD, Vice Chancellor of Research at Indiana University–Purdue University, Indianapolis, in an accompanying commentary. “This is a relatively neglected aspect of AKI and one that, as this new work clearly demonstrates, deserves much more attention.”

Dr. Atkinson said the findings of VNS and ultrasound show promise as a “practical preventative clinical strategy” for AKI—although, unfortunately, likely not for treatment of AKI that has already started to progress. “Given the risk and benefit profile of this strategy, one could imagine this approach being employed widely in critical care settings to reduce the risk of the serious consequences of AKI,” he said.

Drs. Inoue and Abe and colleagues note that VNS is already clinically used for treatment of drug-resistant epilepsy and depression, and is being studied for use in inflammatory disorders such as rheumatoid arthritis and inflammatory bowel disease. They predict that future studies will inform the use of therapeutic ultrasound, as a less-invasive alternative to VNS, to prevent acute injury to the kidneys as well as other organs.

The findings clearly showed that the proximal tubule cell was the source of CL-11 responsible for mediating postischemic renal injury. The researchers also found that CL-11 binding to targeted epithelial cells was easily blocked by soluble monosaccharide inhibitors—suggesting a “physiological control mechanism that merits further exploration and exploitation” of CL-11 as a therapeutic target for hypoxic renal injury. Drs. Zhou and Sacks and colleagues add, “The broad expression of CL-11 and its putative ligands makes it possible that CL-11 operates on a wider scale, promoting inflammation and immunity in other organs and conditions.”

David D. Aufhauser, Jr., MD, and Zhonglin Wang, MD, of the University of Pennsylvania performed a study to explore the previous finding of improved recovery from IRI in females compared to males. In a mouse model of renal ischemia, the researchers found that tolerance of IRI was “profoundly increased” in females versus males. They also noted an “intermediate phenotype” of IRI tolerance after neutering of either sex.

Further experiments found that renal IRI was greater in female estrogen receptor-α knockout mice, as well as a protective effect of supplemental estrogen administration to female mice before induction of ischemia.

Are the findings relevant to human transplant recipients? Analysis of United Network for Organ Sharing data on deceased-donor kidney recipients found a stronger association with delayed graft function in male versus female recipients. “We demonstrated that both donor and recipient hormonal milieus contribute to renal IRI tolerance,” the researchers write. “Recipient effects are dominant in human transplant outcomes, while donor effects appear somewhat stronger in mice.”

Obviously, more research will be needed to explore the clinical ramifications of the findings. But for now, Drs. Aufhauser and Wang and coauthors conclude, “[O]ur results demonstrate that sex affects renal IRI tolerance in mice and humans and indicate that estrogen administration has potential as a therapeutic intervention to clinically improve ischemia tolerance.”

If the protective effects of estrogen are supported by further studies, there may be important implications for protecting against AKI as well, according to an accompanying editorial by Dr. Sanjeev Noel and colleagues of Johns Hopkins University. Coronary artery bypass graft surgery and other scenarios associated with a high risk of AKI “are excellent opportunities to examine the role of sex-specific differences in IRI and determine whether estrogen therapy can be beneficial toward protecting the kidney,” they write.