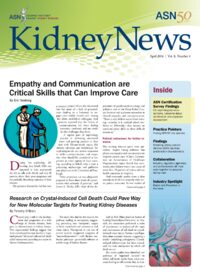 Crystals play a role in the development and progression of a wide range of diverse diseases, from gout to atherosclerosis to kidney disease. New experimental findings suggest that these crystallopathies may involve a “regulated process” of crystal-induced cell death called necroptosis, according to a report in Nature Communications.

The study also clarifies the steps in the pathway leading to necroptosis, suggesting promising new therapeutic targets to limit crystal-induced cytotoxicity and tissue injury. Necroptosis is just one of several recently recognized categories of “necroinflammation”—with distinct molecular pathways—potentially relevant to a wide range of kidney diseases.

Led by Prof. Hans-Joachim Anders of Ludwig-Maximilians-Universitat in Munich, the researchers performed a series of experiments to understand the types and mechanisms of cell death in crystal-induced tissue injury. Various crystallopathies share common features, suggesting a similar underlying pathogenesis. Crystal-induced inflammation has been considered the main mechanism by which cell death occurs.

But recent studies have identified new pathways of “regulated necrosis”—in which cell death results from active processes leading to cell necrosis that, in turn, promotes inflammation. In their experiments, Prof. Anders and colleagues focused on the pathway of necroptosis: a regulated process of necrotic cell death specifically dependent on receptor-interacting serine-threonine kinase 3 (RIPK3) and mixed lineage kinase domain-like (MLKL).

Further studies were performed in a mouse model of crystal nephropathy, in which oxalate exposure leads to crystal-induced tissue injury and organ failure. Oxalate induced CaOx deposits in Ripk3- and Mlkl-deficient mice, as in wild-type animals. However, all functional and structural indicators of crystal nephropathy were significantly reduced in the Ripk3- and Mlkl-deficient mice—including serum creatinine levels, markers of tubule necrosis, and neutrophil recruitment.

Additional experiments suggested that necroptosis is responsible for inducing inflammation in the presence of crystal nephropathy, as inhibiting necroptosis also prevented inflammation. There was also evidence of secondary necroptosis driven by TNF.

The findings add to a growing body of evidence on the bidirectional causal associations between kidney injury and inflammation. Prof. Anders is also coauthor of a recent review in the Journal of the American Society of Nephrology that highlights the growing body of evidence for a “genetically determined and regulated process” of necroinflammation. (Co-authors of the JASN review are Drs. Shrikant R. Mulay of Klinikum der Universität München and Andreas Linkermann of Christian-Albrechts-University Kiel.)

The concept of necroinflammation provides a unifying theory of the relationship between kidney injury and inflammation, which are “reciprocally enhanced in an autoamplification loop,” according to the Nature Communications study. Just in the last few years, researchers have made progress toward outlining a number of different molecular pathways by which necrosis induces inflammation and inflammation induces necrosis.

By showing that crystal-induced cell death occurs through a regulated process and identifying the mediators involved in necroptosis, the new study identifies some potentially effective new therapeutic targets. In vivo experiments showed reduced evidence of crystal nephropathy in animals treated with necrostatin-1; as well as etanercept, which blocks TNF-α; and R-7050, a TNFR internalization inhibitor.

What’s the relevance to human kidney disease? On review of a large series of human kidney biopsies, Anders and colleagues found CaOx crystals in association with acute tubular injury in 10% of 4125 cases of acute kidney injury. On immunostaining, crystal-induced cytotoxicity in human cells appeared similar to that in mouse cells, including activation of MLKL.

Alberto Ortiz, MD, PhD, of Fundacion Jimenez Diaz and University Autonoma of Madrid noted, “Indeed, oxalate may cause acute kidney injury in ‘juicers’—individuals who may inadvertently consume huge amounts of oxalate-rich fruit and vegetables by juicing these in the course of ‘healthy’ dieting.”

The results may help to refine understanding of the process leading to crystal-induced cell death in several human diseases. “Cell death in this context has hitherto been regarded mainly as a passive process of cell loss due to irreparable damage,” Anders said. “But we have now demonstrated that it is the outcome of a regulated process, which actively eliminates cells.”

Treatments focusing on specific mediators of the necroptosis pathway could offer important advantages, compared to previous strategies directed at the inflammatory reaction. If blocking those mediators can prevent crystal-induced cell death, it might also impede the development of chronic inflammation—with potentially important implications for management not only of acute kidney injury, but also other conditions such as gout and atherosclerosis. Prof. Anders and colleagues write, “Together, TNF-α/TNFR1, RIPK1, RIPK3, and MLKL are molecular targets to limit crystal-induced cytotoxicity, tissue injury, and organ failure.”

Together, all of these processes suggest an extensive list of molecular therapeutic targets with the potential to interrupt the process of necroinflammation. A key issue will be whether delayed treatment aimed at inhibiting these regulated processes of cell death will be able to prevent kidney injury in AKI and other conditions. Mulay, Linkermann, and Anders concluded, “The various aspects of necroinflammation offer great opportunities for novel discoveries and eventually also for novel treatment options for patients with kidney disease.”

“The impact of an improved understanding of the molecular drivers of regulated necrosis and subsequent inflammation may extend well beyond the kidneys,” Ortiz said. He pointed out several systemic diseases in which crystals play an essential role in pathogenesis, and which may be amenable to new treatment approaches targeting regulated necrosis and inflammation: “These include oxalate crystal deposition, which is systemic in oxalosis; atheroembolism, which consists of systemic cholesterol crystal emboli and currently has no specific therapy; and cystinosis, a systemic disease in which cysteamine therapy delays but may not completely prevent systemic complications.”