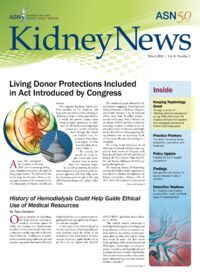 Looking back to this time last year, ASN was commending President Obama for his bold leadership in securing a budget increase for NIH and NIDDK in 2016. Regrettably, his 2017 budget proposal would short-change NIDDK and kidney research. Kidney disease affects more than 20 million Americans and costs Medicare $80 billion. The Medicare End-Stage Renal Disease Program alone costs $35 billion, more than NIH’s entire budget. Yet federal investments in kidney research are less than 1% of total kidney care costs.

There have been several major breakthroughs in the past several years thanks to NIDDK-funded research. For example, geneticists focused on the kidney have shaped our understanding of the pathogenesis of nephrotic syndrome and chronic kidney disease. Just last year, scientists announced a method for growing new kidneys in a laboratory as well as a rapid method for screening new prescription medications using kidney cells that would spare the expense and time of conducting human clinical trials.

Change is on the way because of advances made through NIDDK-funded kidney research. Additional, sustained funding is needed to accelerate these and other novel therapies that could improve the care of patients with kidney disease and result in significant savings to Medicare. A failure to maintain and strengthen NIDDK’s ability to support the groundbreaking work of researchers across the country carries a palpable human toll, denying hope to the millions of patients awaiting the possibility of a healthier tomorrow.