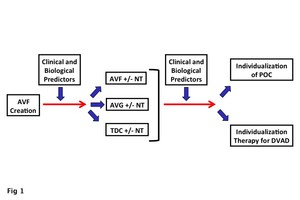 Scope of the problem

Arteriovenous fistulae (AVFs) are the preferred form of permanent dialysis vascular access because of their prolonged long-term survival and lack of infection. Indeed, the Fistula First initiative has increased the current AVF prevalence from under 30 percent to over 60 percent in the United States. The main complication of AVFs is a very high failure-to-mature rate (defined as the inability of the AVF to increase blood flow and diameter adequately to support hemodialysis). Currently, as many as 60 percent of AVFs are unsuitable for dialysis between 4 and 5 months after surgery (3). Some of these failures could be due to the placement of AVFs in patients with small vessels or with other predictors of AVF failure. The main reason for AVF maturation failure at a pathogenetic level is likely a combination of an aggressive neointimal hyperplasia (myofibroblast and smooth muscle cell ingrowth from the media) combined with a possible lack of outward remodeling (dilatation) (1, 4).

Arteriovenous grafts (AVG), by contrast, do not have these early failure-to-mature problems, and over 90 percent of surgically created AVGs can in fact be used for hemodialysis within the first 6 weeks after surgery. The main problem with AVGs, unfortunately, is a predictable stenosis at the graft–vein anastomosis resulting from neointimal hyperplasia, which is responsible for a dismal 1year primary patency of only 23 percent.

The least desirable form of permanent dialysis vascular access is the tunneled dialysis catheter (TDC), which carries a huge morbidity and mortality burden as a result of catheter-related bloodstream infections; fibrin sheath formation, which results in inadequate blood flow; and central vein stenosis. Despite the significant increase in both morbidity and mortality and the cost associated with TDC dysfunction (5), almost 80 percent of new (incident) patients starting hemodialysis do so with a TDC.

An important focus of the broader vascular access community—physicians, nurses, hospitals, and payers (particularly the Centers for Medicare and Medicaid Services)—over the past decade has been on the Fistula First initiative. This initiative, which began over 10 years ago, has been amazingly successful in that it has increased the AVF prevalence rate from under 30 percent to over 60 percent currently (6). Whereas the Fistula First initiative was clearly the need of the day when the AVF prevalence rate was low, it is unclear whether the same drivers are still in play, with the current AVF prevalence rate of 61 percent nationally. In particular, the higher AVF prevalence suggests that rather than a one-size-fits all approach, it may be time to move toward a more individualized approach to vascular access care (7, 8).

Several factors are currently thought to be associated with a higher incidence of AVF maturation failure in particular. They include small arteries (<1.5–2 mm) and veins (<2.5–3 mm), female gender, obesity, the presence of peripheral vascular disease, older age, and African American ethnicity. The availability of these factors does not appear to have had a significant impact on AVF maturation, however, which could result from the poor predictive power of these criteria or, alternatively, the lack of a unified approach to the application of this information to routine clinical vascular access care. Thus, we are still left with multiple instances wherein an AVF created in an older patient or in a patient with small vessels undergoes successful AVF maturation, whereas an AVF created in a younger patient or in a patient with larger vessels fails to mature. In an attempt to address this specific issue, the Hemodialysis Fistula Maturation Consortium, funded by the National Institutes of Health, has collected extensive clinical, demographic, biologic, and process of care data in over 600 patients receiving a new AVF and is in the process of linking some of these data with AVF maturation success or failure (9).

Outside of AVF maturation, however, we have absolutely no clinical predictors of AVG success or failure, for example, nor of the factors that may be able to predict a good response to angioplasty with or without stent placement in patients with AVF and AVG stenosis. We therefore believe that it is essential to develop high-quality clinical and biologic predictors of dialysis vascular access dysfunction in such a manner that future patients receiving a new dialysis vascular access or undergoing an angioplasty with or without stent placement could be stratified into high-risk and low-risk groups based on a combination of such predictors. Some examples of specific biologic predictors, in particular, could include genetic polymorphisms, flow-mediated dilatation, and aortic pulse wave velocity.

Targeting high-risk patients with technology and process of care interventions

The development and validation of high-quality clinical, demographic, and biologic predictors for dialysis vascular access dysfunction (in the context of both initial surgical placement and later endovascular and surgical intervention) could result in several important downstream effects.

Second, such an enhanced “predictor panel” could also be used to individualize the initial choice of vascular access, in that patients at high risk of AVF maturation failure could receive an AVG instead. Such a choice could potentially also reduce the current epidemic of TDC use during prolonged periods of AVF maturation.

Last but not least, patients at higher risk of dialysis vascular access dysfunction could be placed into a more intensive “process of care” pathway in that they could be fast tracked for early surgery and more aggressive follow-up with dedicated vascular access coordinators.

Putting it all together

We strongly believe that we need to move away from a one-size-fits-all paradigm into a construct wherein we try to individualize vascular access care in such a manner that we place the right access in the right person at the right time (Figure 1). To do this, however, we desperately need high-quality and well-validated predictors, particularly those that are derived from the biologic aspects of vascular access dysfunction.

Prabir Roy-Chaudhury MD, PhD, is professor of medicine, director of the division of nephrology, and director of the Arizona Kidney and Vascular Center, University of Arizona College of Medicine and Banner University Medical Center.