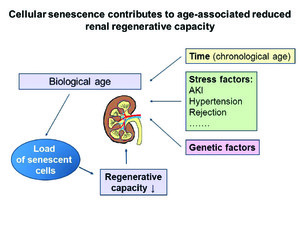 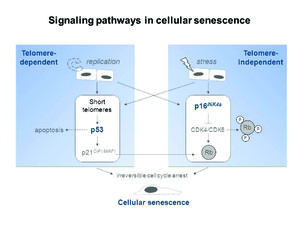 One of the major challenges for today’s society is the growth of the elderly population. By 2030, the age segment over 65 years will have nearly doubled, and the incidence of multiple age-associated disorders is predicted to increase in parallel. Age-associated changes of the kidney are important not only because normal aging alters renal function, but also because of the high frequency of ESRD in the elderly population (1). Moreover, old kidneys perform poorly when they experience acute kidney injury or after transplantation (2, 3), highlighting one of the hallmarks of renal aging—its markedly reduced regenerative capacity. Accumulation of senescent cells during aging and as a result of acute and chronic diseases, along with a certain genetic predisposition, are proposed to be responsible for insufficient repair potential and functional loss (Figure 1) (4–6).

Cellular senescence is a fundamental biologic program resulting in irreversible growth arrest. Senescent cells are still viable and present in the tissue, but they can no longer replicate and thereby regenerate (7). Cellular senescence can result from progressive telomere shortening or as a response to various pathophysiologic stressors (Figure 2). These stressors are not unique to aging and can also occur in certain disease states. Cellular senescence was initially described in human fibroblasts arresting after 50 to 70 cell divisions with short telomeres (8–10). Short unprotected telomeres lead through stabilization of p53 to cell cycle arrest (telomere-dependent senescence) or apoptosis (11). Protection of telomeres is provided through telomere-binding proteins as well as through telomerase (11, 12). The concept of cellular senescence also includes other forms of permanent, irreversible cell cycle arrest, which are reached by DNA damage, oxidative stress, Ras induction, and epigenetic alterations. The cell cycle regulator and tumor suppressor p16INK4a is associated with this nonreplication-dependent growth arrest by acting upstream of retinoblastoma (telomere-independent senescence) (13, 14). The crucial role of p16INK4a in the development of senescence and chronic renal damage is underlined by the protective effect of ablating the INK4a locus (15).

The phenotype of renal aging consists of a loss in renal mass (mainly cortical mass) (16) and renal function (it is important to note that at least a third of older individuals in the respective studies had normal renal function) (17, 18) and of not very specific histologic changes in all renal compartments (glomeruli, tubulointerstitium, and vasculature) (6). In the unchallenged kidney, these aging changes go almost unnoticed. However, senescence of key cells in the kidney is particularly unfortunate when the tissue receives unusual stresses. Injury evokes dedifferentiation, proliferation, and inflammation. If tubular epithelial cells can heal, injury and inflammation resolve with minimal scarring. If the epithelium has a high burden of senescence, its normal healing is hampered, and the ensuing proinflammatory and profibrotic milieu will result in scarring. Fibrosis that is triggered by senescence-associated secreted factors may thereby compensate for exhausted healing potential, putting fibrosis downstream of the primary senescence process.

Old kidneys show a diminished proliferative response of tubular cells (19, 20), even without any preceding damage confirming an intrinsically reduced proliferative capacity (21). The reduced proliferative potential correlates with markers of cellular senescence, such as the expression of the cyclin-dependent kinase inhibitor p16INK4a, senescence-associated-β-galactosidase, and, in human kidneys, with telomere shortening (20–22). Telomerase-deficient mice with severe telomere loss have an increased susceptibility to renal injury and renal dysfunction (23). Markers of cellular senescence have been found in certain renal diseases, such as glomerulopathies, tubulointerstitial nephritis, and hypertensive nephrosclerosis, and in transplants with chronic allograft dysfunction (24–27). Recently, evidence has indicated a role for cellular senescence in the development and progression of diabetic nephropathy (27). Inasmuch as hyperglycemia has been shown to cause accelerated senescence through SGLT2-mediated excessive uptake of glucose (28), SGLT2 inhibitors might have potential use in antagonizing the senescent phenotype of diabetic nephropathy.

Many problems in clinical nephrology of the elderly seem to involve an interaction between cellular senescence and disease stresses. This may contribute to the normal renal senescence phenotype, the acceleration of this phenotype by hypertension and heart failure, the high frequency of ESRD in the elderly, and the massive nephron dropout after the stresses of cadaveric donation. The appeal of studying mechanisms of cellular senescence in nephrology is the potential for predicting these mechanisms or intervening in them. Identification of those who are at risk of ESRD could be followed by strategies to reduce the stresses. It is possible that bypassing cell senescence mechanisms with drugs or gene therapy could extend the life of old kidneys faced with abnormal stresses such as cadaveric donation or renal disease. This may have to be balanced against the potential to increase renal cancer. The role of cell cycle regulatory proteins and senescence mechanisms in chronic stresses such as glomerular diseases, proteinuria, hypertension, and polycystic disease should be explored, even independently of the problem of aging.