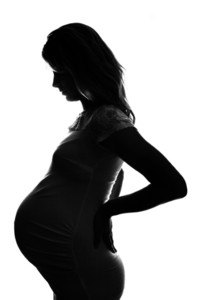 Patients with kidney disease are at increased maternal and fetal risk during pregnancy. In particular, glomerular-based kidney disease is overrepresented among younger patient populations and is therefore a common form of kidney disease that requires management during pregnancy. Potential untoward outcomes include progression of underlying renal dysfunction, worsening of urine protein excretion and hypertension, and untoward fetal outcomes including intrauterine growth restriction and preterm delivery. However, prognostication of an individual woman’s pregnancy-associated risk in the setting of chronic kidney disease (CKD) remains profoundly challenging, especially in the context of glomerular-based kidney disease, wherein there is often a combination of different degrees of renal insufficiency, proteinuria, and hypertension. Most studies to date are too small to account for the potential differential impact of these important factors on pregnancy outcome, leaving the clinician to approximate risk for one of a young woman’s most important life decisions, wherein a bad outcome can have a profound impact on both her long-term health and that of her child. Because the literature provides limited guidance, divergent opinions arise with respect to the impact of kidney disease on future CKD progression and on pregnancy outcomes.

Early studies generally used serum creatinine level to stratify pregnancy risk based on the following thresholds: mild (≤123 µmol/L [1.4 mg/dL]), moderate (124–220 µmol/L [1.4 to <2.5 mg/dL]) and severe (≥220 µmol/L [2.5 mg/dL]) renal insufficiency. It has been well in excess of a decade since Jones and Hayslett published their classic report in the New England Journal of Medicine noting that women with advanced stages of CKD are at risk for loss of kidney function and compromised pregnancy outcomes (1). In this report of 67 women and 82 pregnancies, pregnancy-related loss of kidney function was noted in 43 percent of pregnancies, with 10 percent of women rapidly experiencing progression toward ESRD. Of interest, not all the accelerated loss occurred in patients with the most severe renal compromise, inasmuch as progression to ESRD was also noted in 3 of 9 patients with moderate renal insufficiency—a proportion similar to that in the severe renal insufficiency group. A significant limitation of this study was its reliance on serum creatinine as a marker of renal function, which is too imprecise to stratify women before pregnancy because it does not take into account patient size and muscle mass. Furthermore, in young women, serum creatinine is often inadequately reflective of the actual degree of histologic renal damage. Finally, no adjustments were made for either the degree of urine protein or the presence of hypertension.

Subsequent studies have therefore used the Modification of Diet in Renal Disease formula to classify preconception renal insufficiency. In a more recent study, which excluded women with diabetes or lupus, 49 women with stage 3–5 CKD were divided into four groups based on preconception estimated GFR (eGFR) (≥40 or <40 mL/min/1.73 m2) and proteinuria (≥1 or <1 g/24 h) (2). In women with eGFR 40 mL/min/1.73 m2 or higher, there was no difference in the rate of eGFR decline up to 1 year after pregnancy, irrespective of preconception proteinuria. By contrast, among women with eGFR below 40 mL/min/1.73 m2, the rate of eGFR decline was increased in those with proteinuria 1 g/24 h or higher (2). Although the findings that relate proteinuria and severe renal disease to reductions in eGFR confirm the earlier literature, the absence of any eGFR reduction in the ≥40 mL/min/1.73 m2 group warrants further scrutiny because only 6 women were included in this group with more moderate disease. Furthermore, a recent study that stratified women using the Chronic Kidney Disease Epidemiology Collaboration equation demonstrated that more than 10 percent of patients with stage 2 CKD experienced at least a 25 percent increase in serum creatinine during pregnancy or shortly after delivery (3). Whether this change in renal function was transient was not clear from this study because follow-up data beyond 6 weeks postpartum were not provided.

With respect to fetal and maternal well-being, underlying kidney disease also predisposes to poor outcomes. In a large study of 640 women with stage 1 CKD with hypertension, the odds ratio for pre-eclampsia, small-for-gestational age, or preterm births was significantly elevated and increased with the degree of renal insufficiency (odds ratio = 10.09, 95 percent confidence interval 2.38–42.87, and odds ratio = 2.58, 95 percent confidence interval 1.40–4.75 in women with an eGFR of 60–74 and 75–89 mL/min, respectively) (4). Although microalbuminuria was not noted to increase the odds of the aforementioned maternal or fetal outcomes, none of the patients within this study had macroalbuminuria. As such, the effect of higher levels of urinary protein on pregnancy outcomes could not be examined. Finally, a recent meta-analysis of CKD and pregnancy demonstrated an overall risk of adverse maternal and fetal events that was at least fivefold and twofold higher, respectively, than in the general population (5). However, the poor methodologic quality of the studies included in the review was cited as a major limitation regarding this estimate (5).

Among the few definitive conclusions that can be made about CKD and pregnancy is that risk increases with the degree of renal dysfunction and is further heightened by comorbid conditions like hypertension. Typically, mild kidney disease (CKD stage 1) does not result in a progression of renal dysfunction, but it may still contribute to poor placental implantation and adverse maternal and fetal outcomes. Severe renal insufficiency (CKD stage 4–5), by contrast, frequently compromises maternal and fetal well-being. Pregnancy outcomes in the intermediate CKD stages require further clarification and disease-specific variations, accounting for different diseases, degrees of proteinuria, and even degrees of renal damage. Prior reports of lupus-associated and diabetic nephropathy having worse outcomes than other glomerular diseases should be tested. Because of the heterogeneity and poor methodologic quality of the existing literature, an overall risk estimate is currently difficult to generate. Well-designed studies with adequate numbers of participants are needed to clarify the pregnancy-associated risk faced by women with underlying CKD, and this is likely to require several centers working together to generate the information desperately required to assist the vast majority of young women with kidney disease in making adequately informed pregnancy decisions.