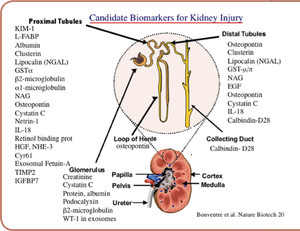 Current Biomarkers in Kidney Disease: Dawning of a New Era

A biomarker is defined as a characteristic that can be objectively measured and evaluated as an indicator of normal biologic or pathogenic processes of pharmacological responses to a therapeutic intervention (1). Examples of biomarkers are proteins; lipids; microRNAs; genomic, metabolomic, or proteomic patterns; imaging determinations; electrical signals; and cells present on a urinalysis. This issue will focus primarily on serum and urine proteins. A partial list of candidate markers for kidney injury is presented in Figure 1 with corresponding sites of injury along the nephron.

Legacy kidney biomarkers include serum creatinine (sCr), blood urea nitrogen (BUN), urinary albumin/protein and volume excretion. However, sCr or BUN cannot distinguish injury from hemodynamic changes in the kidney that lead to appropriate changes in glomerular filtration rate (GFR), particularly when the changes are acute. Furthermore, sCr or BUN cannot change quickly enough with injury since individuals with normal renal function have a functional reserve that is brought into play in response to nephron injury. Other nephrons increase their function so that sCr and BUN may not move out of the “normal range” until there is a great deal of injury and potentially irreversible loss of nephrons. Thus GFR, whether measured by sCr or by more direct methods such as iohexol clearance, is a measure of function of the kidney which is clearly important but which may not move in sync with injury under all circumstances.

Having a biomarker that directly reflects injury, and is easily measured from a body fluid that is easily obtained, such as blood or urine, would change the paradigm to facilitate direct monitoring of injury rather than a secondary consequence of injury—a delayed reduction in GFR. By comparison to the field of cardiology we would move from a state of using changes in cardiac output or identification of heart failure as a reflection of myocardial injury to the use of troponin as a sensitive and specific marker of injury that physicians rely on and act upon. Of course there are other markers, besides troponin, that also provide additional information regarding the status of cardiac function. By analogy, multiple markers will be useful in nephrology, providing different information, for example about site of the injury, involvement of inflammation, and system associations. Some characteristics of an ideal biomarker are presented in Table 1. Biomarkers can be classified as predictive, prognostic, diagnostic, pharmacodynamic, or can be efficacy or surrogate markers (Table 2). 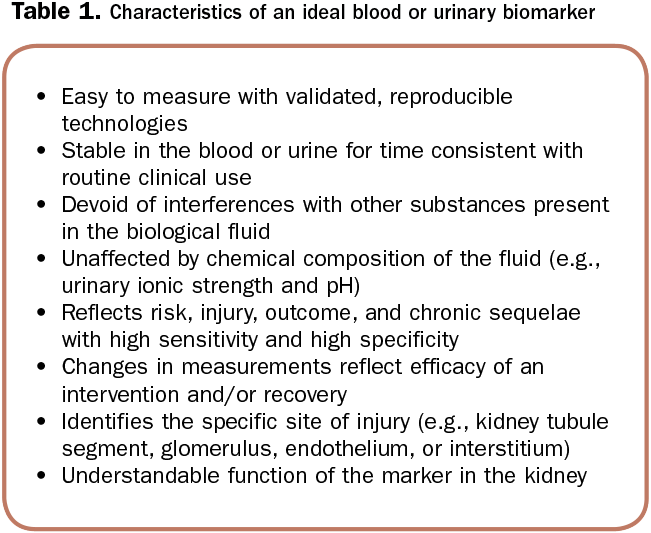 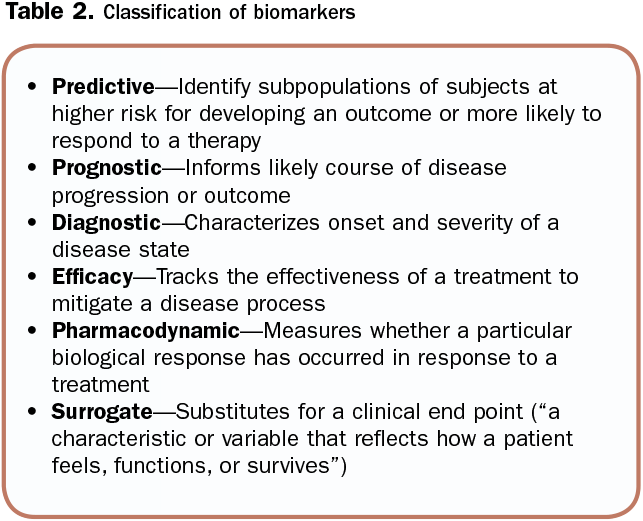 It is well recognized by regulatory agencies that a biomarker will not necessarily be informative in all contexts. In fact, the U.S. Food and Drug Administration (FDA) has developed a very thoughtful process by which they will “qualify” biomarkers in a “fit for purpose” contextualized way (2). There is a fundamental difference between “qualification” and “validation” of a biomarker. The latter term is best used to connote the validity and harmonization across many labs of the assay used to quantitate the biomarker.

In commenting on a major initiative of the FDA that focuses on biomarkers, Janet Woodcock, MD, current Director of the Center for Drug Evaluation and Research at the FDA, stated: “Most researchers agree that a new generation of predictive biomarkers would dramatically improve the efficiency of product development, help identify safety problems before a product is on the market (and even before it is tested in humans), and facilitate the development of new types of clinical trials that will produce better data faster” (3). The FDA has provided guidance that a biomarker can be considered “valid” if 1) it is measured in an analytical test system with well-established performance characteristics, and 2) there is an established scientific framework or body of evidence that elucidates the physiologic, pharmacologic, toxicologic, or clinical significance of the test result (4).

There has been a great enthusiasm of the pharmaceutical industry to work with academia and the regulatory agencies to identify new biomarkers that will facilitate drug development. As a result, much progress has been made on the preclinical identification of biomarkers that identify kidney injury due to a wide variety of toxins as well as ischemia with a very high level of sensitivity and specificity. This predictive safety testing consortium (PSTC) explored in great detail a number of urinary biomarkers and presented the results to the FDA and the European Medicines Agency (EMA) simultaneously. This was the first use of a framework allowing submission of a single application to the two agencies. The FDA and EMA concluded that they will allow drug companies to submit the results of seven new tests that evaluate kidney toxicity—four for tubular injury (KIM-1, albumin, clusterin, and trefoil factor-3) and three for glomerular changes or impaired tubular absorption (cystatin C, total protein, and β 2 microglobulin) (5,6).

Initially this resulted in a great deal of momentum, but things have stalled. Why is this the case? Why have we not moved more rapidly to translate these findings in rats to humans? In many cases, when examined closely, the mechanisms of injury observed in rats carry over to humans. When studying the sensitivity and specificity of biomarkers for kidney injury in the rodent the gold standard is histological injury. The PSTC consortium was meticulous in examining multiple regions of the nephron and multiple compartments (tubular, interstitial, tubule, cortex, and outer and inner medulla) of the kidney. In humans this is not possible. Even in those patients in which biopsy material is available, only a small portion of the kidney is sampled and is likely not to reflect overall injury in an acute setting. As a result, the biomarkers have been generally evaluated using sCr as a gold standard. This leads to faulty conclusions because sCr is so flawed as a gold standard for acute injury. There can be significant injury without a change in sCr, and sCr can change due to hemodynamic factors without injury. We have pointed out the large impact the faulty gold standard has on evaluation of biomarkers (7). This has resulted in a large number of clinical studies where the receiver operator curve analysis (a standard way to evaluate biomarkers) reveals an area under the curve that is often between 0.7 and 0.85, much lower than values of 0.9 to 0.99 that have been reported in animals (8,9). This has introduced a level of caution in researchers, practitioners, and the diagnostics industry.

It can be argued that what really matters is not changes in laboratory values as an adjudicator of biomarker utility but longer term “hard” patient outcomes. While this is certainly true, it means that it may take many years to identify hard outcomes. For example, will an increase in a novel biomarker of kidney injury in a patient administered cisplatin, without a change in sCr, result in the development of hypertension and/or renal disease in later life? If we wait for these data we will lose the opportunity to employ these injury biomarkers. Especially in combination, they often provide a high negative predictive value even when compared to sCr.

Another reason for loss of momentum relates to studies of the kidney injury markers in chronic kidney disease (CKD). It is well known that acute kidney injury is associated with the development and/or progression of CKD (10). It therefore seems reasonable to assume these injury markers will predict progression of CKD, but the patient with CKD has multiple confounders that can potentially alter the rate of progression so that the relationship between a particular biomarker and progression is likely to be variable depending upon the study and the population—a fact that is being borne out in many studies. This does not, however, decrease the importance of a biomarker that provides mechanistic insight into an injury process that is important in the overall course of kidney disease. A list of some of the factors that have held back the clinical use of kidney biomarkers is included in Table 3. 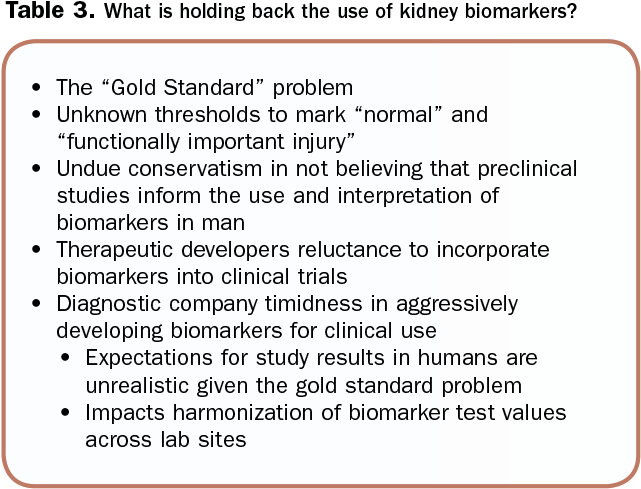 In conclusion, over the last decade there has been intense interest in finding and qualifying new biomarkers of kidney injury. Biomarkers will enable us to diagnose kidney injury earlier and provide better information about the status of ongoing injury in patients with CKD as well as predict the likelihood of progression of disease. This will facilitate personalized medicine by better informing interventional, diagnostic, and therapeutic decision-making to minimize kidney injury and optimize interventional strategies. I am convinced that better kidney injury biomarkers will provide us with better tools that will result in better outcomes for our patients.

ASN Kidney News gratefully acknowledges KN Editorial Board member Edgar Lerma for his contribution as editor of this special section.

Joseph V. Bonventre, MD, PhD, FASN, is Chief of the Renal Division and Biomedical Engineering Division, Brigham and Women’s Hospital, Department of Medicine, Harvard Medical School, Boston, MA; and is affiliated with the Harvard-Massachusetts Institute of Technology, Division of Health Sciences and Technology, and the Harvard Stem Cell Institute, in Cambridge, MA.

Dr. Bonventre declares that he is co-inventor on KIM-1 patents that are assigned to Partners Healthcare. He is consultant to a number of companies in areas of patient kidney safety and development of new therapeutics including Sanofi, Thrasos, MediBeacon, Astellas, Mast, PTC, Keryx. He, or members of his family, own equity in Thrasos, Sentien, and MediBeacon.