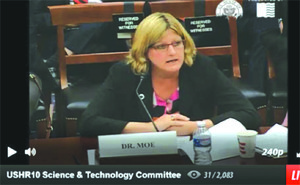 Dr. Moe voiced support for federal prize competitions as a mechanism to spur scientific and technological breakthroughs to improve kidney care and keep people off of dialysis, which, Dr. Moe testified, could result in significant savings to Medicare.

Inspired by the success of private and philanthropic sector prize competitions, the 2010 America COMPETES Act granted broad authority to federal agencies to use prizes to spur innovative solutions to tough problems who advance their core missions. For example, the U.S. Department of Energy offered $10 million in prizes to competition participants that developed “production-capable, super fuel-efficient vehicles” exceeding 100 miles per gallon, which incentivized more than 100 participants from around the globe.

Subcommittee on Research and Technology Chairman Rep. Larry Bucshon, MD, (R-IN) highlighted the benefits of a kidney prize competition: “As a cardiothoracic surgeon, prize competitions in medical research are of particular interest to me. Rising health care costs are burdening to American families. One example where cost containment is crucial affects the 450,000 Americans who suffer from end-stage renal disease (ESRD), commonly known as kidney failure.”

Despite the staggering public health and financial burden of kidney disease, total federal funding for kidney research is equivalent to less than 1 percent of what Medicare, and ultimately taxpayers, spend on the cost of care for Americans with kidney disease. Dr. Moe, a Professor of Medicine and Director of the Division of Nephrology in the Department of Medicine at the Indiana University School of Medicine, used these and other statistics to articulate why innovation in kidney care is so important.

“We must work together to innovate, to continually improve care, to help the millions of kidney patients become more productive citizens, and to contain the costs of the Medicare ESRD Program,” Dr. Moe said. “We must incentivize the development of therapies that give the ESRD Program greater value for the taxpayers’ contribution in terms of lower expenditures on care and better outcomes for patients.

“In addition to the traditional investigator-initiated model, prize competitions are another powerful lever that could spur development of a novel kidney replacement therapy that is more efficient and cost-effective than current therapies and helps patients feel better,” Dr. Moe continued. “I wish to thank the chairmen of the committee and subcommittee, Lamar Smith (R-TX) and Larry Bucshon (R-IN), for calling attention to the value of prizes, and for the opportunity to testify at the hearing.”

Dr. Moe was one of four public witnesses invited to testify at the April 9 subcommittee hearing on “Prizes to Spur Innovation and Technology Breakthrough.” The witnesses also included Christopher Frangione, vice president of prize development at XPRIZE; Narinder Singh, co-founder and chief strategy officer at Appirio and President of TopCoder; and Donnie Wilson, founder and chief executive officer of Elastec American Marine.

Video and a transcript of Dr. Moe’s testimony are available online at http://www.asn-online.org/policy/webdocs/page.aspx?code=congress.