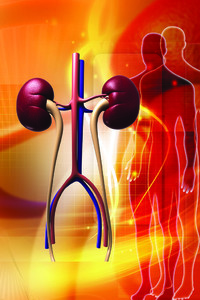 In 1995, Ratner, Kavoussi, and colleagues at Johns Hopkins University revolutionized live kidney donor transplantation through the development of the laparoscopic donor nephrectomy (1). Since then, the number of live donor transplants in the United States doubled, the number of live donors who are not biologically related to the recipient rose by more than fivefold, and the proportion of donor nephrectomies performed laparoscopically (or laparoscopically assisted) neared 100 percent. Today, approximately one-third of donor nephrectomies are performed using pure laparoscopic techniques, and approximately two-thirds are performed with the additional insertion of one of the surgeon’s hands into the abdomen.

In an effort to further minimize the already minimally invasive donor nephrectomy, several approaches have been recently explored. One concept reported by multiple centers, first among urologists excising diseased kidneys and later for the purposes of donation, is the single-port approach (2). Instead of separate ports for dissection and an additional (usually Pfannenstiel) incision for extraction of the kidney, a multiport device is placed through a peri-umbilical incision, and through this device are introduced all of the dissecting instruments. When the kidney is ready for extraction, it is removed through the same periumbilical incision after removing the multiport device. Obviously, the size of this incision is the Achilles heel of this approach, and the size can vary based on the size of the kidney and the size of the patient. In the setting of excising diseased kidneys, the kidney can be removed piecemeal and generally does not require an umbilical incision larger than the smallest possible dissecting multiport. However, in the setting of kidney donation, obviously the kidney must be removed intact without any compromise to its anatomic integrity, and this defines the length of the incision. While patients are reportedly pleased with the cosmetic results, demonstrating medical benefits has been more challenging in the early experience of this operation. It remains unclear if the risks associated with this technique, including the narrower window of laparoscopic instrument triangulation, are outweighed by its benefits.

We recently described a modified laparoscopic technique that maintains the traditional dissection ports (and hence the window of triangulation) but obviates the larger incision for extracting the kidney. Instead of using the traditional Pfannensteil extraction, our team, led by Robert Montgomery, removed the kidney transvaginally through a posterior colpotomy used to communicate with the abdomen (3). Patient outcomes were excellent, including a very short postsurgical hospital stay, minimal need for analgesia, and no apparent sequelae of the colpotomy; however, the total world experience with this procedure remains very small.

While surgical innovations are exciting and possibly compelling, they must be explored in the context of maximizing patient safety. Recent reports by Friedman, Ratner, and Peters of persistent use of Hem-o-Lok clips, despite clear evidence that these non-transfixing clips have on multiple occasions dislodged from the renal artery and led to donor deaths, are sobering reminders of the need to maintain patient safety above all else (4). Unfortunately, given the extreme rarity of major adverse events in the context of live kidney donation (5), it will likely require large experiences with given innovative surgical approaches before enough evidence can be accumulated to support (or call into question) their safety.