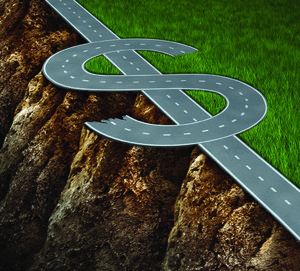 The worst outcomes of the “fiscal cliff” were averted for now with President Barack Obama’s signing into law the American Taxpayer Relief Act (ATRA) on January 2. In addition to permanently extending most of the 2001 and 2003 temporary tax cuts, the new law includes spending cuts to prevent a nearly $27 billion cut to Medicare physician reimbursement rates in 2013, and delays sequestration—automatic across-the-board spending cuts to federal discretionary spending and a 2 percent cut to other Medicare services initially scheduled to take effect January 2, 2013—for 2 months until March 2013.

The new March deadline enacted for dealing with sequestration also coincides with two other major deadlines. The U.S. government faces a possible government shutdown in March (when current appropriations for government expire) unless Congress approves appropriations for the remainder of Fiscal Year (FY) 2013. Moreover, the United States government will default on its debt soon unless Congress raises the “debt ceiling,” the legal limit of how much debt the United States can assume.

For patients with kidney disease and the nephrologists who treat them, the fiscal cliff deal Congress brokered was a mixed bag. To pay for the tax cut extension, Medicare physician payments in 2013 (see box, page 12), and other costly components of the deal, Congress had to identify savings from government operations to “offset” those costs.

A Government Accountability Office (GAO) report released in December 2012 described significant potential savings in the Medicare End-Stage Renal Disease (ESRD) Program and caught Congress’ attention. In a nutshell, the GAO report suggested that Medicare had been paying for more erythropoiesis-stimulating agents (ESAs) than were being administered. GAO concluded that by “rebasing” the base bundled payment rate, the Centers for Medicare & Medicaid Services (CMS) would reduce its ESA costs considerably. As described in the January issue of ASN Kidney News, many in the kidney community—including ASN—expressed concerns about a congressionally-mandated rebasing based on a report that focused on just one element of ESRD care.

Despite these concerns, when the Congressional Budget Office estimated that rebasing could save nearly $5 billion over 10 years, Congress moved forward with using it as an “offset” in the fiscal cliff deal. However, it is critical to note that this figure is an estimate only: Medicare is not legally mandated to actually achieve that level of savings. Thus far, some estimates floating around Washington have “guesstimated” rebasing could result in an approximately $10 reduction in the base rate (about 4 percent) of each payment.

While it remains to be seen how much savings CMS will ultimately wrest through rebasing, five key components that will affect the kidney community in the shorter term emerged from the dialysis-related provisions of the fiscal cliff deal. Specifically, the deal:

To summarize, nephrologists have seen Medicare physician payments sustained through 2013, but are not out of the woods yet, as the effects of ATRA on the patients they care for and on the dialysis units they see patients in remain murky. Moreover, it remains unclear what will happen to the Medicare budget during March negotiations that revisit sequestration and the slated 2 percent cut to Medicare. ASN plans to work with the kidney care community to ensure that Congress makes the best possible decisions for patients and the ESRD program in the coming months, recognizing the vulnerability of patients on dialysis and the cuts that the program has already sustained in recent years.

The Budget Control Act, signed during the summer of 2011, raised the federal debt ceiling and enacted $2.1 trillion in cuts to federal spending in several stages. Phase one cut $21 billion from several discretionary programs in the FY 2012 budget, and cuts budget levels for FY 2013–2021 by about $900 billion (Table I). 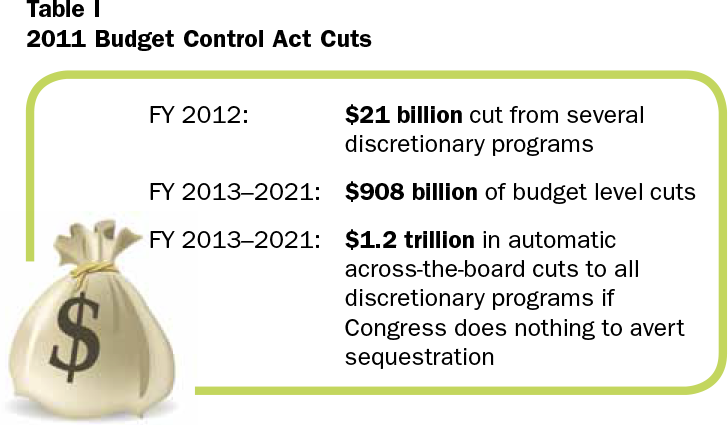 During phase two, Budget Control Act provisions empowered a Joint Committee on Deficit Reduction to present a plan for making the remaining $1.2 trillion in cuts, but the committee failed to come up with a plan. That failure would have triggered $1.2 trillion in automatic across-the-board cuts to all federal discretionary spending beginning January 2, 2013. But Congress and the president delayed sequestration by 2 months, thereby delaying the “fiscal cliff” to March 2013.

In response to the threat of sequestration, ASN in July joined a new coalition of 3000 national, state, and local organizations—including other medical specialty societies and research organizations—and has been advocating for a balanced approach to deficit reduction that does not rely on further cuts to non-defense discretionary (NDD) spending, which includes funding for medical research, transportation, education, public safety, public health, and other important government services.

ASN’s collaborations with the NDD community include:

These activities built support for NDD programs that in part helped delay the implementation of sequestration until March 1, 2013, and give Congress and the president more time to avert it. Otherwise, $1.2 trillion in cuts will come on top of the more than $900 billion already cut. That would equate to a cut of about 6.5 percent for federal medical research and other NDD programs in FY 2013.

The current outlook for a deal to avert sequestration in March is grim. Congress has thus far proven incapable of agreeing on how to apply the remaining $1.2 trillion of cuts mandated by the 2011 Budget Control Act, and Senate Minority Leader Mitch McConnell (R-KY) says additional revenue as an offset is off the table. It is hard to imagine how a deal can come together to avert sequestration without revenue offsets or a complete repeal. And having delayed sequestration once, it is unlikely Congress would kick the can down the road again.

“ASN shares concerns about the growing national debt and supports responsible federal deficit reduction measures. But federal NDD programs like medical research are not the main drivers of our nation’s debt and have already done a fair share for deficit reduction,” said ASN Research Advocacy Committee Chair John R. Sedor, MD. “I urge everyone to join ASN’s campaign in support of medical research and other NDD programs. Visit http://www.asn-online.org/policy/ to learn how.”