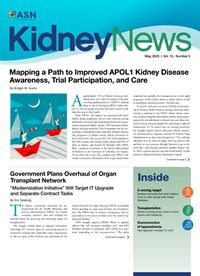 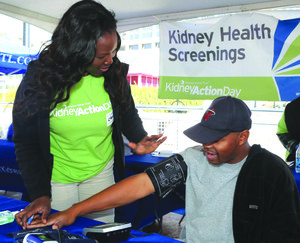 For the first time, ASN partnered with the American Kidney Fund (AKF) to kick off Kidney Week with a free kidney health screening and public awareness event. Kidney Action Day was held at downtown Atlanta’s Underground and featured fitness, nutrition, and health education in addition to screenings and advice from volunteer health professionals from local institutions including Emory University School of Medicine.

Quickly expanding since its 2010 launch in Chicago, Kidney Action Day has helped raise the profile of kidney disease while giving participants important knowledge to improve and preserve their kidney health.

“Kidney Action Day is our signature outreach event,” said LaVarne Burton, AKF’s president and CEO. “By arming people at risk for kidney disease with the tools they need to fight this devastating disease, AKF expanded our mission in a way that fights kidney disease on both fronts—helping people who have reached kidney failure and helping those who may be in a position to prevent kidney failure. Since an estimated 9 out of 10 people with early kidney disease don’t even know they have it, screening and health education are a critical component of our efforts.

ASN Past-President Bruce A. Molitoris, MD, FASN, highlighted the event in his Kidney Week presidential address while emphasizing the importance of screening for kidney disease. “If detected early in its progression, kidney disease can be slowed,” said Molitoris, “which is why regular screening and early intervention by a nephrologist is so important to stemming the epidemic of kidney disease in the United States.”

During the 4-hour event, 248 people underwent screening for kidney disease risk factors and received valuable health advice on preventing and managing kidney disease, the 8th leading cause of death in the United States. After having their glucose and blood pressure levels checked, participants were offered the chance to speak with a health professional to discuss the results and offer advice for next steps (Fig. 1).

Among those volunteering to screen and counsel participants were pre-med, medical, and nursing students from schools across Atlanta. In light of declining interest in pursuing nephrology careers, the opportunity to interact with people and help improve their health could give students a different perspective of the specialty.

“A lot of times medical students only think of nephrology as acid-base and equations, but there is a lot more to nephrology and we hope with Kidney Action Day and Kidney MAPS we can show them community outreach and also teach them about clinical nephrology at the same time,” said Jason Cobb, MD, of the Emory University School of Medicine.

Kidney Action Day fills an unmet need for those individuals who may be at increased risk for CKD but who may also have limited or no access to health care. “Kidney Action Day is an opportunity for people in at-risk communities to learn about their risk and walk away with information about how to live a healthier lifestyle,” said AKF’s Burton. “We hold Kidney Action Days in cities where rates of kidney disease are above the national average. Often, there is a direct relationship between the high rates of kidney disease and the percentage of uninsured in the population, along with many other factors such as the presence of food deserts.”

At Kidney Action Day in Atlanta, Cobb noted a number of participants were screened and identified with having abnormal GFR, abnormal blood pressure, and glucose readings. “Those participants were identified and educated to follow up with clinicians at local safety-net clinics and hospitals. Some of them were not even aware of the options for them without insurance, Cobb said.”

“Beyond providing a valuable health service, Kidney Action Day allows ASN to give back to the Atlanta community, which plays an important role in Kidney Week’s success,” Molitoris said.

The event was hosted by Rep. John Lewis (D-GA), a member of the Congressional Kidney Caucus. “All of this is made possible with support from our sponsors. In 2013, Kidney Action Day was nationally sponsored by American Renal Associates,” Burton added.