ASN President-Elect Bruce A. Molitoris, MD, FASN, and ASN Research Advocacy Committee (RAC) members (see Table 1) participated in the society’s first-ever “NIH Advocacy Day” on Wednesday, June 20. The goal of NIH Advocacy Day was to advance the profile of kidney disease research at the National Institutes of Health (NIH) beyond NIDDK and encourage other institutes to dedicate resources to studying kidney disease where relevant to their mission.

NIH’s 27 institutes and centers (ICs) are engaged in global health research and research training activities. Most kidney disease research is funded by the National Institute of Diabetes and Digestive and Kidney Diseases (NIDDK). While ASN has had a longstanding relationship with NIDDK, other institutes also support research conducted by ASN members. ASN has had a limited relationship with other ICs in the past. RAC members met with senior staff at NIDDK and four other ICs: the Center for Scientific Review (CSR), National Institute on Aging (NIA), National Institute of Minority Health and Health Disparities (NIMHD), and National Heart, Lung and Blood Institute (NHLBI) (Table 2). 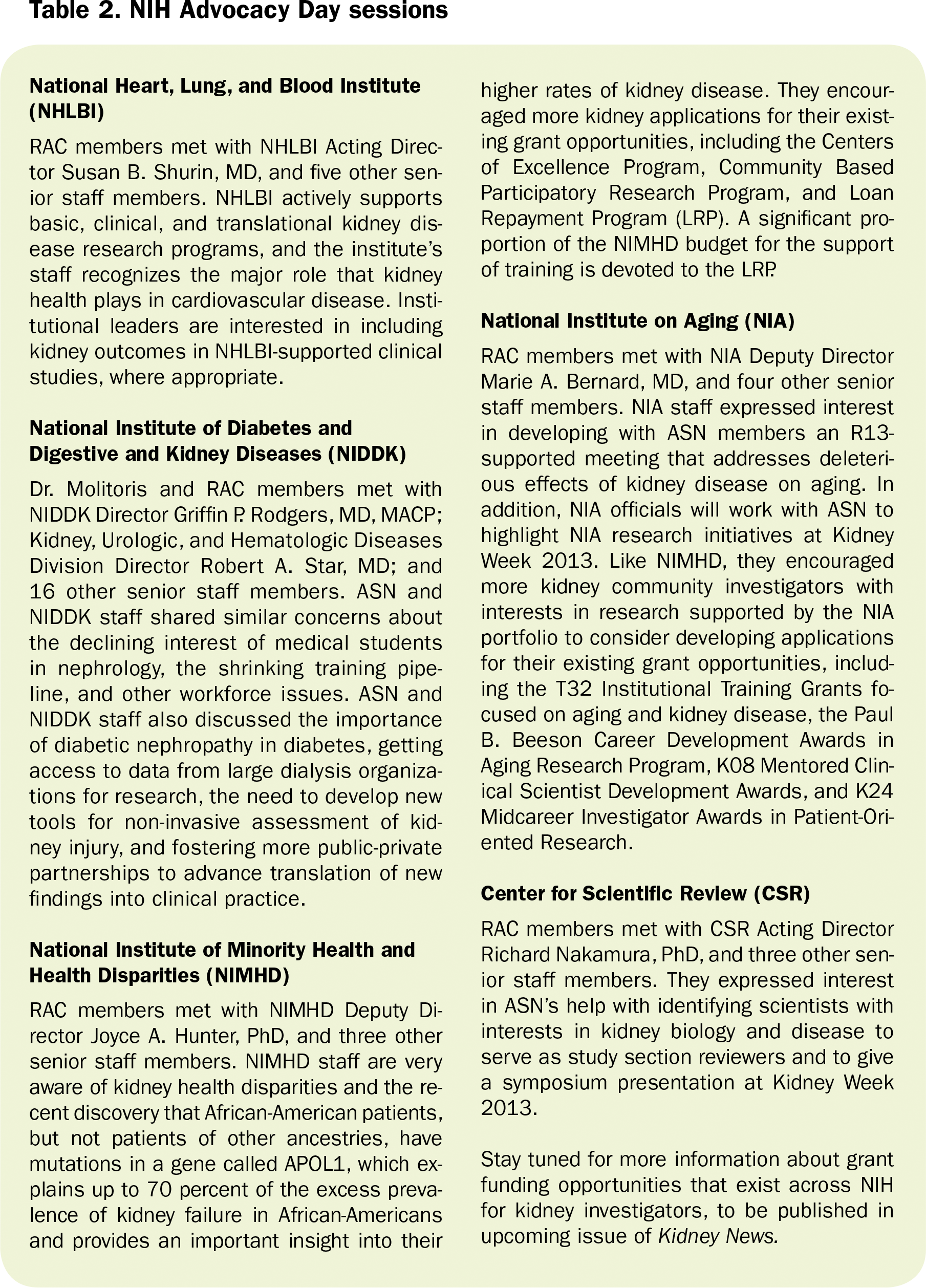 Several overarching themes emerged from the meetings: 1) grant funding opportunities are available that have not been optimally pursued by kidney community investigators; and 2) NIH needs our support in opposing further decreases in federal non-defense discretionary (NDD) spending, the portion of the federal budget that supports biomedical research.

Since the doubling of NIH’s budget ended in 2002, NIH’s budget has essentially been undoubled after adjusting for biomedical research inflation. As a result, research budgets have been reduced, programs have been eliminated and application success rates have fallen from 21 percent in 2010 to 18 percent in 2011.

During meetings with congressional offices on ASN Hill Day on April 26, and at the ASN– co-sponsored “Kidney Disease Research: From Concept to Cure” congressional briefing on June 19, participants stressed the importance and value of NIH-funded research, especially kidney research, and ASN has joined the NDD community in calling for a balanced approach to deficit reduction.

The society shared this information with NIH and agreed to continue its efforts to advocate against further budget cuts that do not include additional revenues.