Griffin P. Rodgers, MD, MACP, director, National Institute of Diabetes and Digestive and Kidney Diseases (NIDDK) said that more than 80 percent of NIH funding supports research around the country and described past NIDDK research that has led to improvements in patient care. 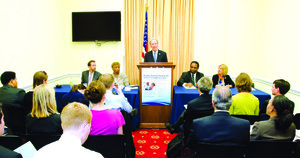 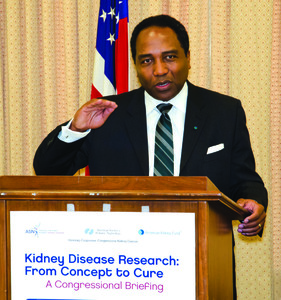 On Tuesday, June 19, ASN co-sponsored a congressional briefing on the importance of kidney disease research with the American Society of Pediatric Nephrology (ASPN), the American Kidney Fund (AKF), and honorary co-sponsor, the Congressional Kidney Caucus.

ASN Research Advocacy Committee Chair John R. Sedor, MD, moderated the panel, which attracted a standing room only crowd on Capitol Hill. Noting that costs associated with the spectrum of care provided for patients with kidney disease make up 1 percent of the entire federal budget, Dr. Sedor said there will be no cures without research.

Beyond serving as a powerful force in the war on disease, research drives U.S. economic growth. Dr. Rodgers added that more than 80 percent of NIH funding supports research around the country and described past NIDDK research that has led to improvements in patient care. Today kidney disease can be detected earlier, and NIDDK-supported research facilitated the development of new drugs to better control blood pressure, among other advances.

Dr. Shurin discussed the kidney-heart connection, pointing out that kidney and cardiovascular diseases are interrelated. She described more than 10 NHLBI-supported epidemiological studies and clinical trials related to both kidney and heart disease that are yielding promising research, including the Systolic Blood Pressure Intervention Trial (SPRINT), Chronic Kidney Disease in Children Prospective Cohort Study (CKiD), and Multi-Ethnic Study of Atherosclerosis (MESA).

Discussing the importance of research from the perspective of kidney disease patients, AKF’s LaVarne Burton said investigators need NIH support that can lead to innovations and discoveries to improve patient outcomes. Ms. Burton also remarked that kidney disease can be prevented. AKF’s Pair Up campaign empowers women to partner with a friend or loved one to attend free events in their communities in order to learn about their risks, get tested for kidney disease, and ask their doctors for advice. She also emphasized the need for research to drive and inform policy.

The final speaker, Dr. Schnaper, addressed the unique differences between pediatric and adult kidney disease populations. Children and adolescents suffer from a different spectrum of kidney diseases than adults and encounter problems related to the disruption of normal growth and development. In the absence of more effective treatments and cures, he said, they are doomed to a lifetime of distress and costly care.

The message is clear: NIH-funded research is important for quality care of kidney disease patients, for prevention or cure of kidney disease and for economic development. Beyond jobs lost, if NIH funding is cut, our nation could lose a whole generation of research and discoveries that could save lives and drive down healthcare costs, Dr. Shurin said.