HHS and its agencies 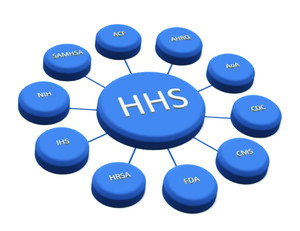 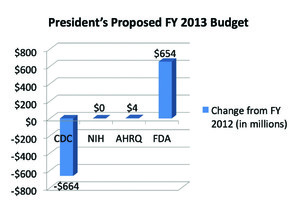 While the National Institutes of Health (NIH) is still sorting out how to divvy up its funding for fiscal year (FY) 2012, Congress is knee deep in the budget process for FY 2013. In February, the Obama administration released the president’s budget for 2013. It includes $71.7 billion for the U.S. Department of Health and Human Services (HHS), an 8.5 percent cut from FY 2012. To put that number in perspective, in 2010, HHS’s budget was $84.4 billion. HHS’s budget includes funding for many different agencies, including the Centers for Disease Control and Prevention (CDC), the Centers for Medicare & Medicaid Services (CMS), the U.S. Food and Drug Administration (FDA), and of particular interest to investigators, the Agency for Healthcare Research and Quality (AHRQ) and NIH (Figure 1).

Drilling down, HHS’s budget includes $408.8 million for AHRQ, an increase of $3.7 million over FY 2012 (Figure 2). On the other hand, HHS’s budget for NIH is flat at $30.9 billion, and the National Institute of Diabetes and Digestive and Kidney Diseases’ (NIDDK) budget was slightly reduced to $1.94 billion, a decrease of $2.80 million from 2012. That compares with budget increases for the National Heart Lung and Blood Institute and National Institute on Aging of $709,000 and $522,000, respectively.

However, Congress still has to have its say. The members of Congress ultimately hold the purse strings, and there is considerable pressure to lower the discretionary spending caps imposed by the Budget Control Act (BCA) last summer. The BCA also forces Congress to find an additional $1.2 trillion in savings by either raising revenues, making additional spending cuts, or a combination of the two. If Congress cannot agree to a plan that achieves that $1.2 trillion savings level (or to repeal the BCA) before January 2, 2013, then across-the-board cuts (also known as sequestration) will automatically go into effect for most discretionary federal spending programs in 2013, including HHS.

The impact on medical research would likely be devastating. NIH Director Francis S. Collins, MD, PhD, estimates that sequestration would result in an 8 percent cut to NIH, translating into reducing the number of grants it funds by 2300. Success rates would similarly drop dramatically.

ASN is working to ensure that Congress strengthens funding for medical research—and specifically kidney disease research—in collaboration with the American Society of Pediatric Nephrology (ASPN) and the Congressional Kidney Caucus, which includes Chairman Rep. Jim McDermott, MD (D-WA) and Vice Chair Rep. Jesse Jackson, Jr. (D-IL). ASN and ASPN are grateful for the support of the Congressional Kidney Caucus, which submitted language highlighting the importance of kidney disease research across the NIH and directed at patients of all ages, to be included in the report the House Appropriations Committee submits to the full House of Representatives. (Appropriations committees write the legislation that allocates federal funds to agencies, including NIH.) This report is vitally important, as it explains to Congress the reasons for including the spending proposals in appropriations bills. In addition, ASN and ASPN worked with the caucus to include a specific funding recommendation for the NIDDK budget—the first time a specific budget level has been supported by the kidney community. This “programmatic request” for NIDDK for FY 2013 was $2.03 billion, or 4.5 percent more than the president’s budget requested. This level of funding is critical to sustain the inroads that have been made in kidney research and to protect the pipeline for promising new investigators.

To support this request, ASN collaborated with ASPN to send a letter in support of kidney disease research and robust NIDDK funding to both the House and Senate Appropriations Committees. It was signed by numerous other members of the kidney community, representing patients, providers, and industry.

ASN has taken a number of other steps such as:

ASN is also organizing the second annual ASN Hill Day on April 26, 2012. ASN Council, Board of Advisors, and Public Policy Board members will speak with members of Congress and their staff about the importance of supporting innovative kidney disease research that will improve patient care, cut costs, and preserve the investigator pipeline. Stay tuned for more details.