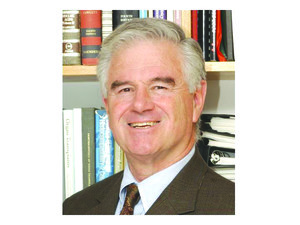 “Tolerance and Kidney Transplantation” is the title of the state-of-the-art lecture to be delivered on Thursday, Nov. 1. Transplant tolerance researcher David H. Sachs, MD, is the speaker.

Dr. Sachs is director of the Transplantation Biology Research Center at Massachusetts General Hospital and the Paul S. Russell/Warner-Lambert Professor of Surgery (Immunology) at Harvard Medical School in Boston.

Dr. Sachs has published more than 700 articles in scientific journals. His research achievements include the development of monoclonal antibodies to major histocompatibility complex antigens, development of a unique large animal model for transplantation using miniature swine, use of mixed marrow reconstitution as a means of inducing specific tolerance, and studies of specific transplantation tolerance to allografts and xenografts in murine, swine, and primate models.

Dr. Sachs received his MD from Harvard Medical School and then was a surgical resident at the Massachusetts General Hospital from 1968 to 1970. He moved to the National Institutes of Health in Bethesda, MD, where he developed a major program in transplantation research. He became chief of the immunology branch of the National Cancer Institute in 1982, where he stayed until returning to Harvard in 1991.

He is one of the three North American editors of Transplantation and was the founding editor of Xenotransplantation. He has served the Transplantation Society as councilor and vice president for several terms. He was elected to the Institute of Medicine of the National Academy of Sciences in 1996. He has received the Jean Borel Award in Transplantation, the ASTP/Novartis Established Investigator Award, the Medical Foundation Award, the Roche AST Distinguished Achievement Award, and the Martin Prize for Excellence in Clinical Research. He holds an honorary degree from the University of Nantes, France.