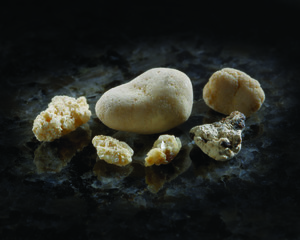 One might think that rare diseases are rare. But if one were to combine all the rare diseases that affect Americans, the overall prevalence is not rare at all. In fact, 30 million Americans, or roughly 10 percent of the population, are affected by a rare disease. Many of these disorders are severe and lead to a significant effect on people’s lives and life expectancy. To bring new and concentrated attention to these often poorly studied disorders, 19 collaborative consortia were funded in 2009 by the Rare Disease Clinical Research Network, a project jointly sponsored by the National Institutes of Health and the Office of Rare Disease Research (see http://rarediseasesnetwork.epi.usf.edu). These consortia span a fascinating range, including diseases of the mitochondria, lysosomal storage diseases, and vasculitis.

The Rare Kidney Stone Consortium (RKSC) (see www.rarekidneystones.org) is making progress in the management of four rare genetic kidney stones that are often more severe than the usual stones that affect more than 10 percent of Americans. The consortium is trying to highlight these rare stones and make sure that they are not missed by physicians who may not be aware of diseases associated with them. When the diseases are recognized, they are often not managed optimally because of physicians’ lack of experience. The result is more frequent recurrence of stones, more urologic procedures, and a higher prevalence of chronic kidney disease.

The principal investigator of the RKSC is Dawn Milliner, MD, a pediatric nephrologist at the Mayo Clinic in Rochester, MN, and an expert on primary hyperoxaluria. The disease is caused by a mutation of a liver enzyme. Although calcium oxalate stones are common in the general population, patients with primary hyperoxaluria have more frequent stones, and calcium oxalate crystals accumulate and damage the kidneys. If kidney function worsens, calcium oxalate can accumulate and damage the heart, eyes, and other organs. The ultimate treatment may be liver transplantation to replace the abnormal enzyme. Milliner and her group have established an international registry to determine which patients do well and which do not, while pioneering new treatments to safely eliminate oxalate from the blood and urine (1).

A second disorder is studied by our collaborators in Reykjavik, Iceland, headed by Vidar Edvardsson, MD. They are investigating deficiency of adenine phosphoribosyltransferase, a cause of dihydroxyadenine stones. Because these stones are very rare in the United States, we suspect that they are often missed and misidentified. Edvardsson is characterizing the Icelandic population and looking for evidence that Americans with this disorder are being incorrectly diagnosed (2).

The third disorder, Dent disease, is most often caused by a mutation in a chloride channel in the kidney. Too much calcium in the urine results in calcium stones. Many patients with the disease are seen by nephrologists who fail to order appropriate tests. The patients are being characterized by John Lieske, MD, at the Mayo Clinic and Lada Beara-Lasic, MD, at the New York University (NYU) School of Medicine.

The fourth disorder is cystinuria, a genetic condition in which the kidneys fail to reabsorb filtered cysteine. This amino acid is poorly soluble, appears in the urine in large amounts, and precipitates to form large, recurrent stones. Cystinuria is the most common of the four disorders, affecting as many as 10,000 Americans. I am the principal investigator of this project at the NYU Langone Medical Center (3). Some of my patients helped found the International Cystinuria Foundation (www.cystinuria.org), an organization devoted to providing educational support to people with cystinuria. We also are connected to the Cystinuria Support Network, an e-mail group that allows affected people to connect to one another for support and advice.

Last year, Michael Ward, PhD, of the department of chemistry at NYU, identified new inhibitors of cystine crystallization (4). One potential drug, cystine dimethylester, significantly slowed cystine crystal growth. A mouse model of cystinuria, the result of knocking out one of the mouse genes corresponding to one of the responsible human genes, was developed by Amrik Sahota, PhD, and Jay Tischfield, PhD, at the University of Medicine and Dentistry of New Jersey. The model is now being used to determine whether cystine dimethylester works to prevent stones not only in vitro, as Ward’s work demonstrated, but in vivo as well. If it is shown to be effective and safe, we hope to proceed with studies in humans in the coming years.

The RKSC has been a successful consortium, developing registries, pioneering clinical research, and providing some hope to people affected by these rare and debilitating cases of kidney stones.

The RKSC, a member of the Rare Disease Clinical Research Network, is funded by the National Institute of Diabetes and Digestive and Kidney Diseases and the Office of Rare Disease Research: Grant 1U54DK083908-02.