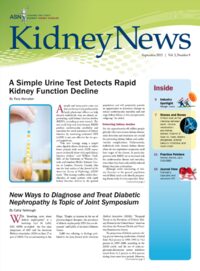 Plasma levels of PPi are reduced in hemodialysis patients and correlate inversely with arterial calcification. This may be related to another key enzyme in extracellular PPi metabolism, tissue-nonspecific alkaline phosphatase (TNAP), which hydrolyzes PPi and induces arterial calcification when genetically overexpressed in vascular smooth muscle in vitro and in vivo. The activity of TNAP is increased in vessels from uremic rats, suggesting a pathologic role. Currently, little is known about the regulation of TNAP in vascular smooth muscle cells and why it is upregulated in renal failure.

Two other endogenous inhibitors of arterial calcification, matrix gla protein and osteopontin, also appear to act through direct inhibition of hydroxyapatite formation but probably do not play a primary pathogenic role in the vascular calcification of CKD, inasmuch as both are upregulated in vessels from uremic rats. Matrix gla protein requires vitamin K–dependent γ-carboxylation. Deficiency—either genetic or related to warfarin use—leads to vascular calcification in animals and humans. Osteopontin is, molecule for molecule, the most potent known inhibitor of hydroxyapatite formation, but deficiency does not lead to vascular calcification unless coupled with deficiency of another inhibitor. These proteins have limited therapeutic potential because matrix gla protein is extremely insoluble, and osteopontin has other inflammatory actions. However, vitamin K could be of benefit because patients with advanced renal failure may have vitamin K deficiency. Magnesium also inhibits hydroxyapatite formation and accounts for most of the inhibitory activity in plasma, but its therapeutic potential has not been explored.

Thiosulfate is another compound that can inhibit vascular calcification in vivo and in vitro and is often used to treat calciphylaxis. Although it is present endogenously, the levels are far below those required to inhibit calcification. It is widely assumed that thiosulfate acts by chelating calcium, but recent data indicate that its interaction with calcium ions is extremely weak and that there is no effect on hydroxyapatite formation or dissolution. Thus, its mechanism of action remains to be determined.

It is clear that the arterial wall has a propensity to calcify, even in the absence of altered mineral metabolism, and that endogenous inhibitors, particularly pyrophosphate, are required to prevent this. Thus, arterial calcification must be seen as a failure of these endogenous mechanisms. Although these inhibitors can be the basis for future preventive and therapeutic strategies, their unwanted effects on skeletal mineralization must also be considered.

W. Charles O’Neill, MD, is affiliated with the renal division at the Emory University School of Medicine. He is an inventor of a patent owned by Emory University related to compounds discussed in this article.