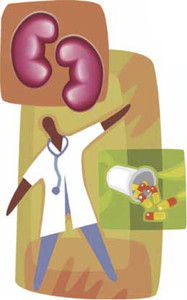 Bardoxolone Reverses Kidney Function Decline in CKD Out to One Year

Speaking at the 48th Congress of the European Renal Association – European Dialysis and Transplant Association (ERA-EDTA) in Prague, David Warnock, MD, professor of medicine at the University of Alabama at Birmingham, told the congress that these latest results suggest that the drug may be useful for treating CKD, although larger confirmatory trials are still needed. The findings were published online by the New England Journal of Medicine on June 24.

The phase 2b, randomized, double-blind, placebo-controlled Bardoxolone Methyl Treatment: Renal Function in CKD/Type 2 Diabetes (BEAM) trial (NCT00811889) assigned 227 adults with type 2 diabetes and an eGFR of 20–45 mL/min/1.73 m2 equally to 1of 4 groups: bardoxolone at a dose of 25 mg, 75 mg, or 150 mg once daily, or to placebo. All patients received the standard of care of a renin-angiotensin-aldosterone system blocker unless they could not tolerate them. The primary endpoint was the change in eGFR from baseline with bardoxolone compared to placebo at 24 weeks, and the secondary endpoint of the change at 52 weeks was reported at the ERA-EDTA meeting.

Baseline variables for the four treatment groups were similar: a mean age of 67 years, a time from diabetes diagnosis of approximately 18 years, and a body mass index of 35.0–36.3 kg/m2. The mean eGFR was 32.4 ± 6.9 mL/min/1.73 m2. Blood glucose levels and blood pressure were generally well controlled.

Durable improvements in eGFR at 52 weeks

The eGFR increased within four weeks of starting bardoxolone, reached a peak at 12 weeks, and was relatively stable through 52 weeks, Warnock showed. At 24 weeks, the eGFRs in all the bardoxolone groups were significantly higher than in the placebo arm (p<0.001). At 52 weeks, the changes in eGFR continued to be superior to placebo, which showed no significant changes from baseline at either time point. The 52-week increases in eGFR were 5.8, 10.5, and 9.3 mL/min/1.73 m2 for the 25 mg, 75 mg, and 150 mg doses, respectively (p ≤ 0.002 vs. placebo).

At 24 weeks 13 percent of patients in the placebo arm had a reduction in eGFR of at least 25 percent, whereas only 2 percent in the combined bardoxolone groups lost that amount of kidney function (p=0.05).

Even four weeks after the drug was stopped, the bardoxolone groups still showed increases in eGFR although at a lower level than when they were on the drug. Warnock noted that the persistent effect, especially in patients with the greatest increases in eGFR, suggests that the drug did not merely act by causing hyperfiltration and did not appear to cause any kidney injury over the 52 weeks of the trial. Blood urea nitrogen, serum phosphorus, uric acid, and magnesium decreased at both time points in the bardoxolone groups compared with placebo.

The majority of adverse events occurred in the first 24 weeks and were generally mild and dose related. Muscle spasm was the most common one, with hypomagnesemia, mild increases in aminotransferase levels, and gastrointestinal effects occurring less frequently.

Warnock told ASN Kidney News that the study was successful in achieving its primary goal of demonstrating a dose of bardoxolone for future trials and that the adverse events observed were acceptable when bardoxolone was added to the current standard of care therapy.

There remains some concern among nephrologists that increasing the GFR may have some negative consequences since previous studies have suggested that a decrease in GFR may slow the progression of kidney disease in the long term. Further studies will need to assess the effects of the drug in a larger population, including patients with CKD but who do not have diabetes.

Reata Pharmaceuticals and Abbott are starting the Bardoxolone methyl EvAluation in patients with Chronic kidney disease and type 2 diabetes: the Occurrence of renal eveNts (BEACON) trial, a 1600-patient multinational study to assess the impact of bardoxolone methyl on the time to the important clinical endpoints of cardiovascular death or time to progression to dialysis.

For more information, see the Q and A in Kidney News’ dynamic edition.