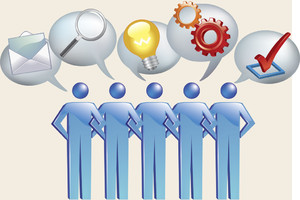 The recent introduction of the Centers for Medicare and Medicaid Services (CMS) End-Stage Renal Disease Prospective Payment System and the subsequent discussions about potential quality measures on how to monitor it have once again highlighted a sore point for many in the nephrology community: the evidence supporting most of our practice is weak, to say the least. Large randomized trials that have shaped most of the care in the general population have systematically excluded patients with advanced chronic kidney disease (CKD), including those requiring dialysis. Many of the trials that were specifically conducted in patients with advanced CKD or ESRD were inconclusive, or used surrogate endpoints that were controversial or turned out to be outright invalid. As a result, clinical equipoise exists, which favors the development of predominantly opinion-based guidelines and permits considerable variability in clinical practice. Such variability, however, is usually associated with suboptimal patient outcomes.

There are several definitions of what constitutes comparative effectiveness research (CER). Most would agree that CER seeks to compare competing strategies to detect, treat, or manage a certain condition in a defined set of patients. A typical approach would be to compare two or more types of treatment, such as different drugs, for the same disease. However, a comparison may also be made among medications and procedures (e.g., surgery) for a given condition.

Although purists argue that such comparisons should include only interventions that have previously been proved to be efficacious (superior compared with placebo, or noninferior compared with another treatment that had been superior to placebo), most others would drop that requirement. In its extreme form, the use of a specific treatment could also be compared with its nonuse (e.g., watchful waiting). Implicitly, CER is not just about comparing clinical effectiveness but also has a strong focus on comparative safety among clinical strategies for certain conditions. It is recognized that there is no “one size fits all” approach to medicine. The benefits and risks of certain treatments vary among populations, such as those defined by age, gender, race, or the presence of certain comorbidities. Thus, the key question CER seeks to answer is which treatment works best, for whom, and under what circumstances.

Comparative effectiveness research has gained considerable traction in many medical disciplines, and large resources have been directed toward CER through funds appropriated by the American Recovery and Reinvestment Act of 2009. Unfortunately, most of this research bounty, predominantly managed and allocated by the Agency for Healthcare Research and Quality (AHRQ) through its Effective Health Care program, has bypassed nephrology. Among the 100 initial research priorities for CER compiled by the 2009 Institute of Medicine Report, only one is directly pertinent to our field: the comparative effectiveness of competing dialysis modalities.

Clearly, there are numerous CER questions to be posed in the context of nephrology, but kidney disease has not been one of the AHRQ Effective Health Care priority conditions in the past. Through its Developing Evidence to Inform Decisions about Effectiveness Network, the AHRQ has awarded two large CER task orders, focusing on studies in the ESRD population of intravenous iron treatment strategies, blood pressure agents, and timing of dialysis initiation.

Recognizing the need to improve the evidence available to guide practice in nephrology, the ASN has launched an initiative focusing on CER. In 2010, a specific Comparative Effectiveness Research Task Force was convened under the auspices of the ASN Public Policy Board (Table 1). The main goals of this task force are to build awareness among the nephrology community about CER, to educate researchers about appropriate designs and analytic techniques, and to lobby key stakeholders, especially funders of CER, about the need for funding support for high-quality CER in nephrology. 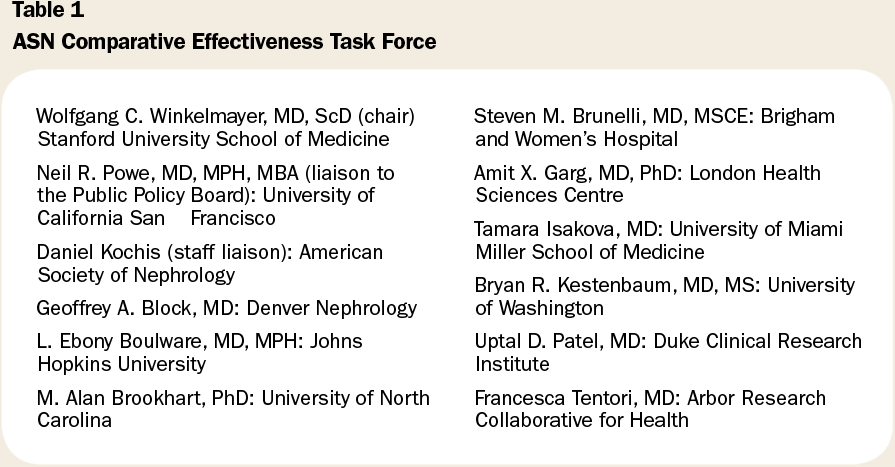 Some of the activities have already begun. The ASN offered a well-attended and very successful two-day course on CER at ASN Renal Week 2010 in Denver. In addition, the ASN has also begun to solicit ideas from several of the ASN advisory groups about potential comparative effectiveness topics. We will soon expand our reach to the whole ASN community, and we hope to compile a priority list of CER projects, which will then be presented to key funders of such research in nephrology and other key decision makers and constituents. ASN hopes to accelerate the generation of high-quality evidence so that we can treat our vulnerable patient population using the best strategies possible and thus improve patient outcomes.