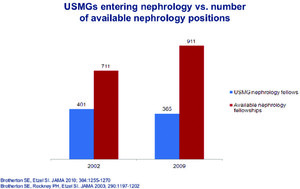 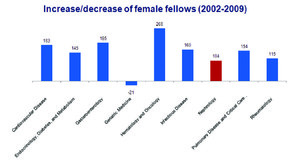 The Nephrology Workforce Crisis: By the Numbers

Of all internal medicine specialties, nephrology and geriatric medicine are now the least competitive. Correspondingly, in a recent survey of third- and fourth-year students from five medical schools, more than three in four respondents conveyed that renal pathophysiology courses were too complex, lacked relevance, or simply failed to stimulate interest (Figure 2.3).

The field of nephrology has benefitted substantially from the contributions of international medical graduates (IMGs) who enter fellowship programs in this country. Since 2002, nephrology fellowship training program directors have increasingly depended on IMGs to fill fellowship positions. In 2009, 497 nephrology fellows were IMGs, up from 271 in 2002. Because 40 percent of its physicians are IMGs, compared with an estimated 25 percent of all physicians in the United States, nephrology is more dependent on IMGs than any other specialty except geriatric medicine. So, if highly qualified IMGs are still interested in nephrology, then why is declining interest among USMGs a matter of concern?

Owing to new and more stringent legal barriers to immigration, the future of IMGs in the United States is increasingly uncertain. From 1996 to 2008, the number of IMGs obtaining J-1 visas declined from 11,471 to 6561 (3). Visa requirements and application processes for IMGs became more arduous after September 11, 2001. Meanwhile, the economy in this country increasingly necessitates a two-income household, meaning that most spouses of IMGs must also secure work visas.

As countries such as China and India create greater opportunities in medicine, more IMGs may remain in their countries of origin or return after they complete graduate medical education in this country. Perhaps as a sign of future trends, the number of graduates of Canadian medical schools training in residency and fellowship programs in the United States dropped from 418 in 2002 to 273 in 2009.

A closer look at the USMG nephrology numbers continues to reveal a grim picture. Although the number of female nephrology fellows rose from 229 in 2002 to 333 in 2009, this growth represented the lowest proportional increase for any internal medicine specialty except geriatric medicine (Figure 2.4). During that time, all other internal medicine specialties saw, on average, a 67.8 percent increase in female fellows (ranging from 54.8 percent to 86.7 percent). Nephrology attracted significantly fewer, with just 45.4 percent more female fellows in 2009 than in 2002.

As the need for internal medicine trainees grows and the number of IMGs continues to taper, nephrology training programs will need more USMGs to compete for training positions. It is imperative to stimulate USMG interest—particularly among women and minorities—in nephrology as soon as possible.