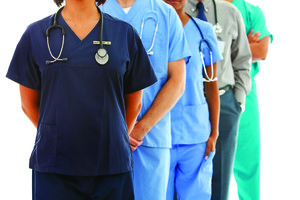 What If the Projections Are Wrong? A Contrarian Position on the Workforce Crisis

What if this prediction is wrong and the United States actually has an oversupply of physicians—including nephrologists—by the end of the decade? What if the physician workforce projections continue their 20-year boom-to-bust cycle?

“I worry that the workforce numbers will be impacted by the increasing use of other providers—particularly nurse practitioners and physician assistants (PAs) in kidney care—the decreasing reimbursement for all providers, and the growing trend toward nonpayment of internal medicine care provided by nephrologists to dialysis patients,” observes Sharon Adler, MD, FASN, chief of the division of nephrology and hypertension at the Harbor-UCLA Medical Center. “Together, these forces may result in less patient care provided by nephrologists.”

Neither of these options seems likely, however, because the number of accredited training programs has decreased (from 149 in 1986 to 141 in 2009) (4, 5), the Accreditation Council for Graduate Medical Education is unexcited about the prospect of even larger fellowship programs (the average number of nephrology fellows per accredited program has increased from 1.6 to 6.4 since 1986), and the Balanced Budget Act of 1997 capped the number of residency and fellowship positions funded by the federal government.

Because of this cap and the long educational continuum (a minimum of seven years), the number of new physicians has remained relatively flat during the past decade. At the same time, the number of other providers—particularly nurses and PAs—has increased more dramatically. Interestingly, nephrology is one of only a few PA specialties. The only others are cardiovascular/thoracic surgery, emergency medicine, orthopedic surgery, and psychiatry.

In a recent report, the Institute of Medicine asserts that “transforming the health care system and the practice environment will require a balance of skills and perspectives among physicians, nurses, and other health care professionals” (6). To help accomplish this goal, the Institute of Medicine recommends that “regulatory and institutional obstacles—including limits on nurses’ scope of practice—should be removed so that the health system can reap the full benefit of nurses’ training, skills, and knowledge in patient care.”

The Medicare End-Stage Renal Disease (ESRD) Program instituted bundled payments this year and will start the first pay-for-performance system in 2012. “Bundled payments could increase financial pressures on some dialysis providers, and instituting patient care protocols is one way that facilities may seek to control costs,” explains Thomas H. Hostetter, MD, who chairs the ASN Public Policy Board. “Beginning in 2012, the pay-for-performance program will penalize providers when patients’ hemoglobin and urea reduction ratio values vary from a relatively narrow range.”

Although Hostetter anticipates a shortage of nephrologists, he is concerned that the changes to the Medicare ESRD Program could create incentives for increasing standardization of dialysis care, potentially diminishing the need for the expertise of an autonomous nephrologist.

“As the bundled payment system and the pay-for-performance program push providers to administer more uniform care, the role of the nephrologist as an independent clinical decision-maker in the dialysis unit is arguably compromised,” he says.

The actual impact of these changes on the Medicare program is unclear, but current incentives emphasize reimbursement for dialysis patients rather than prevention of kidney disease, including ESRD. “The amount of funding for medical research, including federal and corporate sources, going toward prevention and progression of kidney disease research is vastly disproportional to the health care dollars spent on kidney disease and its consequences,” asserts ASN Councilor Bruce A. Molitoris, MD, FASN. “If this shift in priorities occurred, I can imagine a scenario where we may need fewer nephrologists.”

Owing to the number of comorbidities, the care of patients with kidney disease involves other physicians besides nephrologists. For example, cardiologists treat heart disease and hypertension, endocrinologists care for patients with diabetes, surgeons perform organ transplants, and critical care specialists are often interventionalists.

“I worry that other specialists will care for a significant number of patients with kidney disease in the future,” says Stuart L. Linas, MD, FASN, who chairs the ASN Hypertension Advisory Group.

“Even if the workforce projections are wrong,” concludes Adler, “nephrology should still try to attract the best medical students, because there will always be a need for experts in kidney disease to care for patients, conduct research, and teach the next generation. I think the best opportunities for nephrologists will be in the academic sphere.”

Tod Ibrahim is executive director of the American Society of Nephrology.