Medicare beneficiaries depend upon specialty care 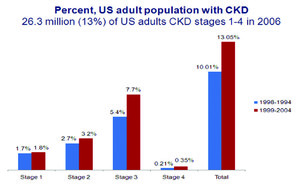 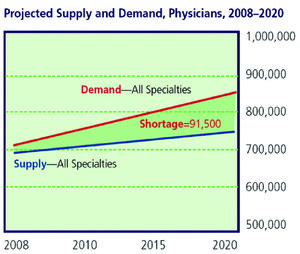 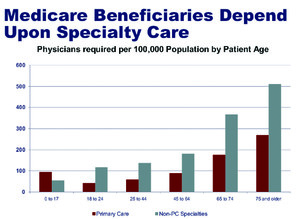 As is the case with many chronic diseases in the United States, chronic kidney disease (CKD) is on the rise. The recent recognition of CKD as a public health problem may be driving patients to nephrologists at earlier stages. At least 26 million Americans have some stage of CKD (Figure 3.1), and minority populations are disproportionately affected. Minorities constitute an increasingly greater portion of the United States population, and incident rates of end stage renal disease (ESRD) among African Americans and Hispanics are nearly four times and 1.5 times greater, respectively, than in whites.

The number of Americans—regardless of ethnicity—with diabetes and hypertension (the leading causes of CKD) is also growing. More than 750,000 people are expected to be alive with ESRD by 2020. These factors will boost the need for kidney care, but they are not the only pressures on the nephrology workforce. The Affordable Care Act (ACA), the aging baby boomer population, and changes to the Medicare ESRD program will each contribute to the need for more nephrologists in the coming decades.

By expanding the number of U.S. citizens with health insurance, the ACA is expected to fuel the demand for physicians, particularly primary care providers. Extending coverage to 32 million formerly uninsured Americans is also likely to increase the number of people with diagnoses of CKD, diabetes, and hypertension. Yet access to health insurance coverage will translate into access to kidney care only if an adequate workforce exists to accommodate the elevated demand.

According to a 2010 report from the Association of American Medical Colleges (AAMC), the United States will face a shortage of 91,500 physicians across all specialties by 2015 (Figure 3.2). The United States in 2002 started to expand its number of medical students, but the total number of residency and fellowship positions funded by the Medicare program has been capped since passage of the Balanced Budget Act of 1997. As the ACA places renewed emphasis on primary care rather than subspecialty care, and as medical students increasingly seek training in fields that are perceived to offer a more favorable work–life balance, nephrology training programs may face greater challenges in recruiting.

Although it is evident that the nation needs more primary care providers, data from the Department of Health and Human Services (HHS) demonstrate that Medicare beneficiaries also depend on the care of subspecialists (Figure 3.3). Encouraging students to enter internal medicine programs is an important step in meeting future health care needs—as will be attracting more of those internal medicine students to specialize in nephrology.

Besides extending insurance coverage, the ACA also encourages more coordinated, patient-centered models of health care delivery. The law specifically establishes Accountable Care Organizations (ACOs), a model intended to facilitate provider coordination, improve quality, and reduce expenditures. Integral to these coordinated care delivery systems is a sufficient number of participating subspecialists to treat patients who need specific expertise and experience, such as those with kidney disease. The nephrologist—a central provider for patients with advanced CKD, ESRD, or a kidney transplant—assumes a critical position in addressing the primary care needs of these patients, who tend to require frequent contact, and also in playing a role in their care-coordination.

Nephrologists are thus expected to become key participants in ACOs for CKD and ESRD patients, analogous to the role suggested for specialists who treat patients with other chronic illnesses, such as asthma. Bolstering the nephrology and primary care workforce will be necessary to ensure that patients with kidney disease receive efficient, high-quality care as ACA implementation moves ahead.

“Giving an additional 32 million access to insurance is a very good start, but may be more of an illusion than a promise of health care,” observes Atul Grover, MD, PhD, AAMC chief advocacy officer. “Unfortunately, the 10,000 baby boomers who will turn 65 every day for the next 19 years will gobble up much of available physicians’ time leaving many Americans without access to a doctor despite whatever the card in their wallet says.”

Grover adds, “Data from HHS suggest that the newly insured could quadruple their need for general internists and internal medicine specialties, like nephrology. In a way, we are a nation that is a victim of its own success in making fatal diseases chronic illnesses—there are five times as many patients living with ESRD today as there were 30 years ago.”

Moreover, even before the ACA is fully in place, nephrologists will play a leading role in piloting models for national health reform. As mandated by the Medicare Improvements for Patients and Providers Act of 2008, the Medicare ESRD Program will institute bundled payments in 2011 and the first-ever true pay-for-performance system in 2012. Each of these models—bundled payments and pay-for-performance—are also called to be tested in other fields of medicine, but nephrology will provide the first indication of their potential to improve outcomes while managing costs.

To ensure accessible, sustainable, and high-quality care in this novel payment environment, the United States needs an adequate supply of nephrologists. Translating this important goal into reality will require a reversal of current trends in medical students’ and residents’ interest in the specialty.

Rachel Shaffer is an ASN policy associate and Mark G. Parker, MD, is a member of the ASN Training Program Directors Executive Committee.