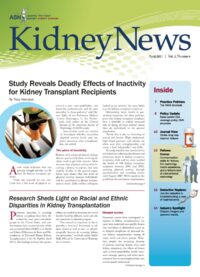 As more patients start dialysis at earlier stages, those with a higher estimated glomerular filtration rate (GFR) at dialysis initiation appear to be at increased risk of death, reports a study in Canadian Medical Association Journal.

Early initiators were at increased risk of death: unadjusted hazard ratio (HR) 1.48. The association was weakened but still significant, HR 1.18, after adjustment for demographic factors, serum albumin level, cause of end stage renal disease, type of vascular access, late referral, and transplant status. The difference in mortality between early and late initiators narrowed after one year. However, the gap started to widen again at 24 months, and remained significant at 30 and 36 months.

In Canada and elsewhere, dialysis is being initiated in patients with higher estimated GFRs. In contrast to the belief that early initiation of dialysis may lead to some advantage in patient outcomes, recent studies have found no survival benefit of starting dialysis at a higher GFR.

The new report provides evidence that patients starting dialysis at a higher GFR are at higher risk of death than those with later initiation of dialysis. The association is attenuated, but remains significant after adjustment for baseline characteristics. Rigorous studies are needed to develop evidence-based guidelines for the optimal timing of dialysis initiation [Clark WF, et al. Association between estimated glomerular filtration rate at initiation of dialysis and mortality. CMA 2011; 183:47–53].