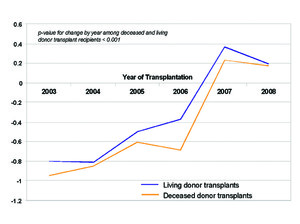 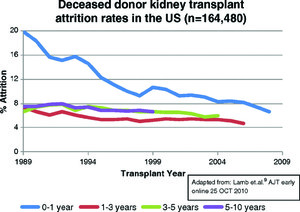 Kidney Transplant Outcomes in the United States:Reason for Optimism

Kidney transplants are being performed in an era when higher-risk donor organs are being used. One could expect, given this scenario, that posttransplant renal function and graft survival would be adversely affected.

Refreshingly, recent studies show that kidney transplant function in the United States has improved in recent years, as has also graft survival.

In a study using Scientific Registry of Renal Transplant Recipients data from more than 90,000 recipients who underwent transplantation between 2003 and 2008, the estimated GFR 6 months after transplant averaged 54.3 mL/min/1.73 m2 (1). The decline in GFR between 6 and 12 months after transplant averaged 0.69 mL/min/1.73 m2 and between 6 and 24 months was 2.45 mL/min/1.73 m2 (Figure 1). The GFR decline was significantly attenuated over the study period among both deceased and living donor transplant recipients. Factors significantly associated with steeper GFR decline were increased pretransplant dialysis time, older donor age, diabetes as a primary diagnosis, low body mass index, African American race, repeat transplants, nonprivate insurance, and elevated panel reactive antibody. Interestingly, baseline renal function or slope in renal function did not differ substantially by immunosuppressive regimen. The 1-year overall graft survival also increased over the study period from 92.3 percent to 93.9 percent.

These findings may reflect increased skill in medical management. They need further evaluation to determine whether short-term improvements translate to improved long-term survival.

In another study that also used data from the Scientific Registry of Renal Transplant Recipients, investigators demonstrated that graft half-life for deceased donor transplants was 6.6 years in 1989 and increased to 8 years in 1995 (2) (Figure 2). By 2005, graft half-life was 8.8 years. Most interestingly, greater improvements in graft survival were made in higher-risk transplants, such as in recipients of extended criteria donor transplants, wherein the half-lives increased from 3 years in 1989 to 6.4 years in 2005.

These results from two separate studies could reflect increased skill in selection, risk stratification, and medical management of highly complex renal transplant recipients. The period studied has also seen considerable improvements in the application of highly sensitive techniques for tissue typing, crossmatching, and assays for donor-specific antibody and refinements in the diagnosis and treatment of acute rejection episode. Such advances have minimized the incidence of hyperacute rejection in non–crossmatch positive transplants.

Over the study period and the era preceding it, the transplant community has also moved away from empirical treatment of graft dysfunction, and considerable refinements in histopathology and the standardization thereof have occurred. Entities such as antibody-mediated rejection can now be diagnosed and treated early and effectively with an ever-growing range of therapies. Over the same timeframe, universal and effective prophylaxis for cytomegalovirus infections has also been used, allowing the effective and safe use of antibody induction and intensified early immunosuppression. Furthermore, greater refinements in the management of the emerging epidemic of polyoma virus nephropathy, with effective screening and appropriate titration of the intensity of immunosuppression, may have mitigated the influence of viral nephropathy in mediating attrition of graft function. Advances in organ preservation such as pulsatile machine perfusion have also contributed to our ability to improve the early function of deceased donor kidneys.

Taken together, these two studies provide the nephrology community with some reason for cautious optimism. The stability of renal function expected of well functioning transplants and also their survival is improving over time.

T. R. Srinivas is a transplant nephrologist and staff physician in the department of nephrology and hypertension at the Glickman Urological and Kidney Institute of the Cleveland Clinic in Cleveland, Ohio.