Development and outcome of acute kidney injury in the elderly patient 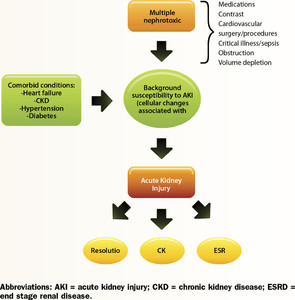 Acute Kidney Injury in the Elderly: A Growing Problem with Important Implications

Elderly persons frequently experience acute kidney injury (AKI). Although studies describing its incidence in this population are difficult to compare because definitions of AKI vary dramatically from study to study, it is clear that the elderly are at the very highest risk for developing the condition. Indeed, Feest and coworkers (1) demonstrated that there is a three- to eightfold progressive, age-dependent increase in the frequency of development of community-acquired AKI in patients over 60.

Over the past 25 years, the mean age of patients with AKI has increased by at least five years and perhaps as much as 15 years (2). Groeneveld et al. (3) demonstrated that the age-related yearly incidence of AKI rose from 17 per million in adults under age 50 to 949 per million in those ages 80–89. A nine-year, prospective study in Madrid demonstrated a 3.5-fold greater incidence of AKI in patients older than 70 (4). Most recently, Ali et al. (5) demonstrated that the average age of patients with AKI in a large European cohort was 76. The average age of patients with acute-on-chronic renal failure was 80.5 years, however, and this group had a much higher risk for adverse outcomes.

The number of patients over 80 entering the intensive care unit (ICU) has increased over time. In a multicenter study of 120,123 adult ICU admissions of more than 24 hours’ duration, the Australian New Zealand Intensive Care Society Adult Patient (ANCIZS) database researchers determined that 13 percent of these patients were 80 or older, and that the admission rate for this age group increased by 5.6 percent per year over the 2000–2005 study period (6). This critically ill population is especially vulnerable to the development of AKI; for example, in the previously mentioned ANZICS database, Bagshaw and colleagues (6) found that 36.1 percent of septic ICU patients developed AKI within 24 hours of admission, and half of these patients were also elderly. A historical cohort analysis focusing on epidemiologic trends for AKI in the ICU determined that 40 percent of 381 critically ill octogenarians had a creatinine level above 1.36 mg/dL, compared with 4 percent in the period before 1978 (7).

Although all causes of AKI are encountered in this age group, prerenal and postrenal etiologies are especially prevalent in elderly patients (8). Furthermore, elderly patients are more frequently subjected to invasive procedures, exposure to multiple (and possibly nephrotoxic) medications, and to radiocontrast agents. The changes in drug metabolism and disposition that occur with aging also contribute to higher risk for drug-induced AKI (9). Although some of the increased susceptibility to the development of AKI in elderly patients can be attributed to clinical variables, specific structural, functional, hemodynamic, and cellular changes that occur with aging predispose the kidney to injury in stressful states.

Predisposing factors to AKI in the elderly

In the absence of a specific disease, the kidney undergoes age-dependent structural and functional alterations leading to a significant decrease in renal mass, functioning nephron numbers, and baseline kidney function.

Although it has been proposed that parenchymal loss in the aging kidney directly confers a higher susceptibility to acute damage, this is not universally supported by experimental data, and the picture is likely more complex. Changes in renal hemodynamics and functional reserve, specific cellular changes such as shortening of telomere length, increased expression of messenger RNA and proteins of candidate genes associated with senescence, declines in cellular antioxidant defenses with aging, and impairment of renal repair processes after injury all contribute to the increased susceptibility of the aging kidney to acute insults (10).

This background susceptibility to AKI is compounded by the numerous nephrotoxic insults to which elderly patients may be exposed (Figure 1). For instance, most elderly patients are taking multiple medications, including drugs that affect renal hemodynamics (such as angiotensin-converting enzyme inhibitors), are directly nephrotoxic (such as antibiotics or chemotherapeutic agents), or can potentiate nephrotoxicity (such as diuretics that may induce volume depletion).

Furthermore, elderly patients are more commonly exposed to potential nephrotoxic procedures such as cardiac catheterization or cardiovascular surgery, which can lead to either nephrotoxic or ischemic acute tubular necrosis. In addition, comorbid conditions such as heart failure, chronic kidney disease, diabetes, and hypertension all serve as independent risk factors for the development of AKI in the elderly. Finally, elderly patients are more susceptible to prerenal (either true volume depletion or decreased effective circulating volume) and obstructive etiologies (such as prostatic disease). Given the multitude of factors, it is not surprising that elderly patients are at the very highest risk for the development of AKI.

Prevention of AKI in the elderly

Prevention of AKI in elderly patients first involves recognizing their increased vulnerability due to normal age-related decline in glomerular filtration rate (GFR) or pathologic chronic kidney disease (CKD) from multiple comorbidities that have accumulated over the lifespan. Because muscle mass decreases with age (11), it is important to calculate GFR using estimating equations (Modification of Diet in Renal Disease or CKD Epidemiology Collaboration) rather than solely evaluating the serum creatinine concentration.

Nearly 50 percent of patients 70 or older have CKD (12), which is the strongest risk factor for AKI (13). Thus, the majority of elderly patients in the ICU will need to have doses of potentially nephrotoxic drugs reduced and have prehydration strategies implemented prior to or concurrent with some agents (radiocontrast, IV acyclovir, amphotericin B, methotrexate). For patients with moderate to severe CKD that need revascularization, off-pump coronary artery bypass grafting has been demonstrated to be effective at reducing the risk for AKI (14).

With specific regard to the prevention of contrast-induced nephropathy, for high-risk patients, volumes of intra-arterial or intravenous radiocontrast should also be limited, and angiotensin-converting enzyme inhibitors and nonsteroidal anti-inflammatory drugs should be withheld, when possible. However, many of the etiologies of AKI are not easily preventable.

No specific therapies for the amelioration of AKI, once it is has occurred, exist for humans. Thus, the management of AKI is largely supportive, through maintenance of adequate renal blood flow, avoidance of further injury, and renal replacement support (if necessary).

The decision to initiate renal replacement therapy (RRT) in elderly persons is potentially controversial, given the possibility that older persons may not fare as well on this aggressive, life-sustaining type of therapy because of patient-based factors such as decreased cardiovascular reserve, autonomic dysfunction, and an increased tendency toward bleeding complications. Recent large randomized controlled trials comparing the intensity or modality of RRT did not perform subgroup analyses on older versus younger patients (15–17).

Studies that have directly examined a possible differential in survival by age in patients with severe AKI receiving RRT have not found any effect modification by older age on hospital survival (7, 18, 19). In fact, several studies demonstrate that mortality from AKI in elderly persons (including AKI requiring RRT) has decreased over the past several years (20–22). This phenomenon does not imply more liberal application of RRT to individuals with AKI who are less ill than past AKI sufferers; rather, the data demonstrate that the reductions in mortality over time were witnessed despite increasing comorbidity and severity of illness. Thus, there is absolutely no evidence to suggest that age alone should be a criterion for withholding acute RRT. The decision must be individualized depending on all of the factors, including the severity of illness, likelihood of meaningful physical and cognitive recovery, and family and patient wishes.

Recovery of renal function and prognosis

The incidence of in-hospital mortality from AKI has been repeatedly shown to increase in association with the severity of AKI (23). Furthermore, several studies have demonstrated that older age itself is an independent risk factor for mortality in patients with AKI in the ICU (24–27). However, the focus in the AKI literature over the past few years has been to examine outcomes in those who survive hospital and ICU admission with AKI. Evidence suggests that more elderly individuals with severe AKI are surviving in the ICU, so the prevalence of long-term adverse consequences related to AKI may represent a substantial burden in the modern era. As with mortality risk, older age itself is associated with a greater chance of nonrecovery of renal function back to baseline after AKI by the time of hospital discharge (28).

Although animal data would suggest an increased fibrotic response in the kidney post-AKI in older versus younger individuals (32), the data from human studies is controversial with regard to whether those with AKI who are older are at higher relative risk for ESRD than younger people. Whereas one study (33) demonstrated a higher relative risk for ESRD in individuals over 65 compared with those under 65, another study (29) showed that the adjusted relative risk for ESRD declined with increasing strata of age. Because older age is clearly a risk factor for death, the relationship witnessed in the latter study may be due to the competing endpoint of death.

Few studies have actually quantified the loss of GFR over time after AKI; however, James and colleagues (34) recently demonstrated that the rate of decline in GFR after mild AKI was 1.0 mL/min/1.73 m2, and 2.8 mL/min/1.73 m2 after moderate or severe AKI (compared with 0.1 mL/min/1.73 m2 in those without AKI). Although this cohort primarily included elderly individuals (mean age 67 years in those with AKI), the patients were not necessarily ICU patients, and thus the ability to generalize these data to the elderly ICU patient is not 100 percent certain.

With regard to absolute numbers, approximately 1.4 million patients aged 65 or older are discharged alive after an ICU admission in the United States annually (35). Because the incidence of AKI in this critically ill population is approximately 30 percent, and the incidence of ESRD after AKI is approximately 26 per 1000 person-years (29, 31), then approximately 11,000 elderly persons per year are developing new ESRD as a result of AKI in the ICU, representing nearly 11 percent of total new cases of ESRD annually in the United States (36). Thus, the focus of upcoming research endeavors should focus on identifying agents or strategies to prevent AKI, ameliorate AKI once it has occurred, and reduce the transition from AKI to CKD/ESRD. In the meantime, clinicians should be highly vigilant regarding postdischarge kidney function in the elderly patient after ICU admission.