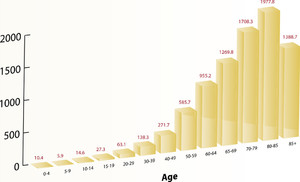 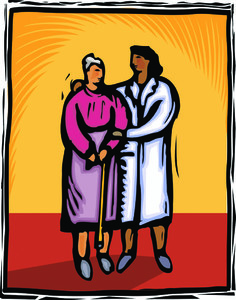 U.S. census data show that the population of individuals over 65 in the United States is growing rapidly and is expected to double over the next 20 years. This means that current fellows can expect to see an increasing number of older patients in professional practice. Average life expectancy is currently around 75.2 years for men and 80.4 years for women, and continues to rise. During the 1990s, the fastest growing population was that of individuals over 85, with 38 percent annual growth, and this group is the largest consumer of health care services.

Of the 35 million people over 65 in the United States, 40 percent have some level of disability relating to sensory, physical, mental, or self-care capacity. Disability greatly impacts the ability of these patients to follow a complex medical regimen, such as that recommended for patients with chronic kidney disease (CKD). Many patients in this age group have lost the ability to administer their own pills, to buy and cook their own groceries, or to drive themselves to office visits or dialysis units. Many other patients, particularly those with diabetes, have difficulties with basic mobility. Coresh et al. have estimated that the overall prevalence of CKD has increased from 10 to 13 percent in the U.S. adult population since 1988, and that most of that growth has occurred in the older population.

The management of elderly patients who require chronic dialysis is even more complex. These individuals frequently have more difficulty with vascular access and more cardiovascular disease that leads to arrhythmias and hypotension while on dialysis. Furthermore, traveling to and from the unit is a greater burden to them. The U.S. Renal Data System has reported that the peak incidence of treated end stage kidney disease (ESKD) has shifted from the 70- to 79-year-old age group, where it has been for the last 15 years, to the 80- to 85-year-old age group (Figure 1). This brings geriatric patients squarely into the domain of the nephrologist.

This demographic imperative prompted the Accreditation Council for Graduate Medical Education (ACGME) to issue a directive on geriatric education for nephrology trainees. This mandate, published in 2008, states that “fellows must have formal instruction, clinical experience and demonstrate competence in the prevention, evaluation, and management of geriatric aspects of nephrology.” Prior to this there had been a number of efforts to promote geriatric nephrology that unfortunately were not very successful. We will describe these efforts to provide a backdrop for the subsequent increase in interest in geriatric nephrology through the American Society of Nephrology (ASN).

In spite of these efforts, interest among nephrologists concerning geriatric nephrology did not increase and, if anything, decreased. Membership to the society and participation at meetings declined and subscriptions and submissions to the journal were not sufficient to sustain it. As a result, the publisher decided to incorporate the journal into a new journal (International Urology and Nephrology), which is now the official Journal of the International Society for Geriatric Nephrology and features a section on geriatric nephrology. The editor-in-chief of International Urology and Nephrology is Dimitrios Oreopoulos.

While these movements and changes were occurring internationally, the Franklin William Scholarship Program, sponsored by the Association of Specialty Professors and funded by the J.A. Howard Foundation and Atlantic Philanthropies, was launched in the United States in 2002 to encourage a new generation of nephrologists with an expertise in geriatric nephrology. Today they have partnered with 11 professional societies, including the ASN, and fund two Two-Year Career Development Awards for junior faculty who are willing to be mentored in geriatrics and devote some of their research efforts to aging-related problems. A total of 10 nephrologists have taken advantage of this program and completed it. We hope that these young nephrologists will be the leaders in geriatric nephrology in the future.

The National Institutes of Health (NIH) has also recognized the growing importance of kidney disease in the aging population and sponsored two workshops to address what is known about kidney disease in the elderly and to identify research gaps and make priorities for resources to address them. The first workshop, held in May 2008, focused on chronic kidney disease in the older adult. Recommendations from this workshop appear in an article in the Journal of the American Society of Nephrology with Sharon Anderson as lead author (1). As a result of this workshop, the NIH will provide grants for research on renal function and chronic kidney disease in aging that will be open until 2012. The second workshop, held in May 2010, focused on acute kidney disease in older adults. A follow-up summary of the group’s recommendations has been accepted for publication and will appear shortly in the Journal of the American Society of Nephrology. It is anticipated that there will be further program announcements linked to this topic.

Mandated training in geriatric nephrology and the role of the ASN

In response to these increases, the ASN invited a group of individuals to form a committee to design a curriculum for teaching geriatric nephrology by identifying topics and authors to write chapters on these topics. The 38 chapters are available free of charge on the ASN website (http://www.asn-online.org/education_and_meetings/geriatrics/).

To promote this educational material, the ASN invited the group to organize a two-day course on geriatric nephrology for Renal Week that has been presented successfully for the years 2008, 2009, and 2010. In the first two years, the authors of the curriculum presented their chapters. Their presentations were audiotaped and are now available at the website mentioned previously.

The AGGN has already made recommendations to the ASN Council for the addition of key words related to aging, biology, and older adults when authors submit abstracts to the ASN program. They have also recommended the institution of an aging section for presentations and posters and an aging track on program participants who wish to seek out related presentations.

Additionally, the AGGN applied for a grant from the National Institute on Aging that has been approved to fund travel for 25 fellows to attend the course in geriatric nephrology during Renal Week 2010. The AGGN also plans to reach out to other societies. An application to the Association of Specialty Professors for a grant toward organizing events in these societies with emphasis on geriatric nephrology is under consideration. The aim is to partner with other societies at annual professional meetings and raise awareness about the special challenges of older people with kidney disease. Such societies include the American Geriatric Society and the Society of General Internal Medicine and Family Medicine.

Special issue of the Nephrology Self-Assessment Program on geriatric nephrology

The highlight of the AGGN’s activity to date has been the preparation of a special issue of the Nephrology Self-Assessment Program (NephSAP) on geriatric nephrology in January/February 2011.

Topics of this issue include:

We expect that this issue will be an important milestone in promoting geriatric nephrology and will contribute to the appropriate care of many elderly patients with chronic renal disease. We are grateful to the editors of NephSAP for agreeing to publish such an issue.

The activities of the AGGN will continue in the future with the overarching goal of promoting education on all issues related to geriatric nephrology, and thus improving the care of elderly patients with kidney disease.

ASN Kidney News thanks editorial board member Edgar Lerma, MD, of the University of Illinois at Chicago College of Medicine for editing this special issues.