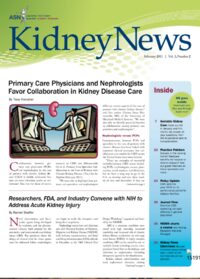 Drug Dosing in the Elderly Patient with Chronic Kidney Disease

Chronic kidney disease (CKD) is a relatively common condition in the older American population. An estimated 26 million people in the United States are reported to have CKD. As the population of Americans 65 and older grows, so does the incidence of CKD. Evidence now indicates that kidney disease and aging carry a significant risk for cardiovascular complications and sudden death.

The progressive physiological changes with the aging process are inevitable: Aging-associated changes in carbohydrate metabolism and vascular atherosclerosis markedly increase the risk of developing diabetes and hypertension, and these high incidences of comorbid conditions may also lead to a higher incidence of cardiovascular events. Aging, directly or indirectly, has an effect on renal function and the handling of the most commonly used drugs in the geriatric population. The elderly with CKD are at a greater risk for adverse drug reactions and have a higher potential for drug–drug interactions (1, 2).

The pharmacokinetics and pharmacodynamics of most drugs are altered due to functional or anatomical changes of the renal system. These structural and functional changes are mostly multifactorial, resulting from the loss of kidney mass and exposure to precipitating factors leading to renal injury. These factors can include clinical nephrotoxins, electrolyte abnormalities, heart failure, and environmental insults.

In early adulthood, the average weight of a kidney is 250 g (±25 g); by age 75, kidney weight decreases to 200 g (±25 g). This loss of mass is most noticeable at the cortex level and much less in the medulla section. Glomeruli are also affected, with biopsies indicating a thickening basement membrane with hyalinization of renal arterioles. The incidence of biopsy-proven glomerulosclerosis increases from 1 to 2 percent in early adulthood, as opposed to roughly 30 percent by age 80+. Chronic vascular disease and inflammatory stages of CKD also contribute to tubular atrophy and interstitial fibrosis in the aging kidney. Other potential causes for loss of renal function could be due to aging-related vascular calcification, the release of endothelin-1 and nitric oxide synthase, free reactive oxygen species, and metabolic syndrome. Medication issues, including polypharmacy with the development of CKD, should also be considered for increased risk of morbidity and mortality (3). 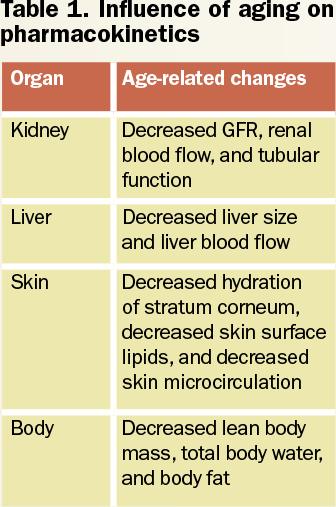 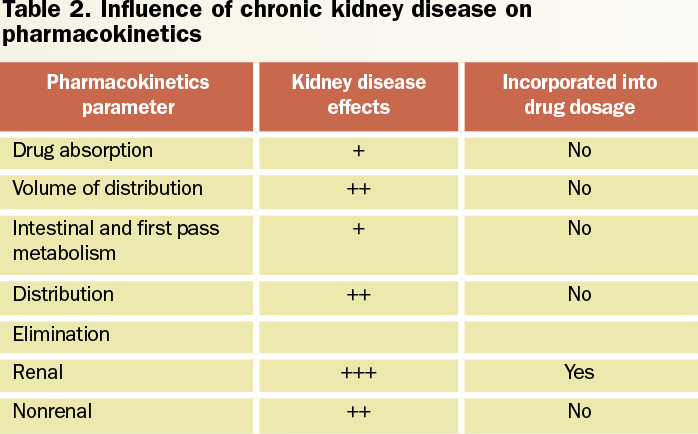 There appears to be no constant alteration in drug absorption in the elderly population or patients with CKD. However, oral iron therapy, calcium supplements, phosphate binders, gastroparesis, nausea, and vomiting related to uremia significantly alter the absorption of most drugs. For drugs requiring a rapid plasma concentration such as a loop diuretic or a narcotic analgesic, the edematous stage of the gastrointestinal tract may influence the pharmacodynamics of these agents. Uremia may decrease drug metabolism in the gastrointestinal area and increase bioavailabilities of some drugs, such as beta-blockers and narcotic analgesics. Aging may also affect transdermal drug absorption: Fentanyl patches may deliver doses at a higher concentration in older patients.

In contrast to drug absorption, the distribution of most drugs changes significantly in older patients with CKD. Both lean body mass and total body water decrease with age. However, CKD may increase the volume of distribution for hydrophilic agents, whereas the volume of distribution maintains or changes for lipophilic agents. These alternations may lead to higher or lower plasma concentrations. For example, gentamicin has a volume of distribution of 0.25 L/kg, which requires closer monitoring in the elderly with impaired renal function than younger patients with the same infection. Drugs are pharmacologically active only in the unbound stage, and are mostly bound to albumin or α-1-acid glycoprotein. In advanced age, albumin levels have a tendency to decrease whereas α-1-acid glycoprotein may increase. For drugs that are highly protein bound, CKD may alter the free unbound concentration. The protein binding of phenytoin is reduced in CKD or in patients with significant proteinuria. In the elderly with CKD, “therapeutic” plasma concentrations could be associated with drug toxicity due to increased free fraction or unbound drug concentration. Therefore, plasma concentration should be adjusted according to albumin level and stage of CKD (4).

Most drugs are excreted unchanged through the kidney, or metabolized through phase I or II reactions. Phase I reactions involve drug oxidation, reduction, and hydrolysis. Cytochrome P-450 also plays an important role in phase I reactions. Phase II metabolism involves glucuronidation, sulfation, acetylation, and methylation. Both aging and CKD reduce the hepatic clearance of many drugs. Phase I reactions are substantially decreased with aging, which has a smaller effect on phase II reactions. Liver mass is approximately 20 to 40 percent lower in elderly patients, with significantly reduced liver blood flow. Uremia may also influence the expression of the cytochrome P-450 isoenzyme system so that patients with CKD cannot metabolize drugs completely. Elderly patients with CKD may achieve a higher plasma concentration or even toxic concentrations of pharmacologic agents when they are prescribed at approved dosages.

Many drugs that metabolize, inhibit, or induce the cytochrome P-450 system and adverse drug reactions due to potential enzyme inhibition are common in older patients with CKD. Despite all of these fluctuations in pharmacokinetic properties due to drug metabolism, clinically, there is no quantitative approach to adjusting drug dosage according to liver function in older patients or patients with CKD. As a result, drug-induced liver injury is more common in the elderly (5).

Reduced renal function may prolong drug half-life and increase the risk of toxicity. To avoid drug toxicity, an accurate estimate of renal function is essential. As mentioned, kidney function generally declines with age. Renal blood flow, tubular function, and filtration are significantly reduced by 70 to 80 years of age. Risk factors for developing drug-induced kidney disease include female gender, age, dehydration, CKD, diabetes, cardiovascular disease, and end stage liver disease. Despite many hopes, there is no reliable clinical predictor of nephrotoxicity in elderly patients. In general, after the age of 30, creatinine clearance (CrCl) declines by 1 mL/min/year with a much higher rate for hypertensive and diabetic patients. The glomerular filtration rate (GFR) is a good overall index of kidney function in both healthy patients and those with CKD.

Clinically, the measurement of GFR is difficult and cumbersome, and has traditionally been estimated using age, weight, serum creatinine, race, and gender. Several methods of estimating GFR have been recommended. CrCl is the most common method, using the Cockcroft and Gault (CG) equation. The CG equation was developed in 1976 from a study of 249 Caucasian males, with and without CKD. Four main factors affect this equation: age, weight, creatinine, and gender. The CrCl using this method tends to overestimate GFR because of the tubular secretion of creatinine (6–8).

The MDRD equation for estimating GFR using the six-point method can be calculated as:

Other methods to measure GFR include a 24-hour urine collection, which is inconvenient for most patients, or the measurement of cystatin C (an endogenous marker), which has not been validated for drug dosing.

These calculations can be downloaded from a number of mobile medical applications from http://www.qxmd.com/calculate-online/nephrology or http://nephron.com for iPhone, iPad, and BlackBerry. It has been speculated that the MDRD method of GFR estimation may improve precision, reduce variation in estimating kidney function, and lead to more consistent drug dosing. However, for most drugs, MDRD equations have not been validated. All of these methods are often found to under- or overestimate renal function. For drug dosing in patients with CKD or the elderly, and in particular for patients with mild renal insufficiency, the MDRD and CKI-EPI equations provide less reliable estimations of renal function than the CG equation, and all three methods lack precision.

Prescribing in the elderly with CKD

Pharmacotherapy drug response in the elderly is associated with significant intra- and interindividual variability. Medication management in the elderly with chronic kidney disease is a challenging task. Pharmacokinetic and pharmacodynamic variability associated with aging and CKD should be incorporated into the treatment plan for optimal therapy. A clinical treatment plan should include the type and severity of kidney disease, comorbid conditions, level of renal function, drug interactions, and cost. There are no simple rules for drug dosing in CKD that can be applied to the elderly population. If possible, for most medications, the advice is: “Start slow and go slower.” For infection complications, however, health care providers need to be more aggressive about providing optimal care while reducing adverse drug reactions. If possible, providers should follow these steps: 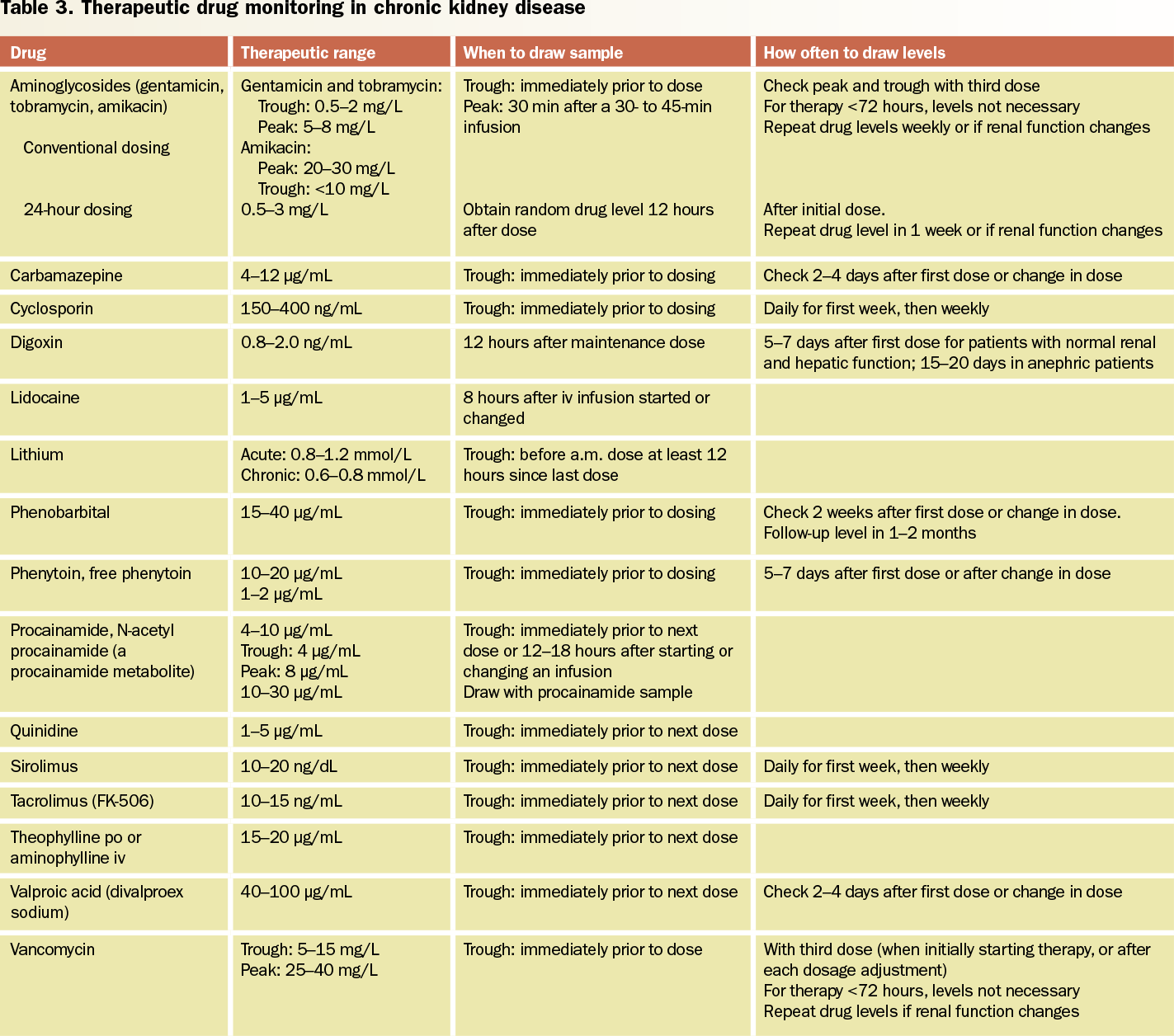 Pharmacotherapy in the elderly with CKD remains a challenging task. Rational drug therapy for elderly patients with CKD requires an adequate knowledge of disease status, comorbid conditions, and the pharmacokinetic and pharmacodynamic properties of the selected drug. Understanding the time course of drug effects (absorption, distribution, metabolism, and elimination) is vital for avoiding drug toxicity while optimizing the clinical outcome.

Aly Olyaei, PharmD, is professor of medicine and pharmacotherapy in the division of nephrology and hypertension at Oregon State University.