Coronary heart disease risk in the context of age and level of BP. Data adapted from Lewington et al. (1) and Weber (2). 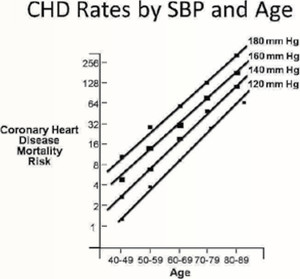 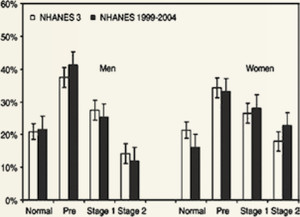 Hypertension in the Elderly: Two Decades Later, What Have We Learned Since the SHEP Trial?

Hypertension is common in people 60 and older. With increasing age, it is more likely that someone will experience hypertension and die of coronary heart disease even in the prehypertension range (1, 2) (Figure 1). According to the National Health and Nutrition Examination Survey (NHANES) 1999 to 2006, approximately 67 percent of adults in the United States 60 and older had hypertension, a 10 percent increase from NHANES 1988 to 2004 (3). African Americans and women had a higher prevalence of hypertension than did white individuals, and in those 70 and older the hypertension was more poorly controlled than in those 60–69 (3) (Figure 2).

Definition and significance of hypertension

The Joint National Committee on Prevention, Detection, Evaluation and Treatment of High Blood Pressure (JNC 7) defines stage 1 hypertension as a systolic BP ≥140 mm Hg or a diastolic BP ≥90 mm Hg (4). Isolated systolic hypertension is a systolic BP ≥140 mm Hg but a diastolic BP of ≤90 mm Hg. It affects about two thirds of individuals above age 60 and approximately 75 percent of those over age 75. Among older individuals, systolic BP is a stronger predictor of cardiovascular disease events and end stage renal disease (5).

Aging and pathophysiology of hypertension

Aging is associated with a reduction in arterial compliance, primarily affecting the aorta and other large blood vessels. Alterations of various collagens in the vessel wall decrease elasticity and increase fibrosis and sclerosis of the blood vessels. As a result, arterial stiffness increases, and distensibility of the larger arteries decreases, resulting in widened pulse pressure. The Framingham Heart Study suggested that both systolic and diastolic BP increase in parallel until the age of 50. Thereafter, systolic BP continues to rise and diastolic BP drops, resulting in a widened pulse pressure (6).

Salt sensitivity is defined as an increase in systolic pressure of >10 mm Hg over a few hours after the intake of a fixed amount of salt. Salt sensitivity plays an important role in the pathophysiology of hypertension in the elderly. Older individuals are relatively more salt sensitive than are people under age 50 because of a variety of factors, including reduced nitric oxide from the endothelium in response to various stimuli, loss of integrity of various collagen subfractions, and altered handling of sodium by the kidney. Some contributing factors in the kidney include reduced generation of prostaglandins and dopamine in response to vasoconstrictor stimuli, and increased oxidant stress directly mediated by high sodium intake (7, 8). Age-associated decline in the activity of membrane sodium/potassium–ATPase may increase intracellular sodium and reduce sodium–calcium exchange. This increases intracellular calcium and vascular resistance. Reductions in cellular calcium efflux due to reduced calcium–ATPase activity may have a similar effect (9).

BP goal in the elderly

The JNC 7 guidelines suggest a goal BP of <140/90 mm Hg in all patients, including the elderly. However, we have learned from the Systolic Hypertension in Elderly Program (SHEP) that among patients with isolated systemic hypertension, reduction of diastolic BP below 60–65 mm Hg after the initiation of antihypertensive therapy is associated with higher cardiovascular event rates. Since the SHEP, several retrospective studies have supported this contention (10–12). The results of these analyses suggest that optimal reduction in diastolic BP in the elderly should not exceed 60–65 mm Hg during attempts to reduce the systolic BP below 140 mm Hg. The key exception to this recommendation is a history of angina; patients so affected should maintain a diastolic pressure >80 mm Hg.

Approach to hypertension in an elderly patient

Lifestyle modifications such as weight reduction and restriction of salt intake to <3 g/day reduce BP effectively. Elderly individuals tend to ingest increasing amounts of salt because of their diminished taste sensitivity (13).

The efficacy of weight reduction and salt restriction in elderly patients was studied in the Trial of Nonpharmacological Interventions in the Elderly (TONE) (14). In TONE, 975 patients aged 60 to 80 years with a BP below 145/85 mm Hg while receiving treatment with a single antihypertensive medication were each randomized to one of four groups: salt restriction, weight reduction, both salt restriction and weight reduction, and usual care. The primary endpoint was an elevated BP at one or more study visits after withdrawal of antihypertensive medication, need for continual treatment with antihypertensive medication, or a cardiovascular event. Of those who restricted their salt intake, 38 percent did not achieve the primary endpoint in comparison with 24 percent in the usual care group. In the weight loss group, 39 percent remained free of primary endpoints in comparison with 26 percent. In the weight loss and salt restriction group, the results were even better: 44 percent versus 16 percent did not have an increase in BP (14). In this study, the goal of sodium restriction was 1.8 g/24 hours (approximately ⅔ teaspoon/day), and the goal for weight reduction was 10 pounds.

Elderly patients are more likely than younger individuals to take nonsteroidal anti-inflammatory drugs (NSAIDS) for arthritis pain. NSAIDS cause edema and hypertension by inhibiting the production of vasodilatory prostaglandins (15). The use of NSAIDS increases BP as much as 6 mm Hg (16). Furthermore, NSAIDS can interfere with the antihypertensive effects of all agents except calcium antagonists. Therefore, they should be used sparingly in the elderly hypertensive population (17).

The Blood Pressure Treatment Trialists Collaboration, a meta-analysis of 31 trials involving 190,606 patients with a mean age of 65 years, concluded that all classes of antihypertensive agents were equally successful in reducing the risk of cardiovascular events (18). The reduction in risk was directly proportional to the reduction in the systolic BP. More recently, the benefits of lower BP in patients over age 80 were demonstrated in the Hypertension in the VERY Elderly Trial (20). In this study, 3845 patients 80 or older who had a systolic BP of ≥160 mm Hg were randomized to indapamide or placebo. The angiotensin-converting enzyme inhibitor perindopril or matching placebo was added to achieve a BP of 150/80 mm Hg if necessary. The primary endpoint was fatal or nonfatal stroke. After two years, the treatment group showed a 30 percent reduction in stroke, a 21 percent reduction in death, a 23 percent reduction in cardiovascular death, and a 64 percent reduction in heart failure (20). These results support the use of antihypertensive medications in patients above 80 years of age.

Various treatment guidelines note that the selection of antihypertensive agents should be based on the presence or absence of concurrent medical conditions. Since the SHEP, several studies in the elderly have yielded the following observations, which are consistent in all trials. First, as single agents, calcium antagonists and thiazide-type diuretics provide the greatest relative reductions in BP compared with other classes. Second, all trials in the elderly clearly show that two or more agents are needed to achieve BP goals, i.e., a systolic pressure of <140 mm Hg or at least <160 mm Hg in patients with very poor vascular compliance (21–23). Note that two-drug combination therapy should be given to patients whose BP is more than 20/10 mm Hg above their respective goals. Third, it appears that a blocker of the renin–angiotensin system may provide a greater benefit to cardiovascular and renal risk reduction than a diuretic; this is supported by data from ACCOMPLISH, an outcome trial in 11,506 people with a mean age of 68 years (23, 24). Last, initial doses of antihypertensive agents in elderly patients should be low because these patients are more prone to orthostatic hypotension, dehydration, and electrolyte imbalances. Patients should be closely monitored for symptoms and side effects, and electrolyte levels and kidney function should be monitored every few months.