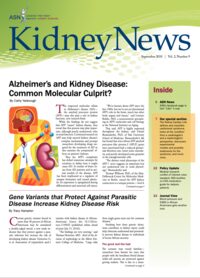 Certain genetic variants found in more than 30 percent of African Americans may be considered a double-edged sword: a new study indicates that they protect against a parasitic infection but increase the risk of developing kidney disease (Genovese G, et al. Association of trypanolytic spoL1 variants with kidney disease in African-Americans. Science. doi: 10.1126/science.1193032 [published online ahead of print July 15, 2010]).

“The findings are very exciting,” said Thomas Hostetter, MD, chief of the division of nephrology at the Albert Einstein College of Medicine. “Large risks from single genes seem rare for common diseases.”

The good and the bad

The scenario may sound familiar—researchers have known for years that people with the hereditary blood disease sickle-cell anemia are protected against getting malaria. This is due to a mutation in a hemoglobin gene found in red blood cells that causes the cells to take on a sickle shape. These sickled cells are not conducive to harboring malaria parasites, which live inside red blood cells. Unfortunately, individuals with two gene copies of the mutation have full sickle-cell disease and in traditional societies rarely live beyond adolescence. People with only one gene copy may have only a low level of anemia, but they benefit from a greatly reduced chance of serious malaria infection.

This latest research offers another example of how natural selection can favor harmful mutations if they also confer some form of benefit. Here, the gene involved is called APOL1, which is found on chromosome 22 and encodes apolipoprotein L-1. Apolipoprotein L-1 derived from genetic variants found in many African Americans—but not those found in Europeans and other groups—kills Trypanosoma brucei rhodesiense, a trypanosome parasite that causes African sleeping sickness.

To come to that conclusion, Pollak and his collaborators scoured data from the 1000 Genomes Projects—which is sequencing DNA of individuals from around the globe—to uncover two alterations (G1 and G2) in the APOL1 gene that are associated with hypertension-attributed end stage kidney disease as well as focal segmental glomerulosclerosis, which involves the buildup of scar tissue in parts of the kidney. Comparing individuals with zero or one variant to those with two variants, the investigators found that people with two variants were 10.5 times more likely to have focal segmental glomerulosclerosis and 7.5 times more likely to have end stage kidney disease.

The scientists also discovered that G1 was present in the chromosomes of many Yoruba people, who live in Nigeria, but not in any chromosomes from European, Japanese, or Chinese individuals. Similarly, G2 was detected in chromosomal sequence data from several Yoruba subjects, but not in the other three ancestral groups.

African sleeping sickness occurs only in sub-Saharan Africa in regions where there are tsetse flies that can transmit the disease, according to the World Health Organization. In affected individuals who do not receive treatment, the parasite invades the central nervous system, leading to confusion, sensory disturbances, poor coordination, disturbance of the sleep cycle (which gives the disease its name), and eventually death. While individuals in developed countries do not need protection against infection, at one point in history the APOL1 gene variants seem to have provided an important survival advantage against African sleeping sickness to ensure their persistence through natural selection. This could explain their widespread prevalence today in modern cultures, where their positive effects no longer balance out their negative effects on the kidneys.

These latest research findings may help explain why African Americans have higher rates of kidney disease than European-Americans, and they could improve our understanding of kidney disease by revealing key pathways involved in kidney injury. Much more work remains to fully understand how the APOL1 variants play a role in injuring the kidneys.

“We need biologic and genetic studies to see what’s going on with the APOL1 variants and how they affect the kidneys,” said Pollak. “This gene is present only in humans and certain other primates, so it’s difficult to study in the lab.” In addition, not everyone with two variants develops kidney disease, so additional studies are needed to determine what other factors are involved in affected individuals.

Further research is also needed to determine whether the findings might have diagnostic and therapeutic utility. “We need more clinical studies to see who should be screened and if they might be treated,” said co-author Jeffrey Kopp, MD, of the National Institute of Diabetes, Digestive, and Kidney Disease, in Bethesda, MD. “If you test people with kidney disease and they are positive for the variants, what will you tell them to do differently? And would you treat them early, before any signs of kidney disease show up?” he asked.

Pollak noted that the research could help guide other gene discovery efforts. “We think this study might help in efforts that are looking for other genes that might have both beneficial roles, like resistance to infectious parasites, and detrimental roles, like increased risk of certain diseases,” he said.

The work might also impact care for individuals in sub-Saharan Africa who develop African sleeping sickness. Perhaps man-made versions of altered apolipoprotein L-1, or even plasma from people who carry the G1 or G2 variants, could be effective new treatments.