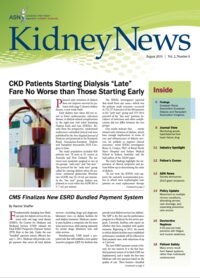 The type 2 diabetes drug Avandia (rosiglitazone; manufactured by GlaxoSmithKline [GSK]) is in the news again. Two separate and dissimilar studies found Avandia increased the risk of heart attack and other conditions.

These studies set the stage for a public debate within the U.S. Food and Drug Administration (FDA) advisory panel, which convened to discuss the safety of Avandia in July. After hearing the evidence and many presentations, most of the 33 panel members recommended the continued sale of Avandia with new usage restrictions or warnings on the drug’s labeling. Twelve panel members said the drug should be fully withdrawn.

The panel’s general conclusion was that although Avandia does increase the chance of a heart attack, its chances of increasing the risk of mortality are very small. According to the Boston Herald, most panel members felt it was important to keep Avandia on the market as an alternative to Actos (pioglitazone; manufactured by Takeda Pharmaceuticals, Osaka, Japan), another drug for type 2 diabetes, because not everyone will have an effective course of treatment with Actos.

The European Medicines Agency will conduct a review of Avandia in a manner similar to that of the FDA’s review. The agency could then revoke or change marketing authorization for the drug in Europe.

The other study, by outspoken and long-time Avandia opponent Steve Nissen of the Cleveland Clinic, found a 39 percent higher chance of heart attack in patients who used Avandia. Nissen’s results were published in the Archives of Internal Medicine in an updated study on Avandia; in 2007, Nissen and his research team found and reported a similar increased risk of heart attacks and heart failure in patients who used the drug.

Avandia can present several challenges, including heart-related adverse events such as fluid retention and congestive heart failure. The drug is monitored per FDA directives for these and other events.

Overall, shares of GSK have fallen 13 percent in the past year, according to Bloomberg Businessweek. To date, more than 4000 lawsuits have been filed against GSK because of Avandia’s effects on the heart and circulatory system. In May, the company agreed to pay $60 million in the first settlements of the litigation, according to sources familiar with the agreement, Bloom berg Businessweek reported.

Avandia’s use fell sharply after Nissen’s first study, but the medicine is still widely prescribed, with sales of $1.2 billion in 2009, Reuters reported. It loses patent protection in 2012.

The Graham study convinced epidemiologist Corinne de Vries of the University of Bath, United Kingdom, of the drug’s problems. “I can’t fault it, and I suspect it might be the nail in the coffin for rosiglitazone,” she said in a news report for the journal Nature.