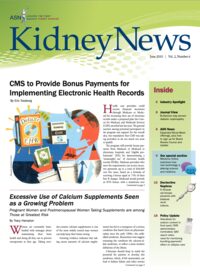 Excessive Use of Calcium Supplements Seen as a Growing Problem

Women are constantly bombarded with messages about maintaining their bone health and doing all they can to prevent osteoporosis as they age. Taking over-the-counter calcium supplements is one of the most widely touted ways women can help keep their bones strong.

Growing evidence indicates that taking excess amounts of calcium supplements has led to a resurgence of a serious condition that hasn’t been on physicians’ radars since the early 1900s—the milk-alkali syndrome. Researchers now suggest renaming the condition the calcium-alkali syndrome, to reflect a more modern definition of the illness.

Clinicians should keep in mind the potential for patients to develop this syndrome, which, if left unattended, can lead to kidney failure and other serious complications. In addition, nephrologists and others who care for patients experiencing kidney dysfunction should be aware of the possible role of calcium supplementation in the development of their patients’ symptoms.

History and mechanisms behind the milk-alkali syndrome

The milk-alkali syndrome was first identified in the early 20th century when patients with peptic ulcers were treated with a regimen consisting of milk and antacids. The theory was that gastric acidity was the fueling force behind chronic ulcer disease, and that the milk-alkali treatment would protect the ulcer from gastric juice corrosion until the ulcer was healed. Throughout the day, patients drank a mixture of milk and cream and consumed substantial amounts of alkali. Due to its success, the milk-alkali therapy shortly became the standard of care for ulcer treatment. However, an unfortunate adverse effect was the development of hypercalcemia, various degrees of kidney failure, and metabolic alkalosis (Medarov BI. Mayo Clin Proc 2009; 84:261–267).

The pathogenesis of the syndrome is intricate and involves multiple systems, including bone, intestine, and kidney. The exact mechanism of the milk-alkali syndrome remains uncertain, but a unique interplay between hypercalcemia and alkalosis in the kidneys seems to lead to a self-reinforcing cycle. Absorption of large doses of calcium may lead to suppression of parathyroid hormone, which then produces enhanced bicarbonate retention by the kidney. Continued ingestion of calcium carbonate and bicarbonate retention leads to alkalosis, which causes increased calcium resorption in the kidneys. Also, hypercalcemia can lead to nephrogenic diabetes insipidus.

When histamine2 blockers and proton pumps were introduced as alternative treatments to the standard milk and antacid regimen, the incidence of the milk-alkali syndrome became rare. In the 1970s and 1980s, the syndrome was considered responsible for less than 1 percent to 2 percent of hypercalcemia cases (Beall DP, Scofield RH. Medicine Baltimore 1995; 74:89–96).

Physicians are noticing a resurgence of the milk-alkali syndrome because of the wide availability and increasing use of calcium supplements (particularly calcium carbonate), which are mostly taken to prevent bone loss and the development of osteoporosis. Research suggests that 8.7 percent of the American public takes calcium supplements (Kaufman DW et al. JAMA 2002; 287:337–344). Only multivitamins, vitamin E, and vitamin C are taken by a greater percentage of the population. Calcium is the second highest selling U.S. dietary supplement, behind multivitamins. The use of dietary supplements is primarily self-initiated rather than practitioner based.

The milk-alkali syndrome is now believed to be the third most common cause of in-hospital hypercalcemia (after hyperparathyroidism and malignant neoplasms), with a prevalence of 9 percent to 12 percent among hospitalized patients with hypercalcemia. In one study of patients hospitalized for emergent hypercalcemia, milk-alkali syndrome was the underlying cause in six (12 percent) of 49 patients admitted over a four-year period (Beall DP, Scofield RH. Medicine Baltimore 1995; 74:89–96).

Stanley Goldfarb, MD, and Ami Patel, MD, of the Renal-Electrolyte and Hypertension Division at the University of Pennsylvania School of Medicine in Philadelphia, recently recommended changing the name of the milk-alkali syndrome to the calcium-alkali syndrome because the condition is now associated with a large intake of calcium, not milk (Patel AM, Goldfarb S. J Am Soc Nephrol 2010; doi:10.1681/ASN.2010030255 [published online ahead of print April 22, 2010]).

The condition usually has no symptoms, but when symptoms do occur, they may include back, middle of the body, and loin pain related to kidney stones, as well as excessive urination, fatigue, nausea, and other problems that can result from kidney failure (http://www.nlm.nih.gov/medlineplus/ency/article/000332.htm). If left unattended, patients with the milk-alkali, or calcium-alkali, syndrome may eventually need to be hospitalized.

Because the amount of calcium carbonate that has been reported to induce the milk-alkali syndrome varies from 4 to 60 grams per day, factors besides calcium intake must contribute to the development of the syndrome (Felsenfeld AJ, Levine BS. Clin J Am Soc Nephrol 2006; 1:641–654). Postmenopausal women, pregnant women, transplant recipients, patients with bulimia, and individuals who are on dialysis have the highest risks of developing the milk-alkali/calcium-alkali syndrome due to various physiological reasons (Patel AM, Goldfarb S. J Am Soc Nephrol 2010; doi: 10.1681/ASN.2010030255 [published online ahead of print April 22, 2010]).

Older patients are susceptible to advertising regarding the use of calcium supplements for the treatment of osteoporosis. Pregnant women experience enhanced calcium absorption through the gut. Patients with anorexia nervosa occasionally have fetishes for food rich in calcium. Cardiac transplant patients are sometimes given calcium carbonate as part of their therapy. And dialysis patients often ingest large amounts of magnesium oxide and calcium carbonate.

The obvious preventive strategy against the milk/calcium-alkali syndrome is to limit the intake of calcium to no more than 1.2 to 1.5 grams per day, said Goldfarb. In addition, supplementing calcium in a form that contains no absorbable alkali may be a wise choice.

“Calcium supplements taken in the recommended amounts are not only safe but are quite beneficial. Taken to excess is the problem,” Goldfarb said.

Even then, careful monitoring of any medication is wise, and yearly determinations of blood calcium levels for those patients taking calcium supplements or vitamin D is a good idea, he added. The therapeutic dose of calcium carbonate and the toxic dose of calcium carbonate are only about twofold different, at least for some individuals, according to Hal Scofield, MD, professor of edocrinology, metabolism, and diabetes and associate dean for Clinical & Translational Research at the University of Oklahoma Health Sciences Center, in Oklahoma City. The usual prescribed dose is 1200–1500 mg of elemental calcium for postmenopausal supplementation, while 2500–3000 mg of elemental calcium as the carbonate salt can produce the milk/calcium-alkali syndrome.

The development of the milk/calcium-alkali syndrome in women taking excess calcium highlights the potential dangers of taking too much of an over-the-counter medication or supplement that is ordinarily considered beneficial. “It is hard to generalize about this but many vitamins and supplements can lead to real clinical problems if taken to excess,” Goldfarb said. “There are many other examples including use of Tylenol with coexistent liver disease, use of aspirin with a coexistent gastrointestinal ulcer, use of nonsteroidal anti-inflammatory agents in patients with hypertension.”

For most women, the chances of developing complications from osteoporosis are much higher than the risk of developing the milk/calcium-alkali syndrome. Even after its recent resurgence, the milk/calcium-alkali syndrome remains a relatively rare condition especially considering the widespread use of supplemental calcium, said Boris Medarov, MD, of the division of pulmonary and critical care medicine at the University of Southern California’s Keck School of Medicine in Los Angeles. However, certain individuals should be particularly careful about their calcium intake.

“The average woman should not be concerned about it if she is healthy otherwise and she doesn’t exceed the recommended daily dose of calcium, but individuals who suffer from kidney failure or chronic vomiting are more susceptible to the syndrome and should be especially vigilant about their calcium intake,” said Medarov. “Those people need to consult their doctor regarding taking calcium supplements.”

Pregnancy likely places women at risk for the syndrome due to increased intestinal absorption of calcium. Scofield and his colleagues performed a retrospective chart review of pregnant women with preeclampsia who were admitted for delivery to the University of Oklahoma Health Sciences Center. They found that 29 of the 100 pregnant patients had blood calcium levels above normal when corrected for low serum albumin compared with only six of 100 nonpregnant women who were admitted (Addington S et al. J Okla State Med Assoc 2006; 99:480–484). (He noted, however, that the correction of serum calcium for low serum albumin is not accurate in pregnant women.) One pregnant woman in the group developed the milk/calcium-alkali syndrome after taking 75 to 100 antacids a day for gastrointestinal symptoms occurring at the end of her pregnancy.

For individuals who do develop milk/calcium-alkali syndrome, ceasing intake of calcium supplements is of utmost importance. In addition, supportive therapy and hydration are helpful. Luckily, this condition is often reversible if kidney function remains normal. In refractory cases, hemodialysis may occasionally be necessary.