Picture of Dr. Joseph Murray with dogs that had kidney transplants. 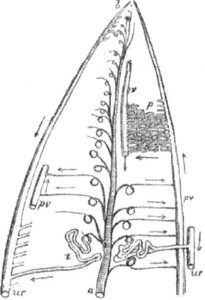 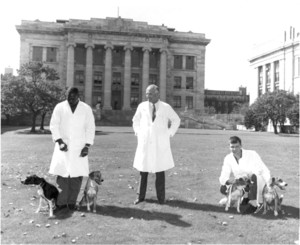 Animal Research in the Development of Kidney Transplantation

The kidney maintains a proper fluid and electrolyte balance in our body, plays a major role in regulating blood pressure, and filters out waste products from the bloodstream for excretion from the body as urine. In addition, it is the source of the hormone erythropoietin and the active form of vitamin D. How has animal research contributed to treatment of kidney failure?

All who benefit from animal research, who work for the betterment of humankind and animals, must make our voices heard …

Galen first identified the kidney as the source of urine based on his studies of nonhuman primate anatomy. In the 19th century, Sir William Bowman (for whom Bowman’s capsule is named) greatly expanded our knowledge of renal function based on his studies of kidneys that included exotic animals such as boa constrictors and parrots (1) (Figures 1 and 2). Subsequent discoveries of renal function also relied heavily upon animal studies. Historical reviews of kidney research provide considerable detail of the elegant physiological studies that led to our present understanding of the workings of the kidney (2).

During World War II, injuries to soldiers demanded new therapies to heal wounds. Joseph Murray, MD, found himself at a Veterans Administration hospital facing the challenge of treating a badly burned airman who needed skin grafts but did not have enough intact skin to provide these grafts. Knowing that allografts of cadaver skin would soon be rejected by the airman’s immune system, Murray did them anyway to buy time for the airman to recover sufficiently so that autografts of his skin could be made to heal his wounds (3).

Ultimately this success led Murray to his interest in developing the kidney transplant technique, for which he ultimately received the Nobel Prize in Physiology or Medicine in 1990. A colleague and good friend discouraged Murray from taking on this challenge, saying “… you may ruin your whole future.” Despite opinions among nephrologists that this was a “fools’ errand,” Murray joined the Harvard kidney transplant group (3).

In his autobiography (3), Murray takes great pains to acknowledge the importance of animal models in perfecting the kidney transplant technique. To overcome difficulties with hemostasis, denervation, and other surgical issues, Murray first did autotransplants, fully removing the kidneys from dogs and relocating them in another optimal location. After autotransplanted dogs had survived for three years, Murray and his colleagues carried out the first successful human kidney transplant using identical twins as donor and recipient.

The problem of rejection made the operation unattainable for everyone other than identical twins. E. Donnal Thomas, another Nobel Prize winner, attained some success by using radiation to kill the lymphocytes that carried out the immunological rejection of the transplanted organ; however, there were more failures than successes. A better procedure was still needed.

The breakthrough came five years later. Drs. Robert Schwartz and William Dameshek used an anticancer drug, 6-mercaptopurine (6-MP) to stop immunological rejection of a foreign protein in rabbits (4). Soon thereafter Drs. Murray and Roy Calne used 6-MP concomitantly with transplantation of an allograft kidney in a dog. The transplant was a success!

Additional kidney transplant experimentation in dogs with analogs of 6-MP synthesized by Drs. George Hitchings and Gertrude Elion of Burroughs-Wellcome, Ltd., led to the development of azathioprine (IMURAN) as a superior agent for prevention of rejection of the transplanted kidney. Further tests of the kidney transplant dogs showed that they retained normal immune function, indicating that the effects of 6-MP and azathioprine were short-lived, just long enough to allow the body to accept the foreign antigens that characterized the transplanted organ. This research ultimately led to the first successful cadaveric kidney transplant into a human in 1962 by Dr. Murray (5), a success soon repeated in hospitals worldwide.

While the success rate for kidney transplants soared, there was still room for improvement. Azathioprine did not always prevent rejection of the transplanted kidney. It had toxic side effects and could be lethal. Indeed, the first human transplant patient treated with azathioprine died from its toxicity.

Once again biomedical researchers used animals to develop drugs with greater efficacy and fewer adverse side effects. Orthoclone, OKT3 (generic name: muromonab-CD3), the drug that Patty was treated with, was the first monoclonal antibody drug to be approved by the Food and Drug Administration (FDA) in 1986 (see article on facing page). Monoclonal antibodies are produced by fusing a single precursor cell from a mouse spleen with a human myeloma cell, allowing the cells to proliferate and produce a single, specific antibody to CD3 T cells. Initially these were then grown in the peritoneal cavity of other mice, although now they can be cultured and harvested in vitro.

Orthoclone OKT3 targets a specific antigen (CD3) on T cells (the type of blood cell responsible for mounting an immunological attack on foreign antigens such as those of transplanted kidneys). When the monoclonal antibody binds to CD3 on the surface of the T cell, it initiates an immune attack on the T cell leading to its destruction. This drug has a short-term effect to prevent acute organ rejection, but also has long-term effects that fundamentally alter the immune system to make it tolerant of the transplanted organ.

The other drug that Patty credits with saving her life, erythropoietin (EPO, EPOGEN) came about through research in sheep. Patty’s physician, Joseph Eschbach, in collaboration with John Adamson demonstrated that EPO is a hormone produced by the kidney that acts upon the bone marrow to stimulate the production of red blood cells. Without this hormonal stimulation, red blood cell production may not be adequate to meet the needs of oxygen transport in the bloodstream, leading to anemia and chronic weakness. Patty was one of the many patients in whom this Phase II clinical trial (6) established the efficacy of EPOGEN, leading to its approval for use in humans in 1989.

Animal research, from its primitive underpinnings to modern-day molecular biological advances, played an essential role in the development of kidney transplantation and other tools for the management of chronic kidney disease. As we face the ongoing challenges of human and animal health, animal research continues to play a pivotal role.

A former Secretary-General of the United Nations, Dag Hammarskjold, once wrote, “The madman shouted in the market place. No one stopped to answer him. Thus it was confirmed that his thesis was incontrovertible.”

All who benefit from animal research, who work for the betterment of humankind and animals, must make our voices heard so as not to be shouted down by those who would deny us progress against the diseases that shorten and impair our lives.

Robert Speth is a professor of pharmaceutical sciences at Nova Southeastern University in Fort Lauderdale, Fla. He is a member of the board of directors of the National Animal Interest Alliance and a former president of the Society for Veterinary Medical Ethics.