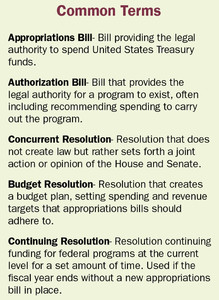 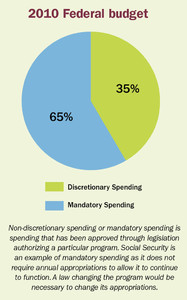 Understanding the Appropriations Process: A primer for doctors

Article I of the U.S. Constitution creates the legislative branch and with it the power to raise revenue—a power given to the House of Representatives exclusively. However, the Constitution does not address which body (House or Senate) can appropriate this revenue. While the Senate throughout its history has championed a strict interpretation of this article (an interpretation which would allow the Senate to act first on appropriating money) the House has traditionally declined to act on appropriations bills that originate in the Senate, sending the bills back with a note admonishing it for attempting to usurp the legislative authority of the House. However, despite this Constitutional wrangling, both chambers in effect assist equally in crafting appropriations.

While Congress ultimately passes the budget, the process actually begins well in advance with the Executive branch. The President is required by law to submit a budget to Congress no later than the first Monday in February for the upcoming fiscal year. Work on this budget proposal starts months before, with federal agencies submitting their individual budget requests to the Office of Management and Budget (OMB, the White House office that oversees creation of a budget) for consideration and inclusion in a larger budget proposal.

Upon receipt of the President’s budget proposal, a budget committee in both the House and Senate begins work on their individual separate budget proposals. A budget proposal sets the overall spending cap for the upcoming fiscal year while also setting the general framework for allocation of these funds across various federal agencies. Each chamber votes on their respective budget resolutions typically in the spring. Any discrepancies between the two proposals are negotiated on in a conference committee consisting of both House members and Senators. This committee is charged with crafting one resolution out of the two different resolutions. As a budget resolution does not create any new programs, it also does not authorize any new expenditures. As such, it does not require a Presidential signature (Figure 2).

Allocation of federal funding continues in the late spring with the House and Senate Appropriations Committees. These committees allocate discretionary spending across 12 groups, each aligned with a specific subcommittee. The Committee on Appropriations only allocates discretionary spending, which includes investments in NIH and other government-funded medical research.

A seat as an appropriator allows an individual Congressional member significant influence over a specific sector of the budget. Upon completion of appropriations bills, each committee submits their respective bills to the full chamber for passage. The same reconciliation process takes place between the House and the Senate in a conference committee to craft one appropriations bill that must again be passed by both chambers before being sent to the President for a signature or a veto.

What seems like a well oiled machine, in recent years the appropriations process has often broken down as appropriations bills stall. This forces Congress to pass what is called a “continuing resolution” to stave off a government shutdown for lack of funding. A continuing resolution simply extends the funding levels of the current year for a determined amount of time.

On September 30, 2010, Congress passed a continuing resolution extending current government funding through December 3, 2010, after the midterm elections. When Congress reconvenes in November after the midterm elections, legislators will likely continue working on 2011 appropriations, weighing important decisions around funding for the numerous federal agencies and programs that rely on discretionary spending to operate. While it remains unclear when work on the 2011 appropriations bills will be completed, the anticipation is for the process to be wrapped up sometime in December before Congress adjourns for the holidays.